TCU has officially sold out of reserved seating for its inaugural 2012 season, leaving general admission and standing room only tickets left. The University has been re-seating its more than 6000 season ticket accounts in the newly constructed Amon G. Carter stadium over the last three months. Not all season ticket holders from 2011 will receive reserve seats in the new stadium due to the earlier than expected sell out. 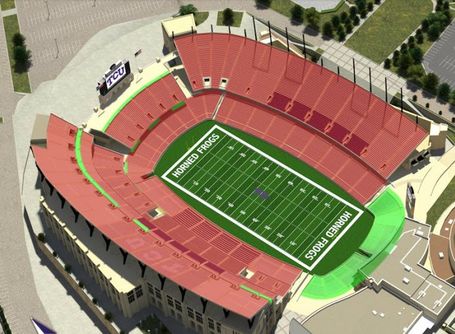 As of 2:00pm CST Monday, roughly 2000 general admission tickets remain in the south end zone of the stadium. After these are sold, the university is expected to release standing room only tickets to thsoe currently on the "waiting list" for season tickets. It is likely TCU will sell every ticket for its 2012 Big 12 home slate before the stadium is finished this summer.

The new Amon G. Carter Stadium, a $160+ Million project, will seat roughly 40,000 fans with a total capacity expected to be around 43-45,000 when finished. Discussions about adding a second deck to the east side of the stadium are continuing but construction would not start until after the 2012 season at the earliest. The east side upper deck would add another 10,000 seats to the stadium.

Renovation of Amon G. Carter Stadium began after the 2010 football season and is expected to be completed in time for the Frogs first 2012 game vs. Grambling State on September 8th.