Welcome back to the Monday Morning Manager, where we have been on an extended vacation over the last few months. Fear not Frog fans, the MMM is back as strong as ever to cover what should be a fun and busy summer for TCU Baseball. News on draft signings, former Frogs in the bigs and more is included below, enjoy!

- For TCU fans, the focus has been on the draft since the end of the season. Josh Elander, Kaleb Merck and Kevin Allen all signed pro contracts and have started their professional careers. You should see their information updated and included below. TCU also saw two of their 2012 commits get drafted and sign, Austin Aune and Jake Thompson. Aune accepted over $1 million from the Yankees while Thompson took a little more than $500k from the Tigers.

Now, the question becomes, who else will TCU lose? Kyle Von Tungeln has not yet signed with the Rockies, who could potentially go as high as $300k to retain Kyle's services. I expect this will go all the way to the signing deadline to push the Rockies up to where they should be to obtain Kyle's services, and I then expect him to sign. We shall see where things go.

Tyler Duffie and Jason Coats have also not signed, but for different reasons. Duffie has reportedly told the Brewers that he intends to return to TCU for his junior year where he hopes to become a more utilized asset for Jim Schlossnagle. Jason Coats is still recovering from a late season ACL tear, the White Sox will continue to evaluate his recovery before making a decision.

Of the 2012 commits that were drafted but have not signed, only two remain potentially open to doing so. IF Kody Eaves and RHP Tejay Antone, who were drafted by the Angles and Mets respectively, could see bigger offers towards the deadline that they might entertain. Eaves and Antone were regarded as possible signs before the draft, but it is probably less than a 50/50 proposition that they sign a pro contract. Sign or no sign, this class is going to be huge for TCU in 2013. (Eaves signed a pro contract with the Angels and will not be attending TCU)

- Four prominent TCU Baseball alumni are continuing solid years in the bigs in 2012, including one potential All-Star in the making. Updates on these and other alums follows (links to 2012 stats at bottom of post):

Andrew Cashner- Cash has had a successful 2012 campaign in a couple of different roles. Cash pitched 27 games in relief for the Padres, but due to injuries/depth concerns they sent him down to AA to stretch out and once again become a starter. So far so good for Cash, who threw six innings of 10 strike out ball last night in his lasted tune up, throwing 96 pitches. One more solid start for Cash and he will likely join the Padres again, this time in the rotation. Good for Cash, who made it clear he wanted another chance to start and is looking good so far in his pursuit.

Jake Arrieta- It has been an up and down 2012 for Jake, who has been dealing with "threats" from the Orioles management that he might move to the bullpen if he doesn't start pitching more consistently. There is no doubt Jake has the stuff to be a top of the line MLB starter, he just has to be a bit more consistent in his approach. The Orioles seem to have slowed down the bullpen push for now after Jake put together some solid outings. We shall see how things go over the next couple of weeks, let's hope Jake gets on a run and puts the whispers to bed.

Matt Carpenter- Matt went on the DL towards the end of May and just came back last Friday. He is continuing to hit though, collecting at least one hit each day over the weekend. Matt's future is still unknown as the Cardinals already have a UIF they like in Allen Craig (just went on the DL himself), but they also don't seem to be shopping him around just yet so he is a Cardinal for now. But, guys who can hit and play 3-4 positions are rare and I can think of at least one team who could use a bench bat who also plays third (Rangers) so I think the chances of him getting traded this July aren't bad. Whatever happens, Matt will likely be on a playoff team this fall and should get to enjoy some October baseball in this his first full major league season.

Scott Atchison- Scott is finally getting the shot in the bigs he has long deserved and he is making the most of his big year. A 1.36 ERA through 31 appearances in 2012 is good enough for All-Star consideration, and with players/Manager Ron Washington selecting the pitching staff for the AL team in 2012 I think Scott has as good a shot as anybody. IF Scott decides to hang up his cleats after 2012 (or maybe finish out one more year as a Ranger?), he certainly is going out in style, man this is fun to watch.

Sam Demel- Sam is struggling in AAA this year, and even though Arizona's bullpen is less that settled so far in 2012 it doesn't appear that Sam is near the top of the list for callups. Sam has just been a bit to hittable so far this year, I hope he can put together a solid two months and finish the year with the big league team. If he can show he is back to form, he might have a shot at a bullpen spot in 2013.

Bryan Holaday- Bryan just finished a two week stint with the Tigers, replacing an injured Alex Avila. Bryan hasn't exactly ripped the laces off the ball in 2012, but the Tigers love the same things we do: Great arm, great hustle, great attitude and they rewarded that with the callup. Bryan is back in AAA but it might not be for long, the impression he made on Manager Jim Leyland in his time up was quite positive.

Matt Curry- Matt has been exactly what the Pirates wanted in 2012, steady. He was out recently for a couple of weeks with an injury but is back now and looking good. The power numbers are down a bit (3 HR) but he is getting on base and driving in runs and that is what matters. A solid 2012 will go a long way for Matt as he proves he can handle the jump from A - AA.

Taylor Featherston- The average is up for Taylor who is performing well for the Rockies, albeit at the high A level. I wouldn't be surprised to see the Rockies challenge T-Bird soon with a promotion, it will be interesting to see how he adjusts.

Jimmie Pharr- Jimmie was in extended spring training for the Brewers to start the year, but was let go and is currently a free agent. No word on what his plans are going forward.

Kyle Winkler- Kyle made his professional debut at the end of May with the Rawhide, he has been pitching as a reliever so far in 2012. The results aren't there yet for Kyle, but after the 2011 injury and recovery you can't expect too much right away, once he gets his control and mechanics back I am sure he will be back to his old self.

Matt Purke- Matt made his pro debut on May 30th with much fanfare and expectations from Nationals fans. After three controlled starts (none of them were particularly good) Matt is back on the DL with more shoulder issues. Nats fans and beat writers have acknowledged the setback and the term "worst draft pick" is starting to come out. Ultimately, for Matt's sake, I hope they can figure out a solution to his arm troubles and get him back to 100%. If not, he always has 2010 to look back at, a season where he helped TCU get to a place they had never been before and hope to get back to very soon. 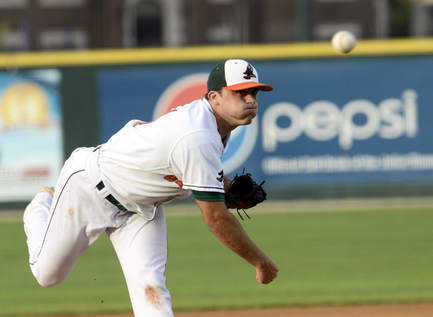 - Maxwell is off to a great start with the Joliet Slammers of the Independent League, sporting a 4-2 record, a 2.72 ERA and a beautiful 38/12 SO/BB ratio. It is good to see Maxy get back out there, he was easily my favorite of the weekend starters during TCU's dominant run through 2010-2011. Hopefully an MLB team catches a start soon and gives him the shot to move over into the big boy league. I am sure Joliet, Illinois is nice but hey, I think Maxy has earned better... Like, say, Toledo!

- Pitcher Brad Furnish was cut by the White Sox at the end of May, no word on the next steps for Brad. Same for Relly Mercurio, who was cut by the Indy League San Angelo Colts.

- Most of the TCU Baseball team is staying home this summer and working out in Fort Worth as part of a strength program, but a few are playing in summer baseball leagues. Your TCU 2012 Summer Baseball participation is included below.