Share All sharing options for: Playoff Coming to College Football 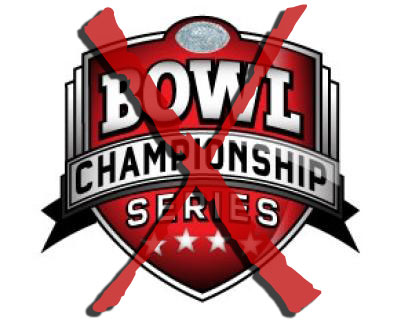 As I was talking to people this morning, I said tonight we will either be talking good, or cursing the presidential oversight committee once their final vote on a college football playoff was revealed. We can talk good about them because a four team playoff is coming to college football.

A four-team playoff for college football has been formally approved by a presidential oversight committee, a dramatic change for the sport that will begin in 2014 and continue through the 2025 season. The four teams will be chosen by a selection committee, the semifinals will be held at current bowl sites and the national championship game will be awarded to the highest bidder.

The presidential oversight committee also endorsed a rotation of the semifinal games among six bowl sites and a rotation of the championship game among neutral sites. The good news for TCU is that the "Champions Bowl" that partners the Big 12 and SEC is one of the "contract bowls." The other two are the Rose Bowl and likely the Orange Bowl. The three other bowls are being called "access bowls," and those have yet to be determined.

Here is something that is interesting though. This decision could eliminate the Big East from postseason play because its champion is no longer guaranteed a spot in one of the six major bowls. The Mountain West Conference also did not receive a waiver to automatically qualify. What does Boise State do now? They are in a lose-lose situation and have to make a decision by Saturday.

It’s a great day for college football fans. This system might not be perfect, it might not be the playoff system you want, but it is a step in the right direction. There will still be complaining from one of the teams who don’t make the final four, but at least games will be settled on the field. Once enough teams get screwed, they will expand the playoffs to more teams. We all see how the BCS unfolded. Once enough people started complaining, things finally got changed.

One of the biggest questions remaining for me is, who will be on the selection committee? I want a knowledge panel with as little bias as possible. Hopefully that is what we get. At least they got this part right.