Contemplating The Heisman: Part One, "Envy"

Share All sharing options for: Contemplating The Heisman: Part One, "Envy"

Coinciding with the launch of NCAA Football 13, EA Sports is asking SBNation blogs to share some thoughts on a number of different topics relating to the Heisman Trophy, the most coveted individual award in the game of football. The Heisman Trophy is a central focus of this year's game, with a new gaming mode you are definitely going to want to check out!

In the first part of this two part series, we will take a look at the former Heisman winner we most wish had played for TCU. For me, this is simple: The greatest athlete of all time, Bo Jackson. 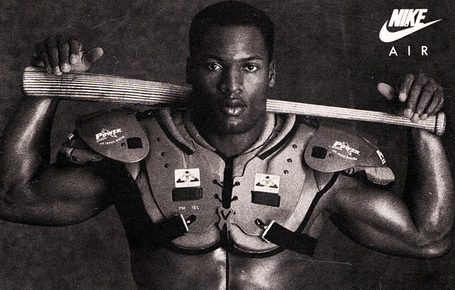 Certainly, Bo Jackson was a phenomenally gifted and talented running back. He was drafted by the New York Yankees coming out of high school but decided to attend Auburn on a football scholarship. This turned out to be a good decision, as Bo ran straight into the record books.

During his four year career at Auburn, Jackson ran for over 4500 yards with 28 touchdowns. In 1985, he totaled over 1700 yards for what was at the time the second best single season ever in SEC history. That same year, he hit over .400 with 17 home runs for the Bulldogs baseball team.

It is arguable that the 1985-1986 athletic season truly vaulted Jackson into the limelight of elite athletic prowess. He won a Heisman, dominated the baseball field, ran a 4.12 40 at the NFL combine and was subsequently drafted in both the NFL Draft (First Overall Pick, Tampa Bay) and the MLB Draft (Fourth Round, Royals). With a lucrative career in football on the horizon, Bo shocked many and decided to head to Kansas City and join the defending world champion Royals.

In his first full season with the Royals, Bo hit 22 home runs and knocked in 53 RBIs. He truly broke out in 1989, when he made the All Star team and was awarded the game MVP. Through the end of the 1994 season, Bo continued to play baseball and is remembered for his impressive athletic feats and incredible raw power.

While baseball may have been his passion, Jackson's fame still lay with football. After not signing with the Buccaneers in 1986, Jackson was drafted by Al Davis and the Raiders in 1987 who allowed him to finish the baseball season before joining Los Angeles, all while still being paid a full running back salary. Jackson was offered this chance during each of his four professional NFL seasons.

Bo never produced much in terms of total yards or touchdowns for Al Davis, but he made up for it with stunning 90+ yard runs in three of his four professional seasons. While many in the NFL publicly mocked Davis for his willingness to pay Jackson for partial play and low level production, Davis always defended the decision by simply stating that, "Bo was a game changer and a star, that is exactly what I got."

The most prominent memory most have of Jackson's football career was his 1987 Monday Night Football game vs. Seattle where he rushed for over 200 yards, including a 91 yard scamper and a trucking of Seahawk linebacker Brian Bosworth who had publicly mocked Jackson leading up to the game.

Ultimately, Jackson was forced to retire due to a degenerative bone condition known as avascular necrosis which caused several severe injuries including two hip replacements. Jackson continued to play baseball up until the 1994 season when he retired during the players strike.

Ultimately, after close consideration, if I had to pick one Heisman winner to magically make a Horned Frog, it would be Bo. He didn't have the longest career, he didn't break every record or win countless numbers of championships. But, he was undoubtedly the best athlete of the 20th century, if not ever. To have that type of skill and natural ability is not God given, it is Herculean and must be respected for all its glory and amazement.

It is quite simple folks: Bo knows.

This post was sponsored by EA Sports NCAA Football 13. Check out the video for the game below.