Share All sharing options for: Video Rewind- What Went Right Against Grambling State? (SPOILER ALERT: EVERYTHING)

Welcome to the first of what will hopefully be the first of many TCU video rewinds. Generally they'll be published on Wednesday, and will involve me looking over the game tape and highlighting (with pictures, and possibly clips in the future) what went right and what went wrong for either TCU or next week's TCU opponent. Hopefully it will give us all a better understanding of what TCU is doing right, what TCU is doing wrong and what TCU will need to do to win next week's game. For this first week since I was unable to get tape on Kansas' loss to Rice we'll be reviewing the first half of TCU's win over Grambling State (since the starters only got one half of work). Make the jump if you will, and let's learn.

Ideally as a returner you want to keep the ball in front of you so you can see how your coverage is setting up in front of you and immediately start moving for positive yards. Grambling State's Punter gets decent hangtime on his kick with the ball remaining in the air about four seconds and gets more distance than Gray was expecting, forcing him to turn around(!) and field the ball over his shoulder which is a definite no-no. 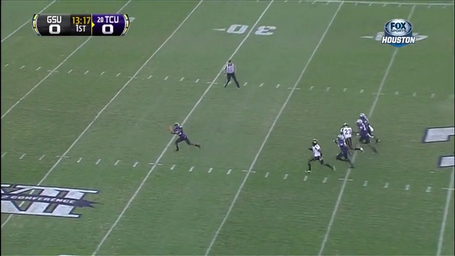 Gray is blind to his coverage, how the defenders are placed and is moving in the wrong direction... and it still turns out magical. He gets his head around and decisively turns to around over his left shoulder, which is happily the correct side. As you can see, the Grambling player is already starting to fall because of the quickness of Gray's cut. 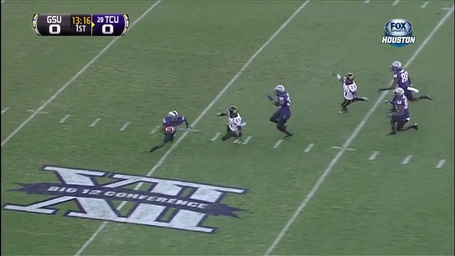 Gray's head is around and it looks like the return will be a short one, but Gray breaks a tackle and sees that he's drawn the Grambling coverage over too far and there's a lot of open space on the other side of the field, if he can get there. This sets up a footrace that Gray will regularly win as with just one cut eight Grambling players are behind him and out of position to make the play. 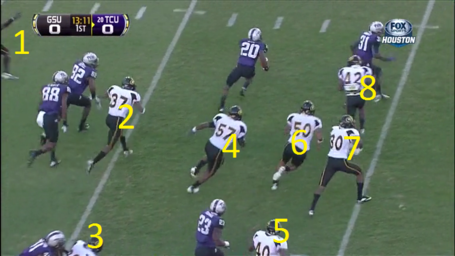 Even better though, TCU has numbers on the remaining Grambling players, so it becomes an easy stroll for Gray into the end zone. 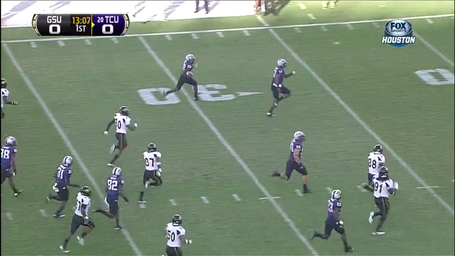 Grambling lines up in the shotgun with three receivers to the right, one to the left and one running back, while TCU lines up in its usual 4-2-5.

TCU rushes only four and plays zone behind, here you can see #17 drop into the flat towards us. Grambling's three receivers on the right are breaking into their routes but Grambling's quarterback Williams is already in trouble, he sees Fields (highlighted) has beaten his man and is coming right at him so he has to throw the ball now. 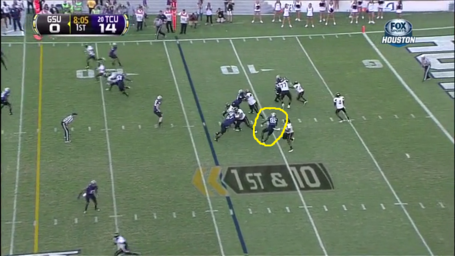 You can see he's on his back foot which means this ball is going to float, he can't take the necessary step forward because in that time Fields will level him. Before the ball has even left his hands this is looking like disaster for Grambling. 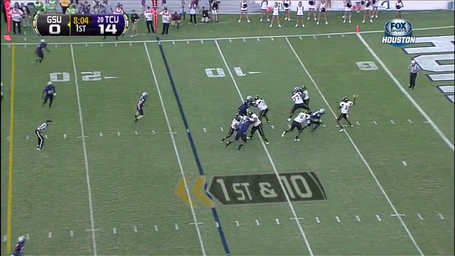 As a result of the pressure in his face he doesn't properly see that Elijah Olabode is reading his eyes the entire way, sitting in zone and ready to break for the ball when it comes out. And he does

As a result he's in position to catch or bat down the pass before Williams' intended receiver can even get his head around to look for the ball. 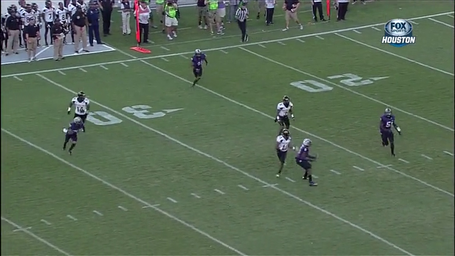 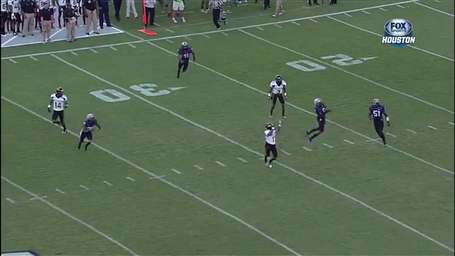 And it looks like he was who Williams was throwing it to all along, before having an easy rumble into the end zone for a touchdown. At this point TCU has 21 points and the offense has only touched the ball once. The game is pretty well over.

Key Play #3: Waymon James turns nothing into something

Some fans of other teams I've talked to seem confused that I (and the rest of the FoW crew) are so excited when talking about Waymon James, and don't really have the same level of enthusiasm for Matthew Tucker (or Ed Wesley last year)'s carries. It's not that Tucker and Wesley aren't good backs, Tucker is on the Doak Walker watch list this season for good reason. The difference, however, is that James might actually win the thing if he gets enough carries. This play is a good example of what makes James a superhero. Here's the lineup, James is the sole back. 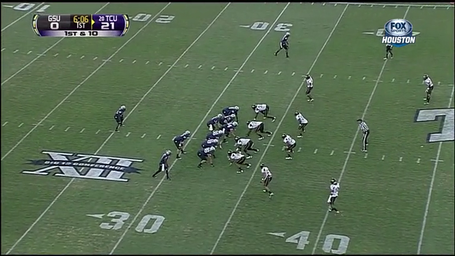 The frogs are in an ace set, and it's a pretty straightforward dive right, but the Grambling D-line is clogging the middle and the linebackers are flying forward to cleanup, James can power straight ahead and get perhaps five or six yards, but he sees #54 take a bad angle on his right. 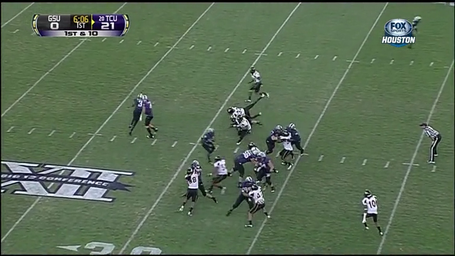 James stuttersteps and 54 gets too far upfield, and there's now a clear hole- not the hole he was supposed to take, 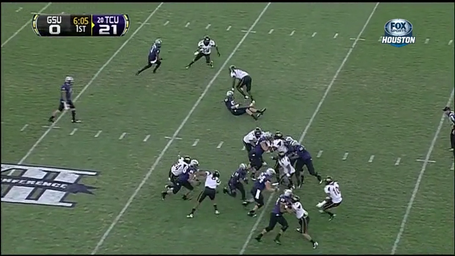 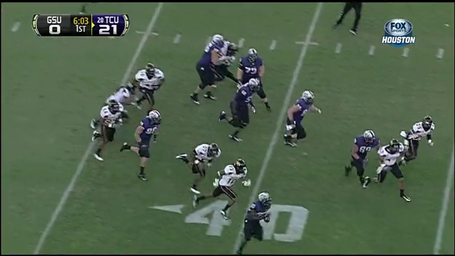 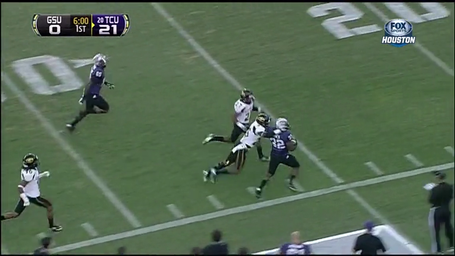 Which sets up the easy slant from Pachall to Brandon Carter on the next play for the touchdown to make it 28-0 and put the game out of reach. Tucker takes the ball up the middle and gets five or six. James has the instinct, the vision and the power to change a game- that's why we love him.

And that's it for the Video rewind of the week. Future weeks will likely have more analysis, as the upcoming games will not be as one-sided as the Grambling game was so we'll have both good sides and bad sides to focus on. TCU certainly didn't play a perfect game in this one, but they were so much better than Grambling that they were easily able to recover in time to make a play if they blew an assignment. I hope you guys enjoyed it, and look forward to more next week.