Share All sharing options for: Frogs O' War Opponent Rewind- What went right and wrong for Virginia against Georgia Tech

I was able to acquire game tape for the Georgia Tech/Virginia game so I decided I'd throw up a bonus post today to show what Virginia was able to do well (and didn't do so well) against Georgia Tech so you can have a good idea of what Virginia is trying to do on offense and defense when we play. Sadly, Georgia Tech's offense isn't something that you can usually make comparisons with- other than to say "If we manage to run for 461 yards we should win". TCU doesn't run that sort of offense, but how Virginia responds to playfakes and regular option plays- which are both staples of the TCU offense- could be mildly illustrative. Let's learn.

What went wrong for Virginia #1: Tevin Washington pass to Zach Laskey for Touchdown

Annoyingly there's not a clear formation shot before snap as the network was showing highlights from other games right until the ball was snapped, still you can see the formation all right- Georgia Tech is lined up in its customary wreckbone, with a back motioning to the right. A tight end off the line, two wide receivers. Virginia lines up in a 4-3 with the third linebacker off a bit to cover the tight end. 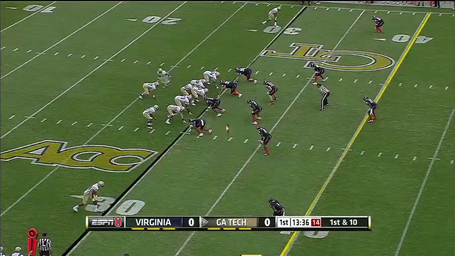 Immediately after the snap the option look starts, the back motions out to receive the pitch if necessary and the QB looks like he's about to turn and run down the line- older TCU fans will remember this is a sure sign that the option is coming, I can still see Casey Printers making the turn in my minds eye. Virginia's defense sees it as the option coming as well, and immediately starts to react. The bottom corner is clearly wanting to react to the pitch, the rop corner is about to start his backpedal though- the option is to the other side, so if he's the one who makes the tackle it will be because he was downfield and had the angle. The safeties are both starting towards the line. This is what a team that has prepped for the option all week can do- they're prepared and they react because they think they see the bread and butter coming, when in reality- they're about to be toast. 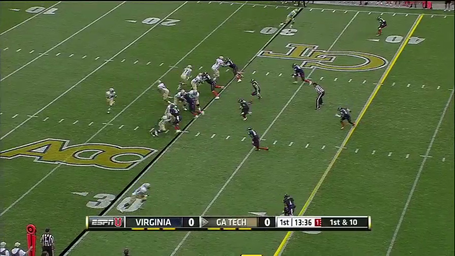 The turn isn't coming, the Virginia players bail out of their pursuit, and drop into coverage, but that first step has left the corners on islands. Zach Laskey, the back who was lined up behind the QB, drops into the flat far in front of his coverage as the Virginia defense tries to recover and switch into pass mode. 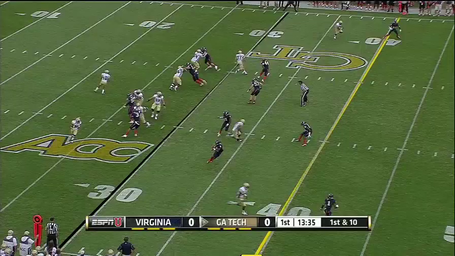 The pressure is nowhere to be found as Tech QB Tevin Washington uncorks downfield as Zach Laskey turns upfield, leaving the linebacker who was meant to cover him behind. 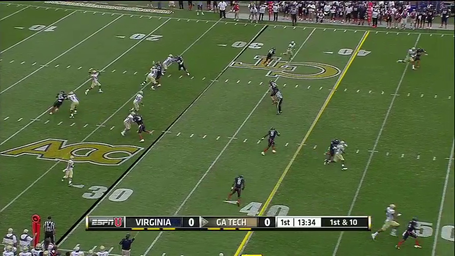 And because of the step in the wrong direction the Cavalier safeties don't have the angle they need to stop a big pass from becoming a touchdown pass. Georgia Tech's receivers are experienced blockers from running the ball fifty times a game, so there's no chance the corner can get through his man to Laskey. 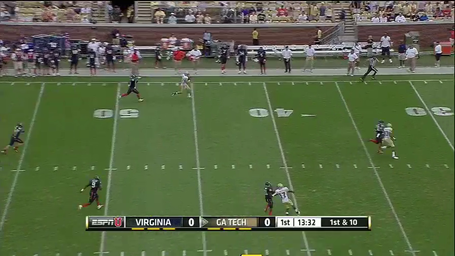 If TCU establishes the run early there will be plentiful opportunities to go play action, though probably not anything this jaw droppingly open. This was Georgia Tech's first offensive play, and the timing couldn't have been better for coach Paul Johnson.

What went right for Virginia #1: Michael Rocco to Jake McGee

Whomever is the quarterback for Virginia on Saturday, special attention is going to need to be paid to Cavalier Tight End Jake McGee. McGee is 6'5" and can catch, though he's not a huge guy for blocking purposes, so TCU's secondary is going to have to play an excellent game. On this play Virginia lines up in the shotgun, McGee motions to the left and has one receiver left two to the right. Tech is in a 3-4 and will send four at the snap. 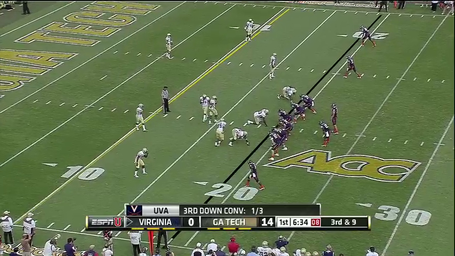 McGee gets a free release and Tech sends one of the inside linebackers after him for some reason (the outside man is just standing there staring at the QB) and as a result he's frighteningly open as his route takes him toward the sideline. 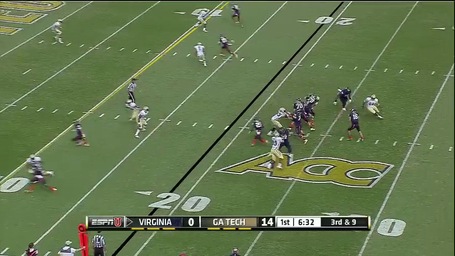 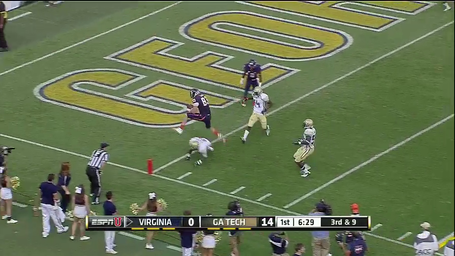 What can we learn from this? . . . Don't try to hit McGee low. Also covering him would probably help.

What went wrong for Virginia #2: Rocco might be a bad quarterback.

Rocco threw two picks in this game, and almost threw another on his first attempt of the game, but for all that the most baffling throw he made in my mind is this one on third and eight. Virginia lines up in the gun with a running back on each side, twins to the right and a single receiver to the right. Tech is in a 3-4 but with one OLB lined up over a receiver. Tech will rush four at the snap. 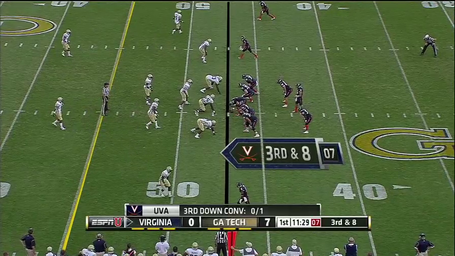 The key as to why this throw is so bad is that Rocco's protection is... pretty excellent. Five seconds is a long time during any one play, and that's how long Rocco holds the ball before he throws it. That's generally enough time for a quarterback to go through his entire progression, and so Rocco does. His first read is the outer right receiver, then the middle, then to the left where he can see his RB is sitting for a gain- but will need to make at least one man miss to get the first down. Instead he sees that the receiver on the inside has broken all the way across. He decides "Yes, this is the play!" and makes the throw. 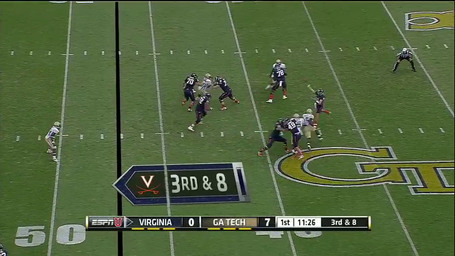 And hits a tech player right in the hands, missing his target by at least five yards. Now, passes that are almost picked off happen in college football, even to the best of QBs. The difference (and concern) with Rocco is that this was not a hurried throw. He had five seconds, which is a very long time in the quarterbacking world, and he missed- badly. 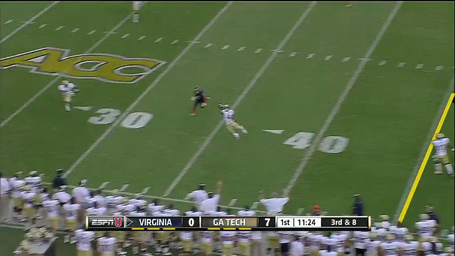 This is the main reason why I'm not afraid of Rocco dropping back to throw on Saturday. When you have that much time, you can't afford to make such a bad throw.

What went right for Virginia on defense: Not very much. They had a bad time staying disciplined on the triple option but that's not something that TCU will exploit too much since the triple option left about when Franchione did. So instead I'll just diagram the first Sims touchdown play, since the second was buried so deep in garbage time it's doubtful anyone other than Georgia Tech's DC (and former Virginia head coach Al Groh) cared about stopping Virginia anymore.

So we'll leave it at that. Not as thorough as usual, but I was not expecting the game to be as one sided as the score indicated- and I was wrong. We'll definitely be getting Virginia's best shot on Saturday, but if the Frogs play like we know they can play they should win this game- if they play like they played against Kansas it could be another nail-biter of an afternoon. We'll cover it with a game thread so you can comment live and have postgame analysis immediately afterward, so keep checking in to Frogs O' War.