HawkeyedFrog: What can you take out of a game like this? TCU was not challenged in any phase of the game, as a combination of excellent TCU play and mediocre Grambling competition made this one a laugher from the start, so what to expect from the frogs for the rest of the season is not clear from this game. That doesn't mean that there's not anything to be taken from this victory however, as Casey Pachall showed great poise, a fearless attitude and pinpoint accuracy in going nine for nine for 201 yards and two touchdowns in his half of play- that's a 397.6 passer rating and 22.6 Yards per attempt, for those of you keeping track. What you can take from that is that even though the drug issue still hangs over Caseys head according to the national media, it is not affecting our quarterback in the slightest so far.

Another thing you can take home with you is that after a lackluster (by frog standards anyway) season for the returners, TCU has a big play threat on returns once again- Deante' Gray picked up the most punt return yards in school history, breaking a sixty year old record, checking in with a touchdown on his first touch (on a catch where he turned around and caught it over his shoulder- which caused swearing in the Hawkeyed household until it turned into something amazing). Skye Dawson may only have missed a game, but he definitely lost his punt return duties after this great performance by Gray, so that's something to feel good about.

The kicking game is generally independent of opponent, so we can take that Patterson will probably do a serviceable job punting this year- he only had two punts, but they were all right, minus a big backward bounce on one that removed a large amount of distance. Additionally, we were eight for eight on extra points, which may mean that the era of TCU fans having to hold their breath every time we attempt an extra point is over at last, though no field goals mean that the Oberkrom era still has a few question marks about it.

Other than that? Boykin looked fast and accurate (but not near good enough to unseat Casey this year, sorry Wimple), the defense looked dominant (which is what you'd expect given this level of competition, but still nice to see), the Pachall-to-Boyce connection could be even more devastating this year and Waymon James still isn't getting enough carries for my liking. If he doesn't get fifteen-plus against Kansas I will risk becoming miffed, especially after Rice(!) shredded the Jayhawks on the ground.

All in all it was a dominant win, and it being Gary Patterson's 110th is what will have TCU fans feeling good this week, but the season really starts next week as TCU hits the road to Lawrence and tries to hand Kansas its second loss to a small Texan private school in as many weeks.

The other authors will be editing in their thoughts, analysis and videos as they come home, so watch this space over the next 24 hours! 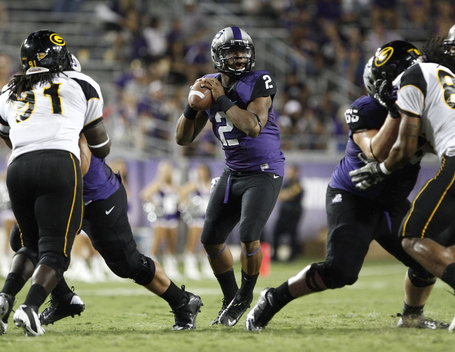 Purple Wimple: Two words-- and neither will surprise our loyal followers-- Trey Boykin.

Wow-- that's what I've been raving about all off-season. Man, is he fast. Dalton was crafty when running; Pachall is better throwing than running; Boykin is a true dual threat. Mark it down, there's going to a battle royale at QB when the redshirt comes off Tyler Matthews, because my man with the number two on his jersey is the real deal.

Also impressive: Deante' Gray. That initial return for a touchdown was a thing of beauty. The cut-back through the crowd to break open and make the final rush for the endzone reminded me of Jeremy Kerley. And muffs? Fumbles? Heart-stopping encounters with punted and kicked footballs? None. (None for the Horned Frogs, that is. Grambling State muffed every single kickoff, I think. That's a problem, kids.)

And, finally: kudos to CGP for taking the wins crown for TCU head coaches. The pants-hiker has been breathing rarified air for awhile now, so this isn't a new sentiment. Keep it up, coach, and you'll be first on some more lists, too.

FungoFrog: The way I look at it, I am glad this game is out of the way. The stadium is open, the youngsters played and played well, TCU got the win and GP is now the winningest head coach ever at TCU.

And we should probably just forget about it all together.

It is arguable that TCU would have been better served playing against itself tonight, you would have had better growth opportunities for all our young talent.

The guy I came away really impressed with is BJ Catalon... That guy has great speed, good burst and runs downhill, something speed guys sometimes shy away from (Ed Wesley). I saw some bad too at times and we will have to take a look at that over the next couple of days.

BTW, we need to put out an APB for L. Brown... The great, explosive talent hardly got a look... Disappointing.