I have some links on what is, for me, a sad yet joyous day.

Here are your morning links!

Really, there is only this... Josh Outlaw had a very good visit this weekend, according to HFB.com, and he has TCU #1 ahead of his final visit to Texas Tech. We should know something about Outlaw shortly into the month of Febuary.

And, beyond the links, today I have a personal note. Early this morning, my grandfather Bert Sharp passed away in Austin, Texas. It was not totally unexpected, he has had a myriad of health problems over the years, especially recently. He was a fighter, and a TCU fan, and that is the story I wanted to tell today.

Bert grew up in Dallas, just a few minutes walk from the old Cotton Bowl Stadium where he and his friends used to hop the fence, grab a ball, and start a pick up game right there as if they were the true Titans in the game of football. He always remembers impersonating TCU greats Davey O'Brien and Sammy Baugh, although he was never a quarterback, mostly a punter... Growing up in Dallas at that time, most were not well off, so putting meat on your bones wasn't as easy as it is today. Even after dementia and Alzheimers set in, I would always ask him who his favorite TCU players were... Baugh, O'Brien, and on a good day, Lilly. The man knew his stuff.

He is a decorated veteran, PhD history professor who taught at Michigan State University, Indiana University and later several high schools throughout the Corpus Christi area, where he retired.

Bert was my final surviving paternal grandparent, a true fighter. He is survived by his three daughters, and nine grandchildren. He will be missed. 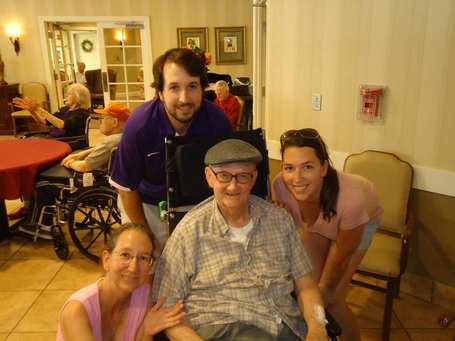