The FOW staff is down this week, not feeling good about the Frog's future coming off a horrendous performance in Stillwater.

THE GOOD
The team sustained no season ending injuries this week.

THE BAD
Everything else about the game.

THE PESSIMIST
This was honestly the most disheartening performance I've seen from a TCU team under Gary Patterson. There have been frustrating games- the pass happy offense in the Fiesta Bowl. There have been deflating games- the loss to SMU after upsetting Oklahoma in 2005. There have been games where my heart was ripped out- 2011 Baylor, 2003 Southern Miss. There has even been a game where I questioned if Patterson was the right coach to get us over the hump- 2004 Texas Tech.

This loss isn't as bad as losing to a rival, like Tech, Baylor or SMU in the grand scheme of things of course. It wasn't a blowout that made the program lose face, but it conjured up a feeling that brought me back to the old SWC days and a particular memory I had of a season ending loss to Texas A&M back in 1993 when I was only 9. That was the last time I felt like nothing TCU was doing worked and resigned myself to the fact that we were going to lose. You see, I'm irrationally optimistic when it comes to TCU football.

I can watch games, look at tape, analyze offense and defense fairly objectively, but push comes to shove I'm the type of fan that has always believed TCU has a chance in every game they play. There have been times when this belief has been comically wrong (that 4-6 TCU team was not going to beat a 9-1 SWC champion A&M team) and times when I've looked like a visionary (2005 Oklahoma, 2011 Boise State), but I almost always convince myself that TCU can cover up their warts and pull out a victory somehow. That optimism is over now. It may well revive at some point, but right now the offense is performing at such a level that I can't feel confident that TCU will win another game this season.

Does TCU have the talent on offense to win games? You're damn right they do. Waymon James and B.J. Catalon are both good backs, and despite his lackluster decision making Trevone Boykin has the legs to open up running lanes and soften passing coverage if he's put in a position to use them. How is it that with a one-legged Matthew Tucker, a Freshman B.J. Catalon and a perpetually dog-housed Aundre Dean TCU ran its backs 34 times in some games last year, but with a bulldozing Waymon James and significantly tougher B.J. Catalon backed by an explosive but raw Aaron Green we instead see 18 rushes? How is it that when we finally have the running backs to effectively run the offense we stuck with last year to our detriment that we now feel Trevone Boykin should be throwing the ball 30+ times a game?

I cannot make rational sense out of this, and it not only frustrates me to no end, it completely drains my optimism and excitement for the games to come. Now going up against a Texas team that has repeatedly shown it can be run on by both backs and running quarterbacks, I have no belief at all that the Frogs will come out of the gate trying to establish that running game. I'm a pessimist. And that's what hurts the worst. 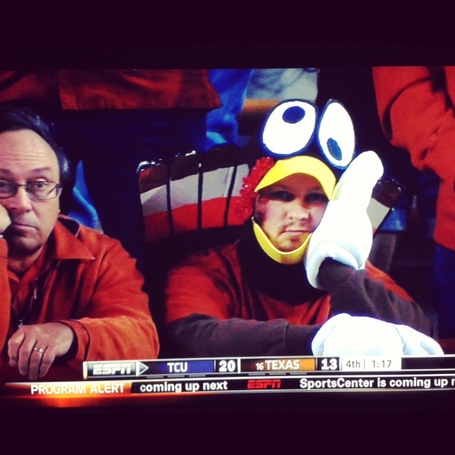