All ten teams in action this week, and still much less chaos than the last few weeks. Still left with uncomfortable questions about where to put TCU and WVU though.

An interesting week that served to muddy up the waters at the bottom to go along with the lack of clarity at the top.  What do you do with a team like Texas, who "beat" Iowa State by one, or West Virginia who got toyed with by Baylor, but still own a win over Oklahoma State?  All questions are answered again, but perhaps not satisfactorily.

1.) Oklahoma Sooners
The Sooners stay on top, despite looking exceedingly vulnerable against TCU at times.  The Oklahoma ground game is legitimate, and Blake Bell's interception-less streak continues, but the real story was OU's defense complete shut down of the TCU offense in the first half.  OU has the talent on both sides of the ball to win the Big 12 and had played the best opposition of all the undefeated teams, earning them a tighter hold on #1.
Previous ranking: #1, Season high ranking: #1

2.) Texas Tech Red Raiders
If you need any indication for how much better Texas Tech is this year than last year, compare the games against Kansas.  Last year the Jayhawks took the Raiders to a pair of overtimes in Lubbock, while this year, despite putting the pressure on Tech early, the Jayhawks were easily swept aside once the Raiders found their stride.  Tech remains at #2, and will likely remain there until late October when the chance to seize #1 will come in Norman.
Previous ranking: #2, Season high ranking: #1

3.) Baylor Bears
The Bears make it difficult to keep them out of the top two spots every week, but through no fault of the players on the field, the Bears haven't played anyone worth a damn.  Yes, they trounced a West Virginia team at home that upended Oklahoma State last week, but the Maryland team that dominated West Virginia the week before got shelled against Florida State to raise further questions about both the Mountaineers and the Terrapins.  I don't doubt Baylor's prowess, but until they hit the meat of the schedule or Oklahoma/Tech loses it's going to be tough to justify moving them up.
Previous ranking: #3, Season high ranking: #3

4.) TCU Horned Frogs
Congratulations, TCU!  This is the last week of the season where losing a game does not result in a tumble down the polls.  The Frogs gave both of the top two of the power poll all that they could handle on the road, which is still somehow more impressive than what the rest of the Big 12 is putting together.  Still, the time has now come to win some games, or the Frogs will quickly find themselves looking up at the majority of the conference.
Previous ranking: #4, Season high ranking: #1

5.) Oklahoma State Cowboys
The Cowboys offense disappeared for a sizable chunk of the game, much like the team above them in the rankings.  Unlike the team above them the struggles came against Kansas State, a team that's been run on successfully by the uninspiring Texas Longhorns.  Still, they won the game legitimately so they move up and I can feel good about it, unlike the next team on the list.
Previous ranking: #6, Season high ranking: #1

6.) Texas Longhorns
I don't know what to do with you, Texas.  On the one hand, the win-loss record says that you're still undefeated in the Big 12.  On the other hand... I did actually watch the game against Iowa State, and there's a whole lot to not like about how that game ended or how Texas played.  I hope that the "win" against Iowa State feels good guys, because I think the Red River Shootout is going to get very ugly very quickly.
Previous ranking: #7, Season high ranking: #2

7.) West Virginia Mountaineers
I know the score doesn't look too embarrassing, but the score doesn't say it all, as West Virginia scored a large portion of their points by picking off Baylor's second string quarterback and marching on the second string defense.  This was brutality you don't often see outside of the ninth episode in Game of Thrones seasons, and the fact that fellow mountaineer manglers the Maryland Terrapins got shellacked raises further doubts about the gold and blue.
Previous ranking: #5, Season high ranking: #5

8.) Kansas State Wildcats
Playing on the road in Stillwater is tough, but the Wildcats appeared to have the game won at several places before letting the Cowboys escape.  It's got to be frustrating for the Wildcats to come up short, but they may have found their next quarterback as Daniel Sams replaced the ineffective Jake Waters.  Sams is a sophomore who does make mistakes with the ball (including some that dearly cost KSU in this one) but he's also an effective distributor and runner, so the Wildcats could become much more dangerous as the season goes on.
Previous ranking: #8, Season high ranking: #7

9.) Iowa State Cyclones
I had to do something from the Cyclones, who probably (and rightly) feel that they had a game stolen from them.  That could be the game that keeps the Cyclones from prolonging their bowl streak, which makes the pain all the worse.  At least they've finally moved out of the bottom of the power rankings with a very effective performance against the Longhorns.
Previous ranking: #10, Season high ranking: #7 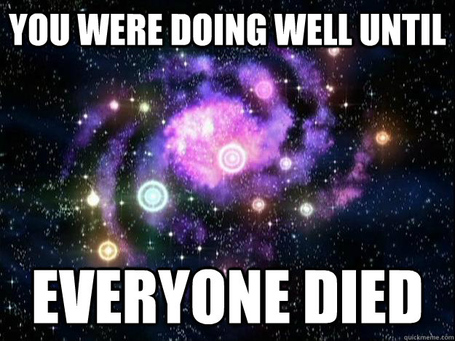