Intrigue, upsets, beatdowns and escapes in this week's Big 12 schedule- We recap it all while updating the staff picks.

In a season of despair for TCU it's nice to see that good things can happen (for other people at least).  The Kansas Jayhawks picked up their first conference win since 2010 (back when Miley Cyrus' questionable decisions were limited to "Should we make a Hannah Montana movie?") and they did it in dominant style, with West Virginia tacking on 12 of its 19 points with less than five minutes to play.  Before that Kansas dominated the game with a gameplan focused on the running ability of James Sims (22 caries, 211 yards, 3 TDs) supplemented by the running abilities of Montell Cozart (13 carries, 60 yards) and blog favorite Brandon Bourbon (12 carries, 48 yards) while asking their decidedly-not-Jake-Heaps backup quarterback not to lose the game for them.  As the Kansas goalposts will attest, mission accomplished. 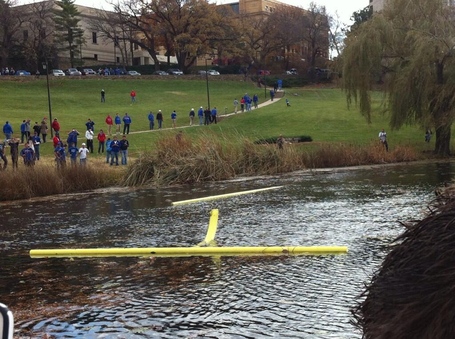 (The refs at Texas Tech aside, the home loss to West Virginia is the one that will rankle me most this offseason)
Next week: Kansas- @ Iowa State, West Virginia- Bye
Staff picks: Everyone picked West Virginia, but Jamie had it being a close game.

Once a year under Paul Rhoads Iowa State goes out and wins a game that they have absolutely no business being in.  First there was Texas in the hilarious "We Must Protect the DKR House" game, then there was Oklahoma State in the "We hope you enjoy SEC rematches!" game (Seriously still bitter at ISU for that one), and of course last year was the "Casey Pachall makes bad decisions with everything but the ball" week where ISU upset the Frogs who had been using Trevone Boykin to shore up running back depth to that point.  After a scoreless first quarter and twice taking a seven point lead in the second quarter it looked like the roulette wheel of Cyclone football had landed on the Oklahoma Sooners.  Then OU returned a punt for a 90 yard touchdown just before the half to tie the game at 10-10 and the wind went out of Iowa State in a big way.  Oklahoma flipped back to the original winner of the quarterback competition Trevor Knight, which paid off in the short term (we'll see how he does when the schedule gets tough again) as Knight's quick running ability played havoc on the Cyclones to the tune of 123 yards, which added to 128 yards from Damien Williams and 86 yards from Brennan Clay to pulverize ISU in the second half.  The Cyclones did not flip back to the original winner of their quarterback competition, despite Grant Rohach getting pummeled for six sacks and Sam Richardson accounting for the Cyclones only touchdown of the game.  Sadly for ISU it's looking more and more like the game they had no business winning was the game they were screwed out of by the officials against UT, which leaves the Cyclones looking at three wins as the absolute best they can still achieve.  I think Paul Rhoads is an excellent coach, but the Cyclones had a quick trigger finger on a coach who had been highly successful (their all time wins leader, in fact) in Dan McCarney, who has gone on to turn the North Texas Mean Green into not just a bowl team but a likely conference champion in CUSA.  Watch out this offseason, Paul, you never can tell with ISU.
Next week: Oklahoma- @ Kansas State, Iowa State- Kansas
Staff Picks: Unanimous for OU, but Jamie had the biggest separation.

A handsome man said of this game, "Without Jonathan Gray to create a lot of third and short/third and medium plays the Longhorns will rely more on Case McCoy to try and win the game- to their detriment".  Lo and behold, McCoy threw three interceptions including a pick 6 that moved the game to the firmly out of reach category and the Longhorns struggled on the ground with Malcolm Brown averaging just 3 ypc on 25 attempts.  On the Oklahoma State side, Clint Chelf was incredibly efficient through the air, completing 73% of his passes for 9 yards an attempt while also adding almost 100 yards rushing on a 9.6 ypc average while the Oklahoma State defense did a solid job of bending and not breaking while waiting for McCoy to make a mistake.  Each team still has a shot at the Big 12 title if they beat Baylor but, with this performance and the game being in Stillwater, Oklahoma State has firmly stated that it is the most dangerous team out there for Baylor's BCS dreams.
Next week: Oklahoma State- Baylor, Texas- Bye
Staff Picks: Marshall and Hawk both picked OSU, but Hawk was the only one to see a multi-score margin

A handsome man had actually originally predicted that Tech would jump out to an early two score lead, but Baylor would come back to tie at halftime before escaping a dog fight late.  Sadly I got too cute and specific with it the more I thought on it, and instead predicted Tech to have a big lead at the half and ended up less than half right.  Tech did indeed jump out to a two score lead, and after Baylor got a big play to cut the lead in half, Tech went on a methodical drive to kick the margin back up to two scores (missing an extra point though).  A three and out by Baylor followed, only for Tech to stall due to a penalty and have to punt it back- which Baylor returned for a touchdown.  At this point the momentum was starting to turn, but Baylor's defense had spent almost the entire first quarter on the field which could pay serious dividends down the line if the Raiders could just keep the game close.  Then Baylor CB K.J. Morton, who was rushing Baker Mayfield, leapt into the air to deflect Baker's pass... and came down with it.  That was all she wrote, as Baylor kicked things into high gear and Tech visibly deflated with the "Here we go again" vibe that has been persisting throughout their losing streak.  Baker Mayfield had the kind of game that will renew the wailing of "Why didn't we offer him?", throwing for over 300 yards and 4 touchdowns with only the one interception (which was just a great athletic play by Morton rather than a bad decision) and even more impressively using his legs to evade pressure and pick up some key yardage and first downs.  If any of you invents a time machine, remember to go back and tell Patterson to offer that kid.  On the Baylor side... Baylor performed well, but man the solid gold helmets?  Not a good look.
Next week: Baylor- @ Oklahoma State, Texas Tech- Bye
Staff Picks: Everyone picked Baylor, Jamie picked Baylor's point total exactly, while Marshall got the margin almost perfect.

I think I said all I really wanted to say about this game already.  TCU had too many #2s.  Oh, I will say kudos to Jaden Oberkrom for that incredible 56 yarder though, best kick I've ever seen.
Next week: Kansas State- Oklahoma, TCU- Bye
Staff Picks: Everyone picked KSU (because why wouldn't you?) but Marshall was the only one who thought it would be close.  Kudos, Marshall.