Our experts were wrong quite a bit this week, and you know what? I'm okay with that.

Wow did I miss the boat on this one.  Though Iowa State is a much better team than their record indicates, I was reasonably certain that the mounting disappointments of the year along with the suspect play of sophomore QB Grant Rohach that Iowa State would roll over if they faced any adversity in this one.  In doing so, however, I totally forgot that Iowa State's coach is this man: 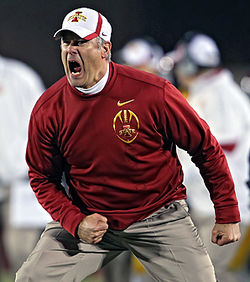 So suffice to say the Cyclones did not roll over for the Jayhawks but simply rolled over the Jayhawks using the same Grant Rohach that they've struggled so poorly with.  ISU rolled up a massive 502 total yards, with Rohach accounting for 300 passing yards on the backs of numerous big plays, including five passes of 30+ yards while Kansas went away from the highly productive ground game of last week to put the ball in the hands of its quarterbacks for 31 attempts- while Jake Heaps and Montell Cozart combined to complete less than 40% of those attempts.  The turnover total was the same, the rushing averages were similar (4.6 ypc to 4.7 ypc) so just about the entirety of the game's result can be put on the effectiveness of the quarterbacks and their yards per attempt average- ISU averaged 15 YPA, KU averaged .  Unless you're Georgia Southern playing at Florida you aren't going to win like that.
Staff Picks: The new guys both picked ISU over the Jayhawks by two scores, while Jamie and Hawk (Man, those names together is close to Jayhawk) thought KU was due  Oops.
Next week: Kansas- Kansas State, Iowa State- @ West Virginia

The Sooners were without starting running back Damien Williams and had subbed Trevor Knight back in at quarterback for the surprisingly ineffective Blake Bell, and somehow it made all the difference in the world.  On the road in Manhattan the Sooners ran over the Wildcats in a big way as Brennan Clay racked up a beastly 200 yards on the ground on 31 carries to go along with another 82 from Knight.  On the K-State side the Wildcats were bottled up on the ground, averaging barely over 1 ypc while sticking with Jake Waters at the QB almost exclusively as Daniel Sams didn't attempt a single pass and had only three rushing attempts.  The turning point of the game was a pick six in the fourth quarter at the Oklahoma 27 yard line that gave the Sooners a 17 point lead in the fourth quarter that didn't let the Wildcats play their run heavy game.
Staff Picks: spfleming was correct in Oklahoma winning, but incorrect that the Sooners were playing at home.  I assume he'll take that tradeoff.
Next week: Oklahoma- Bye, Kansas State- @ Kansas 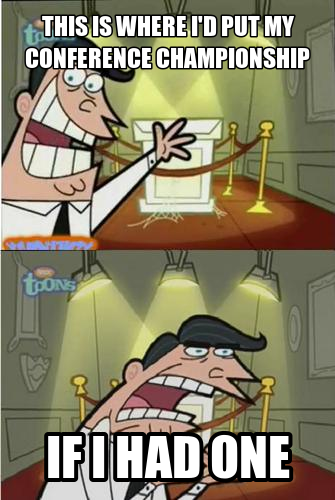 Staff Picks: HawkeyedFrog got OSU's points almost perfect (predicted 48) and spfleming predicted a two score margin of victory for the cowboys to be the week's top picker- I doubt Jamie and Marshall are too mad about missing this one though.
Next week: Oklahoma State- Bye, Baylor- @ TCU