The rumor, which has been gaining steam over the last 48 hours amongst Tech and TCU fan sites, says that Cumbie would be making a lateral move to TCU to join Doug Meacham as Co-Offensive Coordinators.

Kingsbury had little to offer Friday about speculation Sonny Cumbie will be hired at TCU, but said he would understand if it comes to pass.

"I think it's a credit to what he's done here," Kingsbury said. "I think if he does take that job, we'll be proud he's coveted in that manner, that they'd reach out to him. That's the way the profession goes. When you have success like he's had, you're going to try to progress and move forward in your career."

To me, that sounds like a guy who knows his coach is leaving but nothing is official yet. This has all the signs of happening. We will know something mid next week.

The rumor, which has yet to be confirmed by any major media sources or the institutions themselves, claims that Cumbie was convinced to join the Horned Frogs staff due to his desire to coach QBs directly. A substantial pay raise is also believed to be in the works for Cumbie, who only made a reported $210,000 at Tech.

Adding more fuel to the fire Friday was the posting of a job opening on the TCU HR website, a typical precursor to any athletics hiring. A similar posting was made days prior to the Doug Meacham hiring last month. 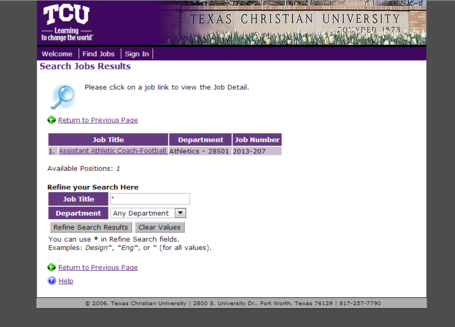 More on this as it develops.