The Business of TCU Athletics (2013 Edition)

Every year (for the last two years), FungoFrog takes a look at the latest TCU Athletics numbers, showing where we make money and where we spend it. Today, we look at the finances of the Athletic department from FY2013, a department that continues to grow.

Share All sharing options for: The Business of TCU Athletics (2013 Edition)

(Looking for the writeup I did on the finances of the University? How about on University pay and compensation?The following information is athletics only but hey, why not go do some re-education on TCU's finances while you are at it!?) 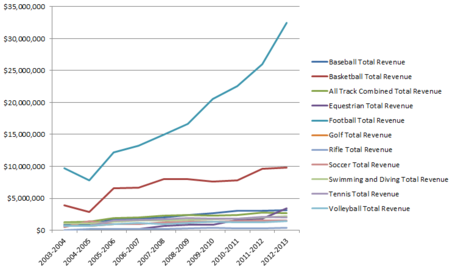 In my mind, this chart says it all... Football dominates, basketball comes in a respectable second, and everybody else is somewhere in the hunt.

The business of college athletics in FY2013 was once again all about NCAA Football, the sport where just about every Div. 1 school drives most of its athletics revenue. That doesn't mean athletics offices are in the black, far from it for most including TCU, but for a growing number of schools the science of "breaking even" is becoming more and more clear: Go big on football, compete in basketball, and don't let any other sport drag you down.

Equestrian saw a notable rise in revenue for FY2013 (calls made to TCU to ask why were not immediately returned), pushing it into the top 5, next to the usual suspects. That $416k for rifle may seem low but compared to that programs FY2004 number ($60,039), that program is riding sky high.

Of course, as TCU has seen athletic success it has also seen admissions success, making it possible for the administration to grow the school's enrollment while also lowering the admission rate. 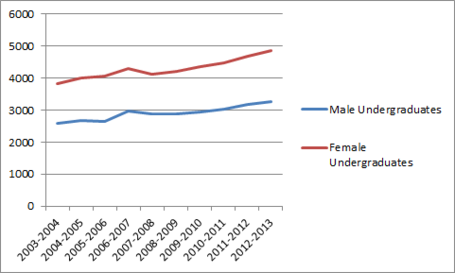 One quick note: You may wonder how these numbers are figured. Who gets credit for media revenue? General advertising? Sponsorships? While TCU has never confirmed this, it is believed these numbers represent a calculation (not a raw number) that gives proportional credit of revenue "generated" to each sport. Thus, football gets the lions share of credit for media revenue, but not all of it: basketball, baseball and volleyball will get some too. Same goes for general sponsorships, they are assigned proportionally by an internal formula that seeks to assign proper "credit" to each sport. That's why rifle "generates" $416,158 without selling a single ticket: Sponsorships, prize money, etc.

Not surprisingly, TCU athletics revenue grew yet again in FY2013, albeit at a slower pace than in year's past. Since FY2004, TCU athletics revenue has grown 238% with the vast majority of that growth coming from football. And yes, the Big 12 isn't going to hurt that number, but it is also not the single largest driver of revenue growth, since TCU was already spending far above its means before it joined the conference. The vast majority of that media revenue will serve to simply "balance the books" for TCU, not radically increase spending. More on that later.

In FY2004, TCU Football accounted for more than 45% of the total athletic department revenues. In FY2013, that number remains the same. 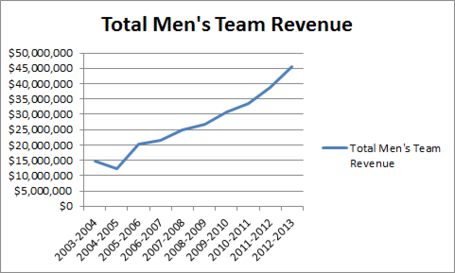 Not surprisingly, men's sports revenues have led the way for TCU, accounting for a majority of TCU's total revenue. 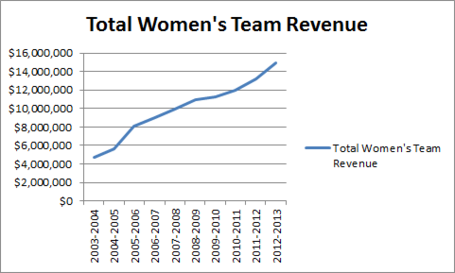 Women's sports may be the lower level producer, but they still produce a respectable chunk of change.

The one "alarming" number has always been the guesstimate of how much TCU is giving to TCU athletics to cover its "losses" each year. In order to be competitive with the big boys, the school made the decision years ago to run the department at a loss, while filling in the funding gap at the end of the year with universtiy funds. While TCU has never confirmed the below number as being this "filler" I believe it is a good gauge for just how much dough TCU kicks in each year to the TCU Athletics bucket. 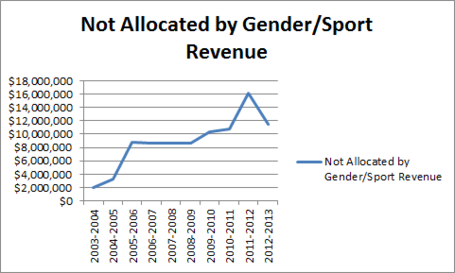 That large spike you see was the FY2012 number, otherwise known as the final year in the MWC where we were ramping up to be in the Big East/Big 12... Revenues had to come up to be competitive, but MWC media #s were... Low. In FY2013, TCU saw a $9 million increase in media revenue, accounting for the drop in extra funding needed... I expect we could see this "not allocated" number come down/stay steady in future years, depending on where the athletics department wants to take the total athletics budget at the end of the day. 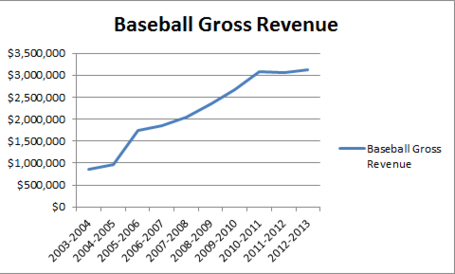 Baseball revenue has slowly been on the climb for TCU, although as you can see it has leveled off a bit the last few years. Blame that on the athletic department refusing to make changes to ticket prices and stagnant attendance growth the last few years. The additions of more party patios and the left field grassy area will help grow this, as well as a larger share of Big 12 media revenue. At the end of the day though, higher ticket prices will be needed to move this department forward from a revenue perspective. 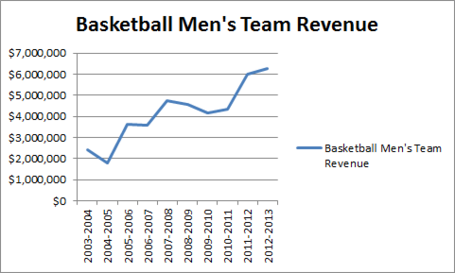 The revenue picture for men's basketball over the last 10 years looks a lot like the team's performance growth: better, worse, better, worse... But at the end of the day, not great. I have no doubt that with a more competitive men's team we will see more consistent growth and better numbers from Trent Johnson's squad, but until then we have to live with this shocking fact: Trent Johnson's reported salary ($1.6 million) eats up almost 26% of the team's yearly revenue... yikes! 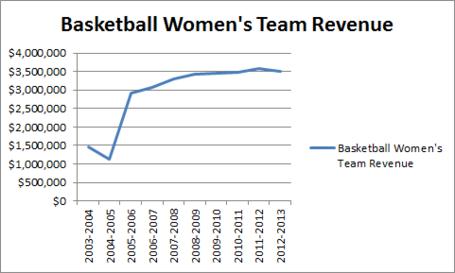 Ya, looking a little limp there ladies... Head coach Jeff Mittie hasn't had a winner in quite awhile, although TCU is usually reasonably competitive. Women's basketball is only a money maker for the elite, which we would love to be, but likely won't be anytime soon. For now, I am OK with this number, although I would like a steady $5 million a lot better.

As a department, basketball has a lot of room to grow. If healthy, you would expect basketball to produce $15-20 million for athletics, instead of the paltry $9 million it currently supplies. Turn around years for the men and women will go a long way to making that happen. 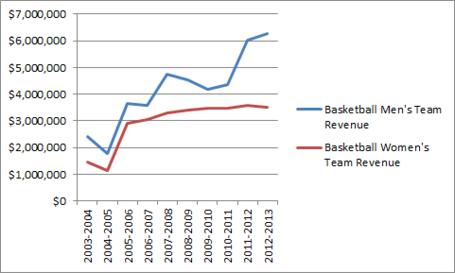 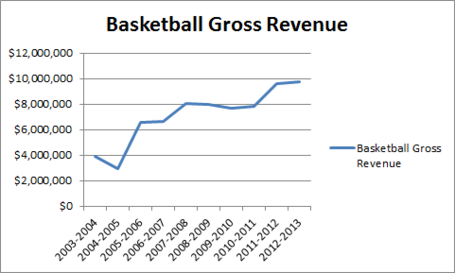 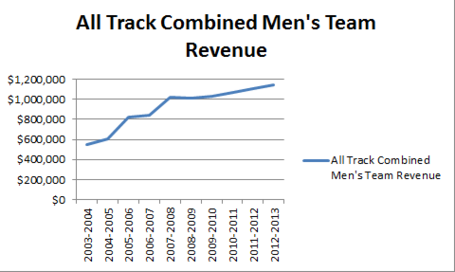 Nothing much to say about track... The sport doesn't pay for itself but considering the incredible athletes that we have produced, I wouldn't ever argue to get rid of it. 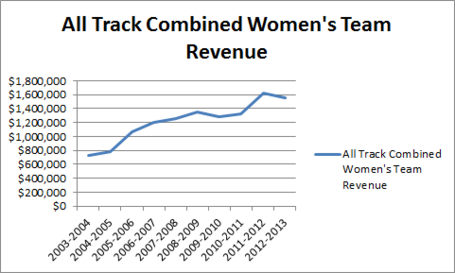 And here are the numbers for the combined track & field teams... 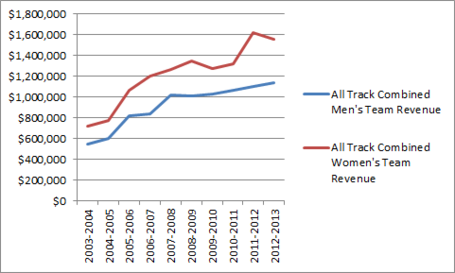 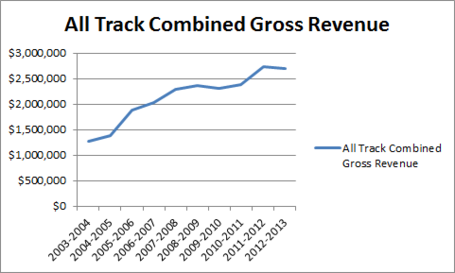 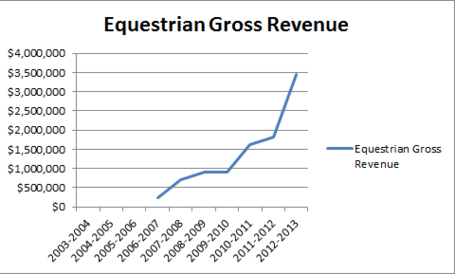 Don't be fooled, Equestrian spends quite a lot every year. Thankfully the horses are a "gift" to TCU so that expense is saved, but this still is not a winner for TCU. 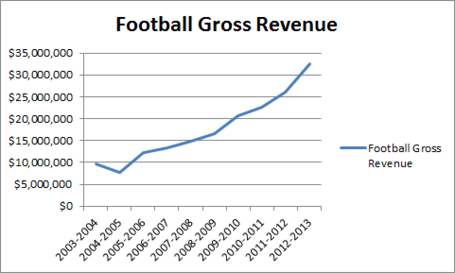 Here we are, the granddaddy of them all... That trend line should continue to increase (and I am sure season ticket fans agree) as higher media revenues and higher ticket prices funnel more and more revenue into the department. TCU spends more on football than most schools due to high tuition, but actually turned a profit this year of about $1 million, so HEY WE ARE DOING SO WELL! 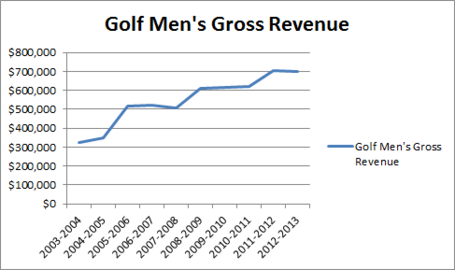 Ya... I would never expect Men's Golf to be a big winner, but come on now... JJ Henry can't hook you guys up with some more sponsors? 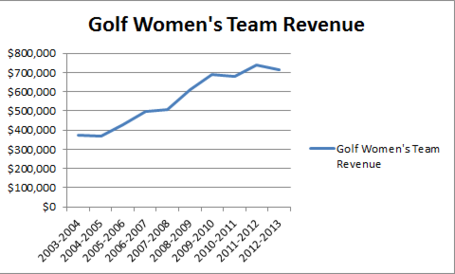 Once again, the ladies lead the men... Not terribly surprising, but it is also within the margain of error... The race to $1 million is on!

Overall, the department brings up the rear in terms of revenue... Which is not at all surprising. 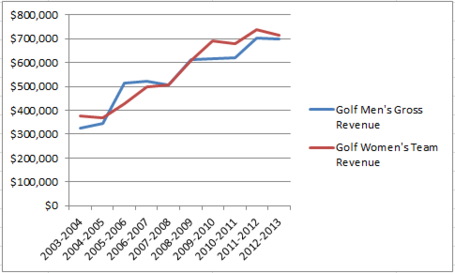 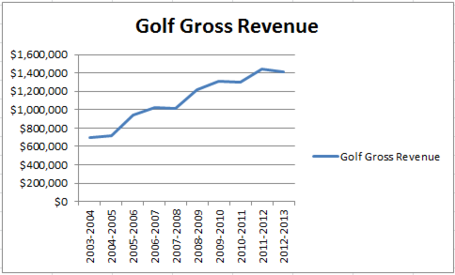 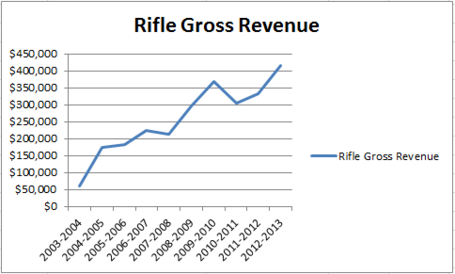 Considering where they came from and the sport being almost totally unknown, this is a pretty outstanding number... Good for a 593% increase in 10 years... Pretty good ROI.

With soccer popularity on the rise in the US, this isn't a surprising number... In fact, this is why I have been such a proponent of adding a men's soccer team... I think it would go over pretty big. But, regardless, this is why you see donor money and investments in soccer, the girls can hold their own and generate, for women's soccer, pretty strong revenue numbers. 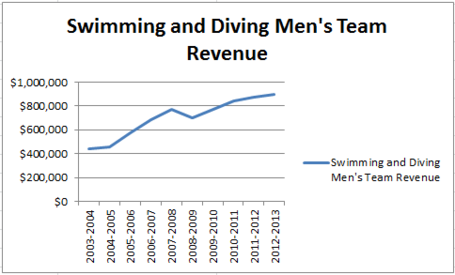 Yet another sport that is likely a loser for TCU Athletics because of the large scholarship and facilities costs that go into it. And, another instance where the women are better than the men.

Overall, you can't expect much here... Making swim meets not free might help, but not enough to make it worth the potential negative cost of turning off what fans we do have. 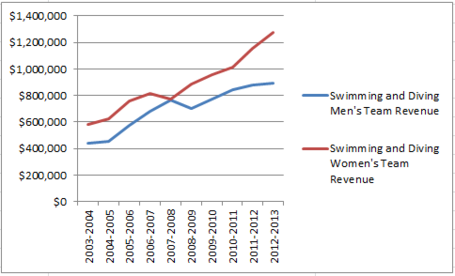 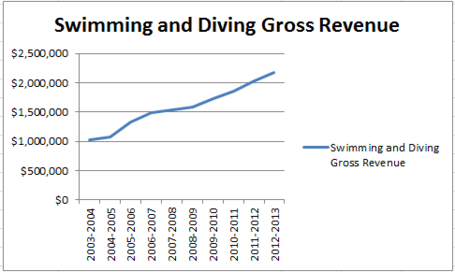 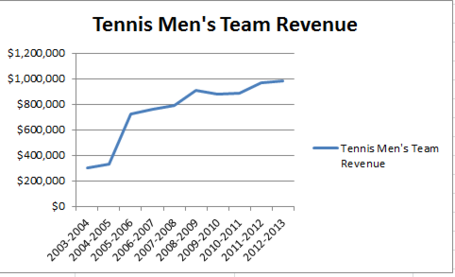 TCU has one of the most "attended" tennis programs in the country, thanks to the fact that it is free, fun, and they give out food. Time to charge something? Probs. 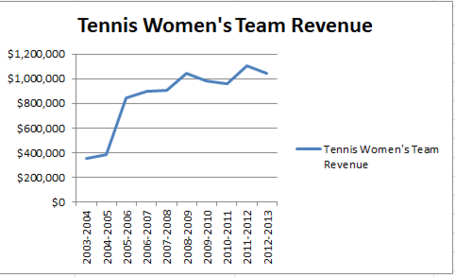 Once again, the ladies leading the men... Very strong. 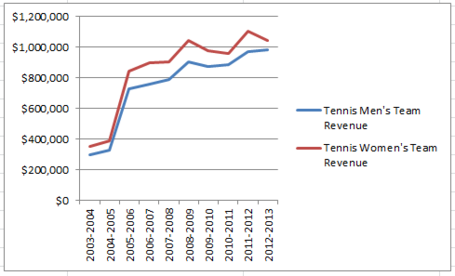 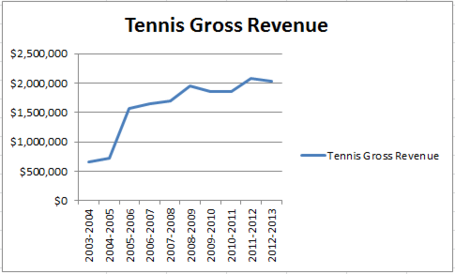 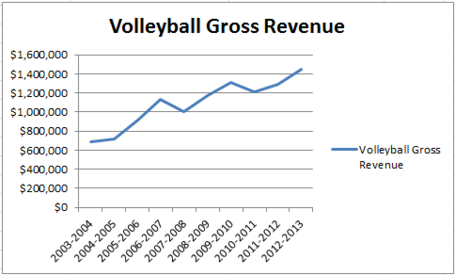 The better this team gets, the higher the revenue will go. With media revenue increasing and ticket revenue likely to increase (like baseball, it is about time), Volleyball is well positioned to move into the $2-3 million range in coming years.