The crew breaks down the final game of the 2013 season

This recap is going to be our season in a nutshell, but the highlight for TCU Saturday was once again its brilliant defense. Yes, Baylor put up 41 points, but half of those were owed to our offense. I’d go as far to say that this was TCU’s best defensive performance of the year. Oklahoma State may have held them to fewer points, but the Cowboys didn’t have to face Seastrunk, Martin, and Linwood.

JV earns his own spot this week as he held Baylor receiver Antwan Goodley to one catch for a measly 12 yards. Goodley, who is arguably the Big 12’s best receiver, was averaging 119.3 receiving yards per-game before Saturday.

It hurts to say this, but Casey Pachall’s final performance as a Horned Frog was the Achilles’ heel Saturday. In addition to two pick-sixes, Pachall’s passing as a whole looked terrible. Simply put, whether high or low, he wasn’t hitting his receivers. Pachall’s decision-making, something he’s usually really great at, was equally as terrible. There were quite a few times where Pachall had plenty of room to run and get the first down but opted for awkward, incomplete passes instead.

And once again (drum roll)…Rusty Burns and Jarrett Anderson. It was mind numbing to see TCU not get a touchdown on that first drive after two very big runs from BJ Catalon. The dynamic duo’s brilliant play calling Saturday resulted in some shattered glass, shattered dreams, and a few tears at an unnamed Austin establishment.

A Season To Forget

I don’t think Gob Bluth has enough Forget-Me-Nows to wipe 2013 out of my memory. Sure, the Frogs’ first two seasons in the Big 12 could’ve gone worse…but given the high hopes going into each season, they’ve both been huge let downs. Even though TCU’s only losing Verrett, Pachall, Waymon James and Elisha Olabode, don’t expect the Frogs to get any pre-season love next year.

There's no better summary for TCU's season than "Almost".  There was only one game this season that TCU didn't have a good chance to win in the fourth quarter, and that was the monsoon game against Texas.  That's really close to 11-1 and co-Big 12 champions.  What cost us?  A few poor decisions with the ball and a whole lot of poor decisions in playcalling (and Brandon Carter).  That's the difference between 11-1 and 4-8.  Interestingly, if you google "Jarrett Anderson" the #2 result is "Fire Jarrett Anderson" from this very blog.  Let's do that, now.

I know he can make some plays, but he is the biggest reason we lost this game, and not just because of his slack effort getting his head around and then bouncing the ball off his hands on TCU's last play of the day (though that was disgusting), but on the second interception he absolutely dogged it in pursuit after a missed tackle that could have saved 6.  I'm not saying you should have made the first tackle for sure, Carter, but you mean to tell me that Orion Stewart is so much faster than you that you lose ground when pursuing him at full speed? 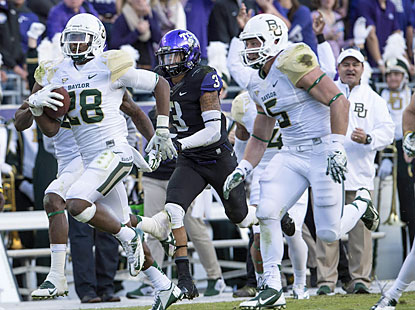 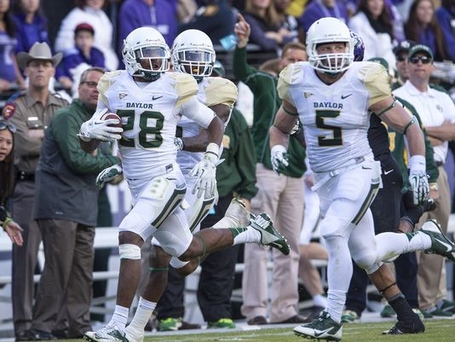 No chance.  Next year is your senior year, Brandon, and you're going to be expected to be a leader on this team.  You have a long, long way to go.

To Jason Verrett- you have been an absolute joy to watch these past years, thank you so much for coming back and being the best corner in America this year.
To Casey Pachall- I'm very proud that you came back this year.  That couldn't have been easy, but you faced the controversy with grace and even if you never regained your old form it was good to see that you've become a man.
To Waymon James- For all the misuse you suffered this year I apologize.  However, whatever incident caused you to be removed from the team these past few games, I sincerely hope it was worth it- we could have really used you.
To Elisha Olabode- It was incredibly comforting knowing that you were back there and that the Frogs weren't going to be beaten deep.  You weren't challenged as much this year, which lowered your pick totals, but I appreciate the way you played each and every week.
To Jon Koontz- You bode your time waiting for your shot, and you delivered.  I have tremendous respect for that.

Thank you to all of TCU's seniors, I'm sorry the season was so disappointing, but the things you've accomplished at TCU will not be forgotten.