How I became a TCU Fan

It's officially the offseason, so what better time for an origin story?

Share All sharing options for: How I became a TCU Fan

Let me start off by apologizing for my absence from the site since the Baylor loss.  In some respects I've still been around in the comments and such, but I haven't been churning out articles with my usual rapidity (or any at all, really).  There are two reasons for this- firstly, I'd agreed with Jamie ahead of time that after football season ended that I needed to take my foot off the gas for a while on the blogging front, because it was getting to be a real slog.  I was still enjoying the writing, but when the Purple Wimple made his midseason departure I was writing at least one post a day (three on Saturday) every day apart from Monday... where I just contributed to the group post.  As my posts tend to be wordy buggers (no Links O' War for me) it wasn't a particularly good pace for me to continue on even if it was good for the blog.  So, a bit of a break was needed, but it wasn't intended to be a total break until the second reason reared its head.

Shortly after TCU's season finale against Baylor my grandmother passed away after a long bout with dementia, and though I've been dealing with it fairly well in the day to day it threw a block up in my writing about TCU because my maternal grandparents were about the biggest factors in my life when it came to my TCU fandom.  So, to try and work out some of these thoughts and get back into a more healthy mindset (well, as healthy a mindset as a TCU fan can be during basketball season) I thought I'd write out a bit about how I became a TCU fan in the first place.

As some (most?) of you know, I didn't actually attend TCU for my university career which makes me a bit of an odd duck in the TCU fandom.  Unlike some teams that inspire legions to fanatical devotion by being persistently good at football (including one in our own state) or even just famous, TCU is not known for having many fans who didn't actually attend universities there.  However, also unlike many in the TCU fandom, I had actually wanted to go to TCU from the time that I was very small, before practical issues about tuition at TCU sent me to a less purple locale to start university before I actually finished it a world away.  TCU was simply the university I always assumed i would go to because it was the university I associated myself with from the time I was very young, and for very good reason. 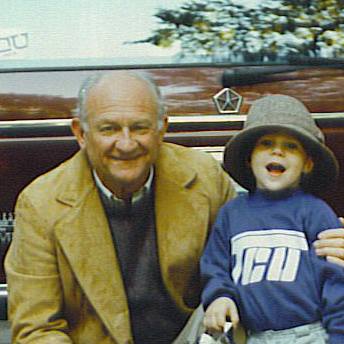 Man, I was cute, huh?  (Before you start asking "What happened?" in the comments, remember that Jamie isn't the only one who can ban folks).  Rocking the Power T next to my grandfather, who worked for TCU for over two decades and made sure that I had a ticket available to go to every home football and basketball game from the time I was old enough to actually need a ticket to get through the gates (and I went to plenty before that too).  Going to my grandparents house on weekends where there was a TCU game was simply a part of life, and one that I loved- which is kind of amazing given the era of TCU football that I grew up with.

The year I was born TCU played against West Virginia in the Bluebonnet Bowl, and I would be ten years old before TCU made it to a second bowl game (the famous Poulan Weedeater Bowl) which meant a whole lot of seasons worth of going to games with my grandparents and seeing the frogs lose- and not just in a-Brandon-Carter-Stop-Tipping-Balls-Arrgh way either, we got beaten down as often as not, and I can't imagine keeping a little kid interested in a very bad team that kept losing in an almost empty stadium (unless it was filled with Aggie fans) was easy.  Back in those days a 4-8 season was a promising start- something to build on going forward- not a disaster that saw heads roll at the end, and the idea of TCU playing in something like the Rose Bowl would have been as ridiculous a dream as the Dallas Mavericks winning an NBA championship.  Even while the Cowboys were winning Super Bowls just down the road, I always considered myself a TCU fan first- something I never really thought about at the time, but when looking back on it it's kind of amazing, as the things I remember most about those games was making the long walk down the bleachers to the edge of the field (it was easy because the seats were empty) to get a better look at the players and yell for the Frogs and making the walk back to the car after one particular loss where Texas Tech won the game on a hail mary with no time left and I was trying to convince people that since we had been leading for most of the game it should have counted as a win for us.  I remember playing football in my front yard with the little purple and white plastic footballs they'd give out at home games about once a season with my two neighbors who were BYU fans and arguing over whose team was better.  I guess it never really hit me that TCU was a bad team because my grandparents cared so much about it- TCU was simply part of the family.

An addicting part of the family as well, as attending TCU games with my grandparents eventually turned my stepfather, a man who not only did his undergrad at SMU but played for the Mustangs back in the cash money SWC days, into as die hard a Frog fan as you can find.  Through the years our little group in the stadium grew as my aunts and uncles had children who became bleacher creatures while at the same time TCU grew to be a team that could actually win conference championships and be desirable to other conferences.  The fact that other conferences were as interested in us as I had thought they should have been as a child was a shock, and a reminder that the old days of teams that received dreadful beatdowns at the hands of Texas A&M (Jackie Sherrill will always be the king of bastards) were behind us.  I was crushed and confused when Coach Fran left TCU for Alabama, as I knew nothing of college football outside of TCU so the idea that anyone would leave the comforts of Fort Worth to live in Alabama of all places was baffling.  What we were left with was the defensive coordinator that so thoroughly dominated opposing running games (but all too often gave up long bombs on third down) to take us into that new conference that had wanted us.  What we ended up with with was a much bigger extended family in the stands, as suddenly there were people in the seats down near the field.  Throughout all of that, the two things that you could always count on being able to hear on TCU football telecasts were the part of "Rammer Jammer" where the fans yell "We're gonna beat the hell out of you!" and my grandfather's superlative whistle when things were going well.

When my grandfather Jack Arvin passed away after a battle with cancer in 2006, his wife of 59 years kept plugging along in her refusal to miss a home game, even as the fanbase grew, the stadium was torn down and rebuilt and our seats for the past decades were passed over to high dollar donors (which I still have some lingering resentment about- those donors weren't in the stands in the 1-10 season).  My grandmother was a small woman in stature, but as big a woman in every other area you could imagine.  She loved her family more than anyone else could have, she protected her children and grandchildren with a ferocity that was unrivaled, she was absolutely unwilling to accept "I can't do that" from people and even when dementia had ravaged her mind that once resembled a steel trap she could still recount every wrongdoing that Ann Richards and Baylor had done to secure the Bears a spot in the Big 12 if given the slightest opportunity.  She had grown up an Oklahoma girl and would happily greet total strangers dressed in crimson and cream with a loud "Boomer Sooner", which was doubtlessly confusing to them coming from a woman as decked out in purple as anyone had ever seen, but her loyalty to TCU was much like her loyalty to her family- without question.

The last time I went with her to a football game was the 2012 Oklahoma game, when a very large portion of who my grandmother had been was gone, but she still made it to every game she was physically able to attend.  Though the outcome was frustrating (no pass interference on fourth down?) the afternoon was a wonderful one, as together we got to see TCU take the field as members of the Big 12 conference.  My grandfather wasn't there, but our TCU family had grown from a handful to over 40,000 on that day (there were several thousand Sooners as well, each one in our seating area getting a sincere Boomer Sooner from a tiny 87 year old decked out in purple) and it felt right.  On the first of December, 2013 TCU lost one of its biggest fans and I lost my grandmother, and no matter how much of her had already been gone due to the dementia it's a hole that will be impossible to fill.  However, it's a hole that the university felt as well, as the flags at TCU flew at half mast on the day they were informed of her passing, a sign that our little family is not alone.  We have her memory, we have each other and we all have TCU- a bigger family than it once was, but one that matters as much to us now as it ever has.