With less than five days remaining until the first pitch of the 2013 season for the Frogs, let's wrap up the season preview and provide some final predictions as we look ahead to the first Big 12 season for TCU.

The season is upon us... The previews are done (linked above), the alumni game has been played, next stop: Mississippi.

All the offseason talk is behind us, no more scrimmages... Time to play ball.

Just a few notes to get to today... The first SERIES PREVIEW (man, it is exciting to say that) drops on Thursday, ahead of a 4pm CST first pitch at Ole Miss.

- On Tuesday or Wednesday of this week, Frogs O' War will offer an exclusive look at the major struggle TCU Baseball is dealing with right now: Scholarships. TCU isn't the only school dealing with this problem, but compared to some of the other major players in baseball (large public schools, Rice, Stanford, etc) TCU is at a major disadvantage that is hurting our ability to recruit, and thus, compete. Much more to come.

- There were several significant notes that came out of the alumni game: Trevor Seidenberger started for the Varsity team, and was a mix of good and bad. This is as expected, Trevor has been a mixed bag so far, but I think he could play a major role as a reliever. He would be a Sunday starter for every other team in the Big 12 this year, TCU has that much talent.

- Keaton Jones started at short stop with Hendrix in left field, signaling to me what has been known for a few weeks (Jones held onto his job). Suiter DH'ed as expected, and the rest of the infield/outfield was laid out just as we thought it would... Indeed, this team has had an alarming low number of injuries and problems this year, far fewer than I could remember in recent years. Whether this is good (we are as close to 100% as possible) or bad (we don't know what we don't know) I do not know, but regardless I would rather be where we are today than have 5 guys out or shaky. To start the year, we will have the team we penciled in at the end of fall ball, we can fix and arrange as needed going forward.

- Looking ahead, when will TCU face a lefty starter? Through the first six games, TCU might see 6 RHPs... Good for us, with a lefty heavy lineup.

- TCU will open 2013 play ranked #14 in the College Baseball Insider Composite poll, which combines five different polls into one average ranking (Baseball America, Collegiate Baseball, National College Baseball Writers Association, Perfect Game, USA Today Coaches Poll). TCU is ranked as high as #12 in one poll (USA Today), and as low as #15 in another (Collegiate Baseball). The top five of the composite poll is as follows: Arkansas, North Carolina, Vanderbilt, LSU and UCLA. The only other Big 12 team listed in the composite poll is Oklahoma at #20.

- The only issues here have to do with where Hendrix will play and what spot in the lineup he will bat in. Keep an eye on Jerrick Suiter as well, he is coming on fast and might catch/play OF sooner than thought... But, if Bacak is hitting, can you take him out from behind the plate?

- You heard it here first: KEEP YOUR EYES ON THESE GUYS, Hennessey, White, Daniels, A. Johnson. These guys are coming on strong and all could play LF or DH, and all are going to likely push their way into the lineup.

Your likely first arm out of the bullpen: Justin Scharf or Trey Teakell or Riley Ferrell or Alex Young 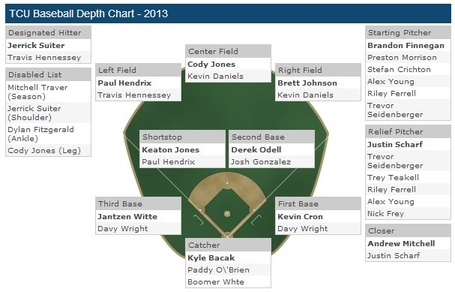 Mitchell Traver (Arm): Out For The Season
Jerrick Suiter (Shoulder): Day-to-Day, limited to DH for now
Dylan Fitzgerald (Ankle): Day-to-Day, might not be available this weekend
Cody Jones (Leg): Likely To Play

- I generally dislike preseason predictions, they seem kinda dumb. Who knows what is actually going to happen? There is so much turnover in college baseball every year, it is almost a crap-shoot. But, for the sake of fun, this is my two cents on how the Big 12 will finish out.

- First off, I see TCU as a SR team RIGHT NOW. If the starting pitching gets better and the offense reaches their top potential, this could be a CWS team... A lot will depend on what we can't control, such as home field advantage in the R/SR stage and who we draw in those contests. Unfortunately for TCU, 2013 might just be a buildup towards 2014, a season that could literally be magical in just about every way. But, what do I know??

- Oklahoma has some talent left, including the best pitcher in the league on paper (Dillon Overton)... They also have the worst ballpark and worst coach, but that has nothing to do with this, just wanted to remind you.

- You can't keep Texas down forever, and the Horns will likely have just enough offense to get back to a regional (at a minimum) this year. Parker French is a true Friday rock, but I don't know if even Texas knows what they will get from the rest of their rotation. They have added youth to the team as well in a couple of spots, but man, if you look at their recruiting classes for 2013 and 2014 it is a bit scary... 2013 is top heavy and likely MLB bound, 2014 is sparse right now. After a full year of recruiting, the Horns might shake off the ghost of Harmon Recruiting, but I don't see it right now in the results.

- Oklahoma State and Texas Tech are my reach teams this year, I can see scenarios where both make it to the 30 win mark and a regional. Or, they could both be bad. As could Baylor, who I am leaving off my reach list because, well, they are Baylor. Kansas State might have offense, Kansas will have nothing much, and West Virginia is in startup mode right now (but not for long).