The relieving core for TCU in 2012 was a bit rocky, especially after Preston Morrison moved to the rotation. But, behind workhorses like Justin Scharf and Andrew Mitchell, this group should be a strength for TCU in 2013.

This preview is going to be different than the rest.

I could run down all the stats and stories from 2012, giving you a detailed description of what every returning player could bring to this team's bullpen depth.

But really, that sounds boring... And I am tired, and don't want to.

So instead, you get something even better, an analysis of what the bullpen will likely look like come Opening Day 2013, and what each guy could bring to the table this year (including some youngsters).

First, let's run down your likely bullpen order to start the year:

Quick things to remember: Mitchell is definitely your closer, Scharf definitely your setup guy... But after that, who knows. Seidenberger, Ferrell and Young could all be starting and Morrison/Crichton could be back in this role, we will have to wait and see. But, since Jim Schlossnagle typically gives freshmen time to get used to pitching at this level out of the bullpen first, I wouldn't expect it until game 8 at the earliest.

ANDREW MITCHELL
If you don't know Mitchell by now, you aren't paying attention. I remember watching Andrew breakout at TCU, on the road at Baylor in his first start ever (I think), dude was just lights out, 92-93 with total control of the curve. I was sitting right behind Matt Curry and his family for most of the game, and it was clear the current MiL'er was impressed.

Mitchell is now a full-time closer, a job that he was likely destined to take career wise whether he wanted to start or not. Now, he doesn't have to worry about much except: Throw gas, throw quality strikes, be aggressive, and drop the hammer (when necessary). It is a simple task for a simple pitcher with electric stuff, as long as he works in the zone we should be fine.

JUSTIN SCHARF
Justin really emerged for me down the stretch of the 2012 season, as he was tasked with more and more responsibility the kid seemed to just step up every time he was asked. I think maybe he was asked to pitch a few too many times down the stretch in 2012, and thus his performance suffered, but a year in the throwing/lifting program at TCU should have him ready for a full 2013.

Scharf isn't just a go-to guy, he is a stealth weapon that needs to be used often, but primarily late. If we can find an appropriate bridge to get the Frogs to the 7th or 8th innings, the Scharf/Mitchell combo should be lethal all year long. 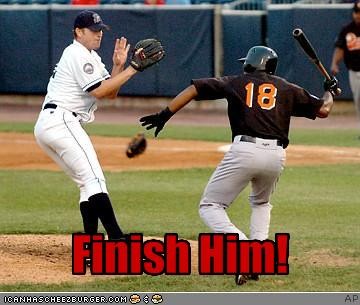 (this is what we do NOT want to happen, but still hilarious)

This next set of guys is pretty fluid, nothing is set in stone... You can refer to the Starter's preview for notes on most of the major players, but I wanted to include some thoughts on others here as well...

Trey Teakell
Teakell is kinda an odd ball. Kid has pretty good stuff and he throws lots of strikes, it is the "quality" of those strikes that is in question. After a short stint starting in 2012, Teakell has been bumped down the depth chart for TCU purely due to an influx in talent, but I still think Trey has something to contribute in 2013. If Tuesday starting isn't the need, middle relief could be.

Nick Frey
I am not a Nick Frey fan, and frankly I don't want to kill the kid on here so I will just say this: If TCU is using him in any situation other than mop-up duty, something has likely gone very wrong. The kid has an OK fastball and OK curve, but never can put it together (since that one breakout start), and guys that can't be consistent always get under my skin. Maybe this is the year where he does it, I hope so, but we shall see. Since he really isn't very durable, he is likely more useful as a starter or "once a weekend reliever" at best.

I expect those two guys to get looks early in 2013, until this monster is ready...

Tejay Antone
Tejay, when he is on, could be the next big thing at TCU. Or, he could be Tyler Duffie (no offense). In fact, maybe that is the best way to look at Tejay right now. When he is on, he is a ground ball machine with a heavy sinker, really good overall stuff. When he is off, well... I think he will pitch this year, and it could be in meaningful Big 12 situations, but probably not to start the year.

Travis Evans
Travis didn't get a lot of play last year, but was fairly highly regarded coming out of high school (Round Rock). If he can figure out his control, he might be a valuable LOOGY for TCU this year, something not many college teams have. He pitched fairly well over the summer, time to put it on the field in the spring.

Brian Trieglaff
Brian is a redshirt candidate right now, but don't let that deceive you... this kid could be special in time, the stuff is all there. Same is true for Garrett Grim, who will likely be held back a year.

Nick Poulos
WARNING: PRESTON MORRISON COMPS ARE NOT ALLOWED. But really, Nick is your Preston Morrison of 2013 in this regard: He is a freshman walk-on with mediocre stuff (84-86), throws strikes, and isn't looked at as a primary contributor right now. Could that change? Maybe. He could see action in blowouts to start the year, but not much more than that.

That is it, season preview's are done... Recap comes Monday, along with a feature story next Tuesday/Wednesday on the behind the scenes struggles of TCU Baseball... Then Thursday, it is series preview time, with a Friday first pitch in Ole Miss right behind it.