The redevelopment would begin once all funds have been raised, likely after the 2013-2014 season.

Share All sharing options for: Daniel-Meyer Coliseum Set To Receive A $45 Million Redevelopment

TCU Athletics is set to announce plans to redevelop Daniel-Meyer Coliseum today, after approval of said project was recently granted by the Board of Trustees. The project, which has yet to be full funded, will reinvent the front facade of the Coliseum, widen concourses, add bathrooms, and redevelop the team locker rooms and facilities.

TCU Athletics plans to continue fundraising through November, with the project set to begin following the 2013-2014 season.

The text of the official release is found below the graphics (click to enlarge): 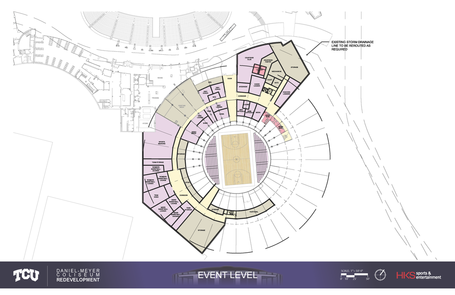 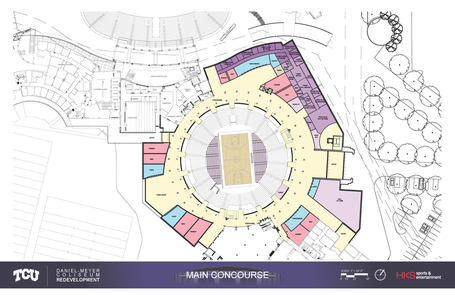 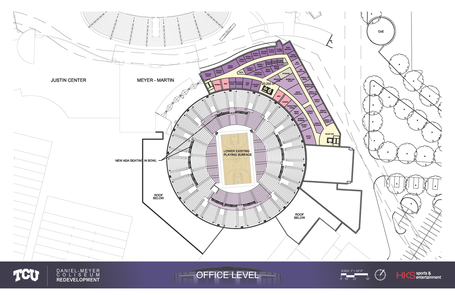 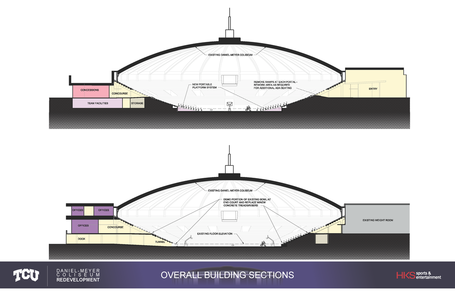 The TCU Board of Trustees have approved design of a $45 million renovation to Daniel-Meyer Coliseum with the project receiving a lead commitment of $10 million from Ed and Rae Schollmaier. The renovation project will begin once all the funds for the facility have been raised.
"Having the opportunity to renovate Daniel-Meyer Coliseum helps TCU achieve its ongoing goal of optimizing its physical campus," TCU chancellor Victor J. Boschini Jr. said. "We are very grateful to Ed and Rae Schollmaier for their continued support of TCU."

"We are most appreciative of the Schollmaiers, Chancellor Boschini and our Board of Trustees for providing the leadership and support on this project," TCU director of intercollegiate athletics Chris Del Conte said. "Having new facilities for our basketball programs would continue the tremendous momentum we have on campus.

"In addition to the renovation benefitting our student-athletes, we'd be excited for the Horned Frog Nation to experience a more fan-friendly venue. The new Daniel-Meyer Coliseum would be a tremendous source of pride for the TCU and Fort Worth communities.

"Depending on fundraising, my hope is to have construction begin this time next year. This project is another example of the Chancellor's vision for TCU being second to none. His impact on TCU is seen every time you walk on this campus."

The new building facade for Daniel-Meyer Coliseum would architecturally complement Amon G. Carter Stadium and the TCU campus. The interior would have a lower playing surface to increase courtside seating and provide a more intimate atmosphere. Wider concourses and multiple public entries would ease congestion. The fan experience would be further enhanced by new concession stands and restrooms as well as increased points of sale. A new courtside club lounge would be constructed on floor level.

"We would like to thank the Board of Trustees, Ed and Rae Schollmaier and other members of the TCU community who are helping to make this ambitious project a reality," TCU men's basketball coach Trent Johnson said. "In my short time on campus, I have been truly impressed by the support of those individuals intent on seeing us successfully compete at the Big 12 and national levels. A redeveloped Daniel-Meyer Coliseum will be a vital piece to those efforts. This project will result in a new, unique basketball environment that all those associated with TCU will be proud to call home for years to come."

"We appreciate the Board of Trustees and Ed and Rae Schollmaier for their vision and commitment to this important project," TCU women's basketball coach Jeff Mittie said. "There are so many exciting parts of this project from the locker rooms and student-athlete areas to the new courtside seating, making it one of the most exciting places to play in the Big 12. This will be a source of great pride for our student-athletes and the entire campus."

Additional features of the proposed new Daniel-Meyer Coliseum are a TCU Athletics Hall of Fame display on the concourse level, offices for Olympic sports and administration and a larger main ticket office to support both DMC and Amon G. Carter Stadium.