FOW: We Support Autism Awareness Month, So Should You

Today marks the beginning of International Autism Awareness month, and all of us at Frogs O' War ask you and yours to take note, spread the word, and consider donating time and/or treasure as you feel appropriate.

Share All sharing options for: FOW: We Support Autism Awareness Month, So Should You

Autism. It used to be that thing you weren't quite sure of. It was that thing that you learned out of watching TV's version of Parenthood, or the movies Rain Man or What's Eating Gilbert Grape? It's still not something that impacts every family, but by now, if you think about it, you know someone with a family member that has autism, or have heard about it.

Whether parents are getting the diagnosis earlier, the growing awareness of it in the medical community, the expansion of the mental disorder's classification, or the fact that it's becoming more and more common regardless of these factors, autism now touches everyone. Below illustrates the alarming expansion of those on the autism scale: 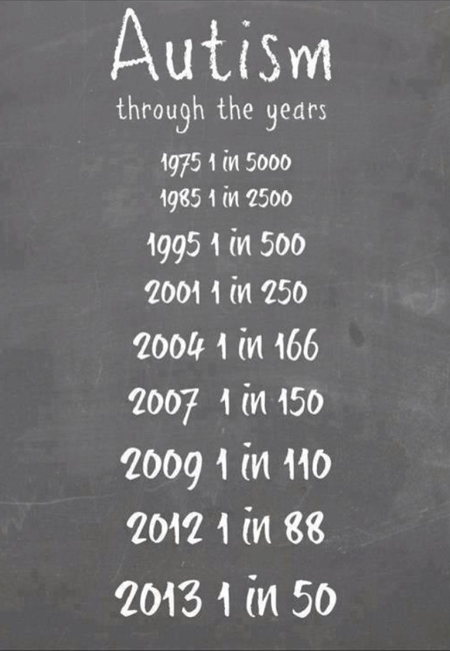 Today marks the beginning of International Autism Awareness month. To date, there is no direct understanding of why autism occurs (although science is getting much closer). To date, no matter what some may say, there is no cure.

There is, however, a great deal of hope in therapy-therapy that needs to start at the earliest point a diagnosis can be made, and it is here that you can make a world of difference. Somewhere, there are parents wondering if their child is autistic. Or, there are parents out there that see different behaviors than they would expect from their child, and aren't aware of the signs. That is what this autism awareness campaign is about.

Today, Frogs O' War challenges you to do this: Spread the word about Autism Awareness, and consider donating your time and/or treasure as you feel appropriate to help further the positive efforts of many to fight Autism, and hopefully one day understand the disorder.

Spread the details below to others. Pass the link via Twitter or Facebook. Encourage someone you know that may think their child could have autism to read. In doing so, you help increase awareness.

The following is from the Autism Society (http://www.autism-society.org)

Autism is a complex developmental disability that typically appears during the first three years of life and affects a person's ability to communicate and interact with others. Autism is defined by a certain set of behaviors and is a "spectrum disorder" that affects individuals differently and to varying degrees. There is no known single cause of autism, but increased awareness and funding can help families today.

In March 2012, the Centers for Disease Control and Prevention issued their ADDM autism prevalence report. The report concluded that the prevalence of autism had risen to 1 in every 88 births in the United States and almost 1 in 54 boys. The spotlight shown on autism as a result of the prevalence increase opens opportunities for the nation to consider how to serve these families facing a lifetime of supports for their children.

Currently, the Autism Society estimates that the lifetime cost of caring for a child with autism ranges from $3.5 million to $5 million, and that the United States is facing almost $90 billion annually in costs for autism (this figure includes research, insurance costs and non-covered expenses, Medicaid waivers for autism, educational spending, housing, transportation, employment, in addition to related therapeutic services and caregiver costs).

Please join Frogs O' War in spreading the word, and please consider helping the cause. EVERYONE CAN MAKE A DIFFERENCE.