This is my intro paragraph. There are many like it, but this one is mine. I rely on this paragraph to relay my thoughts and feelings before delving into the deeper matters at hand.

Question #1: Women's Softball. With this NCAA sport being highly competitive in the Big XII, do you see TCU adding softball, another Title IX sport, any time soon?

I wish. There's nothing this guy loves more than watching a husky woman wield a metal stick. Alas, I don't see it happening in the Purple and White any time soon.

Question #2: Winning the whole enchilada (Big 12 tourney) is most likely the only way the Frogs see any post-season regional action. Rate the field, is that too tall of an order or "so you're saying there's a chance?"

Definitely a chance. Also, I'm not wholly sure we'll have to rely on winning the tournament to sneak into the playoffs. Yet. Give it 3-4 weeks, like you said, and that could be a totally different story.

Question #3: Softball? How about bringing back men's soccer?

I imagine if we had a men's soccer team, it'd look something like this. (We're the defender).

Question #4: Tony Romo: Good contract or were the Cowboys backed into a corner?

Bro-love for Tony aside, I think it was a decent decision by Dallas. Look, they aren't going to find the quarterback of the future in this draft, because they have to address greater needs. I actually wrote a full piece on the topic last week. Might as well sign a guy who has been one of the best quarterbacks (statistically) for the past seven seasons. Other teams would have gladly written that same check to get him. Now, you have a good quarterback locked up and time to find a true successor.

Bringing bro-love back into the picture. Sports.

Question #5: Of the 32 current NFL GMs, where do you rank Jerry Jones?

Question #6: How many more ding dongs for Cron this year?

Question #7: Why does TCU have so many catcher on the roster? Also I think Paddy O' Brien should play full time just because he has a kick ass name.

I have no idea why there are 5 catchers on the roster. Oh wait, yes I do. They're all bad and we're trying to duct tape some sort of backstop together with all five of them. Like a human centipede catcher type deal.

Paddy O' Brien. Awesome name...for the beer drinking champion of the world.I really don't know anything about him, to be honest.

Question #8: Is TCU the whitest team in baseball (paraphrased)?

Most likely. However, I'm sure the Canadian national team would give them a run for their money.

Question #9: We should have a Frogs O' War Tailgate part (at Baylor where we can s-talk Ann Richards).

Yes. Here's a picture of Ann Richards holding a gun, because I haven't used a photo or gif in like five questions. 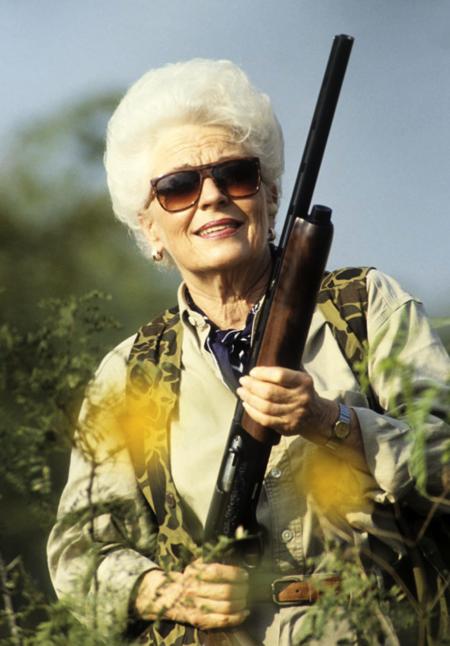 Question #10: Is there any chance Casey Pachall doesn't take 80%+ of the snaps vs. LSU (not including injury factor)?

No chance. None. He will probably take 95% of the snaps. He'll even take snaps for LSU, but he'll just throw picks to Jason Verrett.

Question #11: If you were a hot dog would you eat yourself?

Question #12: Do Tech people hate us because a) scare; we pose a threat; b) they feel inferior, dust storms suck; c) the rash has mutated into a brain disease.

All of the above, as 97 so deftly pointed out. (Of course this doesn't include my wife, who is a beautiful, intelligent creature). I'm going to catch hell if she reads that.

Question #13: What uniforms do you think/what do you want to see TCU wear vs. LSU?

Answered this one already, but chrome. They should wear all chrome everything. And Jerry should turn the lights up extra high (light those damn candles twice) so the glare is blinding.

Question #14: What is a frattress?

Glad I looked this up on my phone and not my work computer. Urban Dictionary defines frattress as:

A young college female, often times a member of a sorority, who spends an excessive amount of time having sex with brothers of a fraternity. The term derives from fraternity + mattress, because the slut spends so much time under brothers that she might as well be their bed.

And Fungo totally knew what that was.

Question #15: What is the next statue for the stadium?

I like the LT education idea, but I'm going to go with this: 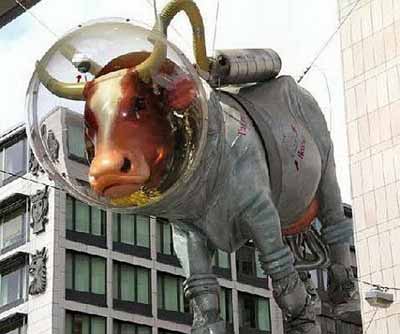 Space cow does not mess around.