TCU Press publishes the only comprehensive history of early TCU football on the market. Written by FOW founding blogger Ezra Hood, the first section of the book traces the history of TCU and football as the two came together in the late 1890s and began to flourish in the first decade of the Twentieth Century.

To tell the story of TCU or of football in the late 1800s is to tell the story of a school and a sport that differ widely from the school and sport we know and love today. TCU, believe it or not, used to be a very Christian school. (Hard to believe, I know!) It prohibited dating-- so much so that Addison Clark expelled one student from walking across campus together with his fiancee. Daily chapel exercises were mandatory.

The board of trustees were initially very suspicious of football, and tried to ban it several times. For several years they succeeded in banning away games, and in 1900, any games at all. But the sport's popularity among the students won the day, and by the time Add-Ran College became known as Texas Christian University, football was here to stay. 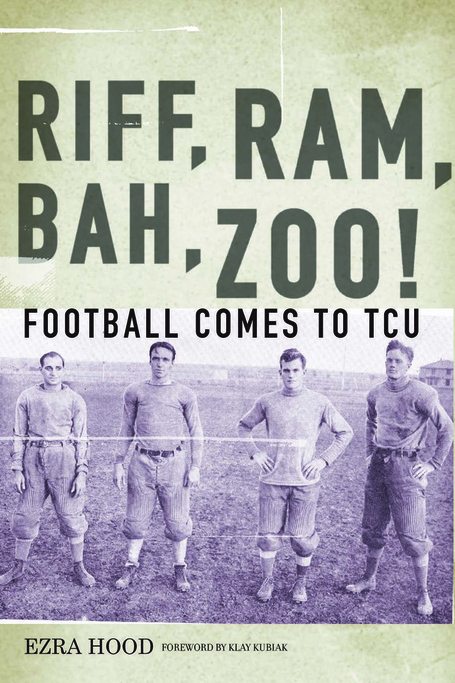 But "football" in 1901, and "football" today, almost are not even the same game. It's pretty well known that forward passing was illegal before 1906. But did you know that before then that a team needed only to advance the ball five yards for a first down? that teams could have 10 players in the backfield? that there was no neutral zone, or penalties for hurdling, unnecessary roughness? Even forward passing, new to the game in '06, was restricted beyond recognition. Passes had to cross the line of scrimmage off center at least five yards, could only be caught by an end, were turnovers if incomplete, and could not be caught in the endzone. Imagine football without touchdown passes! The ball, when passed out of bounds, belonged to whichever team recovered it first and was turned over if it touched an ineligible player.

So, yes, it was football, but it wasn't really football yet. And TCU did not win many games until it hired a good coach-- its first good one-- in 1905. E.J. Hyde, who played for Fielding Yost before becoming a lawyer in Dallas, is TCU's first great coach. TCU football was a joke before he arrived, and when he left three years later, it was a respectable, modern (for its day) team.

Not all of TCU's opponents were so respectable. From the book:

The following week, TCU began a weird attempt at a home-and-home series with Daniel Baker College, in Brownwood. For the first scheduled match, TCU travelled by train 120 miles west to Brownwood, arriving at two a.m. on Saturday, only to find themselves two miles from the lodging that Daniel Baker had arranged for them—a barn, with oat-filled pillows. The Skiff called it an "asinine environment." In similar fashion, the playing field, "ideal for grazing," was thick with vegetation, rent with ravines and wallows, surrounded by barbed wire, and had a cannon facing it from one goal to intimidate visitors. The mosquitoes were as big "as wolves" and just as poorly behaved as the townsfolk who rooted for the home team. They argued about the rules and may or may not have come to the game armed with knives and clubs to make sure no penalties were called against their team. In fact, Daniel Baker kicked one field goal while the officials were conferring, reported John Pyburn. Legitimate or not, the field goal was the game’s only score. Daniel Baker won four to zero. Not minding TCU's string of shutouts that Daniel Baker had pushed to five, The Skiff issued a challenge to Daniel Baker:

"When you come up to Waco, Brownwood, we will treat you upon the erroneous assumption that you are college men. We will establish you in a first-class hostelry, and show you the street-cars and give you an unmerciful drubbing at clean, straight, college football—but leave your bullying and violence at home, Daniel Baker, else there may be a new version of the ancient story of Daniel in the lions’ den."

Perhaps the threat was credible, because Daniel Bakerdid not show up. It forfeited the return game, giving as an excuse The Skiff's report of the game.

In the 18 years from Hyde’s arrival to TCU’s entry into the Southwest Conference, the Horned Frogs had a .526 winning percentage (82 wins, 61 losses, and 13 ties), and outscored their opponents 2050 points to 1649. Some of those good teams' leaders are still famous among the Frog faithful: Milton Daniel, Pete Wright, and Cy Perkins, primarily. But Howell Knight, A.J. "The Heavenly" Muse, T.B. "The Flying Terror" Gallaher, W.A. "Ambrosia" Martin, and Manley Thomas excelled as well. The first great line in TCU's history is the 1907 starters left end Albert Billingsly, left tackle M.C. Stewart, left guard J.O. Wallace, center William Massie, right guard Big John Pyburn, right tackle Pete Wright, and right end Manley Thomas. These fellows played both ways (because on those days everybody played both ways) and deserve a honored spot in every Horned Frogs' football heart.

Riff, Ram, Bah, Zoo! Football Comes to TCU! tells their stories, and many others.