If Big 12 Member Institutions Were My Little Pony Characters

The offseason is the perfect time for comparing your conferences teams to things, and sadly everyone and their mother has already done the Game of Thrones lists. HawkeyedFrog turns to his babysitting experience to create a list from a different series!

Share All sharing options for: If Big 12 Member Institutions Were My Little Pony Characters

If you've frequented other college sports blogs you've doubtlessly come across that prince of offseason content- the comparing teams in your conference to characters from your favorite television show. Wanting to get in on the fun, I sprung into action with a Game of Thrones character list, only to find that our friends over at Wide Right and Natty Light and Burnt Orange Nation had both already come up with their own Game of Thrones conference character lists.

Rather than crank out another list into the over saturated Game of thrones comparison market, I decided to pick another show. The issue facing me, however, is that I don't really watch much TV and the shows that I do watch would be problematic for list making- I'm sure I could make an argument for why Iowa State would be the Robin Williams guest character from Law and Order SVU- he relies entirely on out-thinking and out-bluffing the justice department, but the thought at the back of the mind is still "Yeah, but he also had some girl get molested" which is not something I'd wish associated with our friends in Ames.

The other shows that I watch with regularity are old Ninja Warrior episodes and the strangely fascinating Chinese dating show "If You Are the One"- but I don't think that an analysis of why Oklahoma is girl #13 who is always picked as the contestant's favorite at the beginning of the show, only to always turn her light off in the middle of the show (just like perpetual preseason top 5 OU dropping two games a season and/or blowing it in their bowl game, amirite?) would really captivate the readers.

That's pretty much all of the TV I know well enough to list... with the exception of My Little Pony.

As a frequent babysitter I'm exposed to a lot of kids shows and the new My Little Pony show has been by far the most enjoyable of the children's TV shows that come on here. Additionally, the fact that it's my girlfriend's niece's favorite (along with Winnie the Pooh) means I've seen all of the episodes several times and My Little Pony is riding a huge high of internet popularity right now which means it'll be easy to find images for the post. It's perfect!

Disclaimer: This post contains spoilers for all three seasons of My Little Pony: Friendship is Magic. If you don't want to be spoiled, don't read on!

Twilight Sparkle comes to Ponyville (the Big 12) to start the series, only to be met with difficulties when Nightmare Moon attacks and destroys the elements of harmony (our offensive weapons and defensive depth chart). By bringing the magic of defense to Ponyville, Twilight Sparkle hopes to enjoy a reign as princess, but will have to work to put some Casey Pachall-like mental issues to achieve it. The time to prove that TCU has what it takes to be a top tier program in the Big 12 is now though, as once you get locked into the role of a mid-tier Big 12 program it's a very hard label to shake. In other words the clock is ticking.

Most TCU pony moment: TCU's reaction on being invited to the Big 12- the little ponies are Mountain West teams.

A whole lot of flash and explosions and a giant sense of self worth, the great and powerful Trixie is Twilight Sparkle's nemesis, and was responsible for temporarily banishing Twilight Sparkle from Ponyville (to the WAC), only for Twilight to come back more powerful than before and humiliate Trixie. Trixie knows a large number of offensive tricks, but is lacking on the defensive side of things which prevents her from achieving true greatness. Much like Trixie, Baylor has kicked up a huge fuss heading into Ponyville this year, claiming great deeds in beating an Ursa Major (#1 Kansas State) but nobody living has ever seen a time when Trixie was the most powerful unicorn in Ponyville, much less all of Equestria. 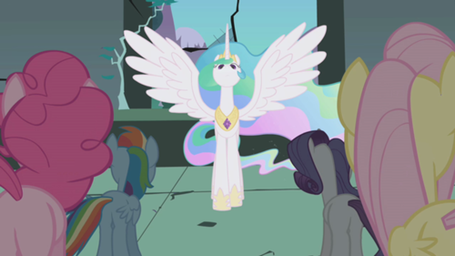 There's no debate about who the most important pony in Equestria is, Princess Celestia rules over the land with an iron hoof and would throw the entire realm into chaos if she decided to leave it behind for another. Celestia is perfectly content ruling over her own kingdom rather than venture into other realms though, which benefits everyone under her rule- even if some of her subjects do resent her for it. Celestia is always venerated as one of the most powerful beings in the world, but when it's come down to actual showdowns it's been a long time (2005) since she actually showed all the power that you'd expect, and has received beatings from both Discord and the Changeling Queen since the last time she's shown some real power (2009). Still, every time she comes on screen you're expecting something great until she disappoints again.

Most Texas pony moment: How Longhorns actually view their program. 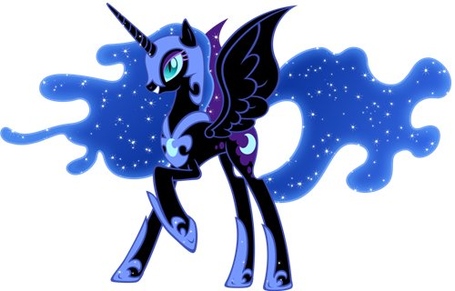 Princess Luna lay dormant for years and years as the land of Equestria went on without even remembering she existed, much like Kansas State in the pre-Bill Snyder years. Then the stars aided in her escape and she emerged as the evil Nightmare Moon, using dark magic to banish the more powerful Celestia (over and over again in the case of K-State and Texas) and claim ownership over the conference. Then Nightmare Moon was defeated, Bill Snyder retired and Luna came back much smaller in Ron Prince form. These days Luna has regained some of her old power and is looking much more imposing and capable of ruling over the other ponies of the conference from time to time, but there is still reason to doubt that she'll be top mare for any extended period of time. 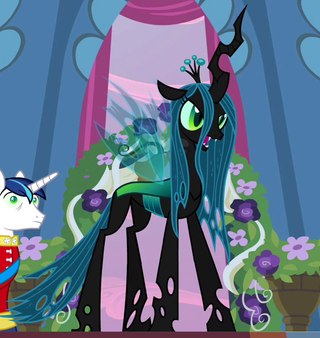 Queen of a race of insect-like monsters, Chrysalis takes on the form of a princess that is known and loved throughout Equestria and uses the realms own power against it- much like Oklahoma comes into Texas and steals off north of the Red River with some of the best recruits. Without this power Chrysalis would be weak, as Oklahoma schools don't produce the love energy (talented players) that she needs to achieve great power. Nothing gives the changeling queen a rush quite like humiliating Celestia though, and she certainly delivers on that desire more often than not. 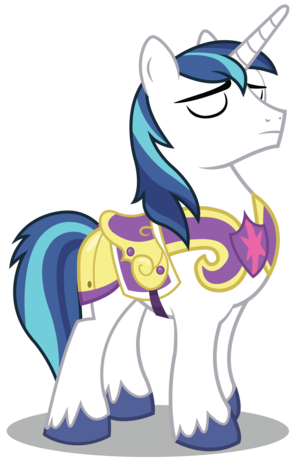 Shining Armor is a capable pony, probably the most capable male pony on the show (Okie State would have been a girl like the rest of us, but Mike Gundy ranted about being a man once again and I didn't have the patience to argue the point) but despite all of that capability he has a problem. The Changeling Queen absolutely owns him. He tries to fight back, and on occasion is able to repel her, but by and large the Queen dominates his life, while Chrysalis is actually a lot more focused on overthrowing Celestia. Finally, after the queen has been expelled and Shining Armor is looking like he could be the one to defeat the darkness (SEC domination), he gets blocked out from even having a chance to help.

Most Oklahoma State Pony moment: Blocked out from ending the darkness. 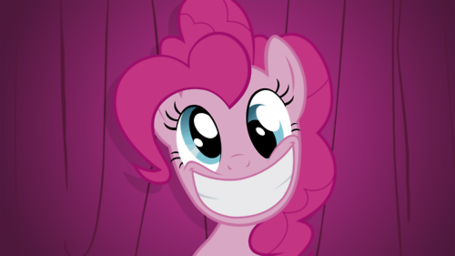 Nobody takes Pinkie Pie seriously. She's hyperactive, isn't the most physically imposing pony and her modest upbringing on a farm makes people smile as they see her coming into town. Still, nobody loves playing pranks quite like Pinkie Pie, and the one she played on Oklahoma State was an all-timer. Iowa State is everyone's second favorite Big 12 team and everyone is usually happy when the Cyclones are coming to town to take a beating, but about once a year the Pinkie Pie in Iowa State kicks up and pranks the hell out of some unsuspecting team. Everyone in the Big 12 should always be prepared for a massive Pinkie Pie swarm when you least expect it.

Most Iowa State Pony moment- You're sitting there, enjoying your season, minding your own business... then suddenly Iowa State. 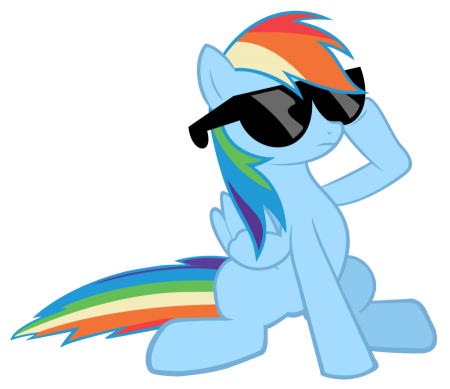 After transitioning from Tommy Tuberville to the bro-tastic Kliff Kingsbury, Texas Tech is definitely of the opinion that they are at least 20% cooler, but the parallels run deeper than that. Rainbow Dash is one of the best high fliers around, dropping Sonic Rainbooms on poor folks left and right, but Dash has a bit of a problem with success. Feeling a bit too good about themselves a bit too fast, both Dash and Tech have a habit of dropping the ball right after a big win. Remember the Oklahoma game after Tech upset #1 Texas in Lubbock? Or the beatdowns at the hands of K-State and Oklahoma State after thumping #5 West Virginia? Nothing ruins Tech's good time quite like... actually doing something great. 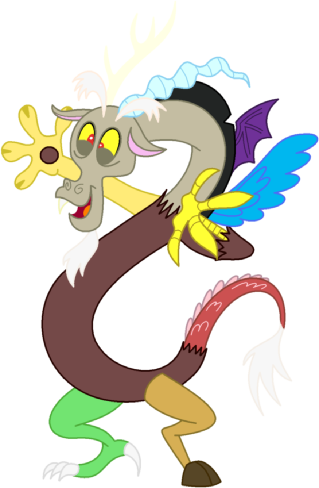 Discord is an amalgamation of many different animals that don't really fit in quite perfectly together, much like West Virginia in the very central United State centric Big 12 conference. Still, Discord has some incredibly powerful magic which can turn all of Ponyville on its head when he's on his game, and he was quite the imposing specimen in the early part of his two-part special. However, much like West Virginia, his utter disregard for defending himself resulted in him being blasted harder than he was expecting. Discord has now lost a good deal of his powers and the other ponies of the realm are trying to rehab him into being a productive member of society, but you never can tell when he might decide to drop a little chaos on you. 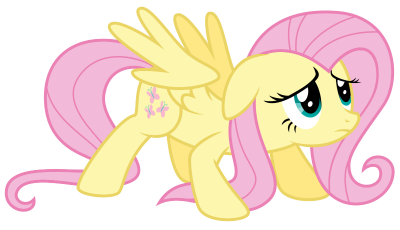 Fluttershy is a very nice pony, but one that has very different priorities to all the other ponies in town. Fluttershy loves the little animals of the world, and hates direct confrontation- and football is a game of nothing but direct confrontation. As a result, Fluttershy, much like Kansas fans, has very little interest in football or violence of any kind. Still, she tries her best and was downright assertive in the past, but now she's just waiting out the adventures every other pony is going on and focusing her attention on her animal friends, who will dominate the court come basketball season.

Most Kansas pony moment: Trying to teach Kansas fans how to cheer at football games.

Thank goodness football season is right around the corner.