The Frogs' toughest test this season may be the first one: LSU. Frogs O' War gives you the most detailed look at the Tigers available on the web, offense first.

Share All sharing options for: 2013 LSU Football Preview: The Offense

It's (almost) game week! To celebrate (or perhaps to dampen the celebration) Frogs O' War brings you the most in depth look at the LSU Tigers known to exist in captivity. It's a little sobering; the Bayou Bengals are really talented, and generally pretty dang experienced on offense. (Taste of things to come: the picture ain't much better on defense.)

Previewing LSU's offense before the season begins is nearly pure speculation. New coordinator Cam Cameron has said the Tigers will use pro sets. "For a lot of teams we play, we'll be the first team they see that lines up with a quarterback under center and a running back following a fullback through the hole... then we are going to take our shots over the top." The team is focused on on finishing games in the spring. "We’re gong to give more time to the four-minute scenario," he said, "Where you get the lead with four minutes left in the game and you get the opportunity to keep it by getting first downs."

This offseason one of ESPN's SEC bloggers thought LSU's strongest position was offensive line. That was before the projected starters lost their only senior, Josh Williford, due to concussions. The unit has some question marks-- not talent-wise, of course, but experience and unit-coordination-wise. Sound familiar?

Left tackle junior La'el Collins (who has trimmed down to 310 pounds) spent last season lining up at left guard, now replaces last year's starter Josh Dworaczyk. "I feel like a complete offensive lineman," Collins said. "I can still move inside and play guard. It's still in me and it's easy to me. Being able to play tackle, that's become easy to me, so it's a great transition." Vadal Alexander, who moved to left guard in mid camp replacing Josh Williford, whose football career likely is over due to concussions. "As long I've been here, I've always known there's a chance I'd play [guard]," said Alexander, who started at right tackle last season. "We try to help each other, so, I'll be like, La'el, 'Remember to do this' and La'el will be like, 'Hey, watch for this.'"

LSU saw fairly stiff competition between junior transfer Elliott Porter and freshman Ethan Pocic at center. Porter had some trouble in the spring with errant snaps. "I can tell you this, in the next six practices, we’ll get a lot of center-quarterback exchanges," said Miles during the spring. Porter held off the challenge from the freshman, but the future is clearly Pocic's. He'll have his hands full with Davion Pierson, Chucky Hunter, Jon Lewis, David Johnson, or Terrell Lathan. The right side will be sophomore Trai Turner, started seven games last year (knockdowns in almost a tenth of his 559 snaps last season) and redshirt freshman Jerald Hawkins has been pushed into a starting role at tackle, perhaps a year early, with the injury to Josh Williford. "We really think that Hawkins has had as quality a camp to this point as anybody," Miles said.

While Collins, Alexander and Turner give the Tigers three returning starters, only Turner is back at the position he started last year. The matchups of freshman Hawkins against sophomore Greg McFarland, and Porter against the Frogs' interior defensive linemen, are some of the few areas on the field August 31 where TCU probably plainly will have an advantage.

Returning starting QB Zach Mettenberger is a focus of the new offense, led by Cam Cameron, freshly in from the pros. "There were a lot of chances [downfield] that we had last year that we missed," Mettenberger said. "You can trust me when I say that that's been one of our main priorities in getting better at this offseason." Steve Kragthorpe (formerly LSU's OC and QB's coach, and still on staff) says Cameron came in with "a seamless transition." The new coordinator blended new terminology with the old terms to help make the players comfortable.

Frogs fans hope Zach Mettenberger plays as meh as he did last year. Gary Patterson will have none of it. "If anybody thinks that Mettenberger is not a very good quarterback then they’re sadly mistaken. They won nine or ten games in the SEC." This contrasts considerably with TCU's starting quarterback; Patterson isn't the only one who's noticed. "Zach will really benefit from having played 13 games last year," Kragthorpe said. 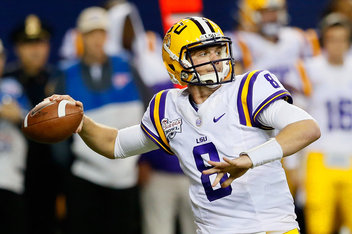 Cameron says Mettenberger shouldn't try to look like the genius behind an offensive juggernaut's success. "Personally, I think that's why some teams get in trouble," Cameron said. "They have guys trying to make their mark within a team." Frog fans really hope Mettenberger tries too hard in the opener, and gets acquainted with Sam Carter, Elisha Olabode, Chris Hackett, and Jason Verrett.

Halfway through camp, Miles said Cam Cameron had helped Mettenberger smoothe out some of his "real mechanical issues... When you hear the decision and how it’s to be made over and over and over, it starts to sink in. There was a point in time early in camp he was a little rusty and you could tell it, but he’s really caught speed lately."

Mettenberger made noticeable improvement in the last five games of the season compared with the first seven. We don't pretend to be the first to notice that the improvement coincided with the emergence of all-world receiver recruit Jarvis Landry.

"Zach will really benefit from having played 13 games last year."

Landry and Odell Beckham, juniors this year, and seniors Kadron Boone and James Wright were Mettenberger's favorite targets last year. All return. Jarvis Landry is the star (Mettenberger through to Landry a quarter of the time; to Beckham a fifth.) Redshirt freshman Travin Dural may have played his way onto the first team when it uses more than a pair of receivers; while LSU's tallest receiver, JUCO transfer Quantavius Leslie (6-4, 190), managed to pass an algebra class (apparently it was a close call) and make it to campus for fall drills, but did not make it onto the two-deep.

With the change in coordinators it may or may not matter, but LSU rarely threw to tight ends last season. Runningback Spencer Ware, now a Seattle Seahawk, did get a couple of passes thrown his way out of the backfield every game. Runningback and probationer Jeremy Hill had the highest catch rate of any player on the team last year, but that also may not (and for Pete's sake ought not) matter for the season opener.

So let's talk about runningbacks. And spare me the sanctimony about second chances or consent the team vote or however one might try and cloak the felonious behavior of Jeremy Hill. In a sane society he'd be cooling his heels in the pokey, contemplating the meaning of "under age" and "coercion" and "battery." 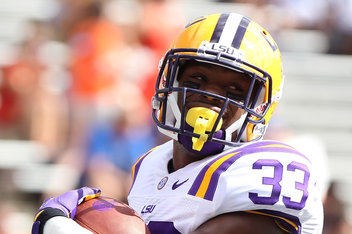 But we're talking about LSU and football, where sanity rarely interlopes. And so Gary Patterson probably wakes with night sweats after nightmares of Harvey Unga, Zach Line, Montee Ball, and Le'Veon Bell gashing his defense for first down after first down... The next Frog opponent who might do that to TCU's typically-stingy defense is sophomore Jeremy Hill, 6-2, 235 pounds. Hill came on very strong in the second half of 2012, and, given playing time, may be the best back in the SEC.

And he may be suspended for the season opener. Or he may not be ready for it. Early in practice, Les Miles said, "He's rusty as heck... he didn't look anything like the Jeremy Hill we saw before. He better get back to practice if he expects to play at all."

His backups are no slouches. "There's no fear," says senior Alfred Blue (6-2, 220) after a year rehabbing a torn ACL. "I just go out there and what happens, happens. Physically, I'm there. I'm 100 percent." His coach agrees.

And his backup? That's junior Kenny Hilliard. "I'm 230 pounds," he said at the beginning of camp. Junior Terrence Magee (a slight 5-9, 212) has drawn praise in camp.

Add a fullback (the veterans are J.C. Copeland and Connor Neighbors) for the new coordinator. Neither Hill, Blue, nor Hilliard averaged less than 5.3 yards per carry last season (Blue had the fewest carries, 40). Hill may be the star, but the Tigers have one of few backfields in the country that is unambiguously better than TCU's.

Colby Delahoussaye won the place-kicking job from incumbant kicker James Hairston. Jamie Keehn (another Austrailian) will punt. This fall Miles said Keehn "was extremely sharp dropping the ball (inside the 20)."

Which matchups do the Frogs like? They like ends James McFarland or Matt Anderson (remember him? The scoop: he's fast) lining up against the redshirt freshman Jerald Hawkins. In fact, they like all of their interior defensive linemen challenging center Elliott Porter. There's some serious momentum coming from the backfield behind Porter, so plugging the A-gaps and getting behind the line will be a big deal on August 31st. 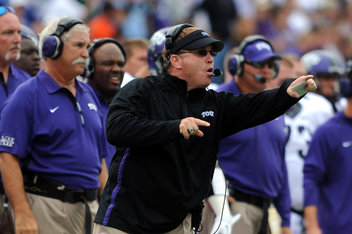 What worries me-- and it should worry you, too-- is LSU's runningbacks against TCU's linebackers. TCU hasn't handled big, fast, physical backs very well, even in the Dalton years. And LSU's got lots of 'em. I look for LSU to try and pound the ball against TCU-- fullbacks, pulling guards, tight ends in the mix, the whole bit-- and go to the air only if that doesn't work. You can bet the Tigers have watched the Rose Bowl, and ask themselves (with Wisconsin fans everywhere) why didn't the Badgers just run it?