Frogs O' War takes a detailed look at the defense the Horned Frogs will line up against at JerryWorld on Saturday. It's got all the pieces of a smothering SEC defense, but not yet the experience. Will inexperience trump its talent come gameday?

Share All sharing options for: 2013 LSU Football Preview: The Defense

Frogs O' War took a sobering look at LSU's offense a few days ago, in preparation for LSU's opening tilt with TCU. Today: the the Tiger's defense.

LSU's defense is probably not in as good a shape as its offense. It has a bona fide star on each level, but also some potential problems at each level. Of course, if defensive coordinator John Chavis and company do what they do best in a slightly compressed time frame-- develop highly gifted athletes into transcendant defensive players-- than LSU's defense will be just fine, and TCU probably isn't going to get much traction in JerryWorld on Saturday. John Chavis says, "We don’t have any choice but to grow up in a hurry. I can promise you we’re not going to fold up our tents and say, ‘Come get us.’ "We’re going to get there. It may not happen overnight, but we’re going to be a good defense." The question for TCU is when is overnight?

But it's probably asking too much from Chavis to field a top-grade LSU defense on the opening day of a season after he sent most of his first team into the NFL. Those departed players led a squad that finished 8th nationally in total defense, 12th in scoring defense, 11th in pass efficiency defense, 28th in pass defense, 12th in interceptions, 12th in third-down conversion defense, 19th in sacks made, 22nd in tackles for loss, and 27th in first down defense. It was a stellar year in Baton Rouge. The conventional wisdom that those numbers have to slip at least a little with so much starting experience gone is difficult to dismiss out of hand. Chavis talks his team up, "You’ve got to have those guys ready, and we will be." 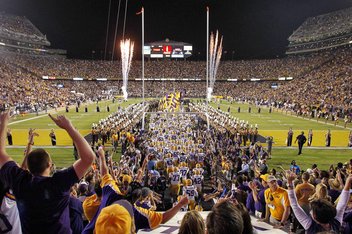 The players LSU is probably going to miss the most in early 2013 are defensive ends Barkevious Mingo and Sam Montgomery. Their backups also are gone, and the new starts will be junior Jermauria Rasco and sophomore Danielle Hunter. While it's true these two players were third-stringers last season, Miles is talking both of these formerly-third-stringers up: "Jermauria Rasco, in my opinion, is going to be a guy that can step right in there and play just as well as any of the guys we'll lose to the NFL draft," Miles said, and Hunter "has all of the ability that we would be comfortable with at the defensive end spot." Yes, they played behind all-SEC players; but one wonders if they were playing lower on the depthchart last season for a reason. Jordan Allen, recovered from a torn ACL, is one backup.

LSU's bona fide star on its defensive line is inside, already laden with a nickname. Anthony "The Freak" Johnson has a softer side that makes for easy sideline reporting (he sings, cooks, and keeps a diary), but on the field he's the next line monster in a conference known for line monsters. Johnson is the kind of player the SEC is known for: he's 6-3, about 300 pounds, and runs a 4.7. Some services listed him as the second most valuable recruit in 2011, and after rotating in substantially last season at tackle, he is anxious to shine as a starter. "I've been waiting for this moment for a long time. I want to take a lead role and show my teammates that I'm here for them and I'm ready to play for them, along with the coaches."

John Chavis said of Johnson and Ego Ferguson, the other interior lineman for this year's 4-3 Tiger front: "I don't think we could have two better guys to build this defense around, we won't miss a beat there." Not missing a beat would be pretty impressive. The departed linemen for LSU tallied almost 40 tackles per loss, 22 sacks, and 8 pass breakups last season. That's a solid stat line (not unworldly for six players, but solid). Outside of the stats, LSU fielded one of the most suffocating lines to play against in the nation. Good news for Tiger fans (meaning, of course, "bad news for Frog fans") is that the returners are experienced, talented, and in Johnson's case, probably headed for a pretty spectacular season with increased snaps. 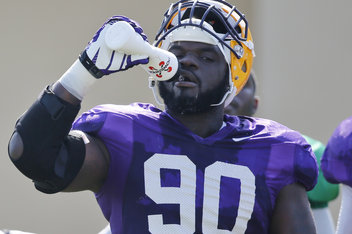 Nowhere does LSU contrast more sharply with TCU than its depth and talent at linebacker. The star Tiger at the next level is senior linebacker Lamin Barrow, who probably will emerge from Kevin Minter's All-American shadow by casting such a shadow of his own in 2013 before collecting a fine signing bonus in the League before summer. He's surrounded by young rising talent that gathered significant experience last season as freshmen. Senior Tajh Jones (ok, not young returning talent there) is back after academic disqualification last season. Sophomores Kwon Alexander, Deion Jones, and Lamar Louis were the third through fifth leading tacklers among linebackers for LSU last season, but junior D.J. Welter probably starts ahead of Louis. "Welter has had a very strong fall camp," Miles said of the junior. "He’s improved and improved. He realized that he needs to play with passion and he does and it’s fun. To me, it’s kind of catchy." Miles also gave Welter the kind of compliment that would warm Gary Patterson's heart: "He's got more attention to detail." The coach says further, "I think our linebacking corps is kind of enjoying the luxury of big plays and the enjoyment of contact. I think the group is just a really improved group."

So it's Barrow at weak, Welter at middle, and Tajh Jones at strongside. With ample substitution from Alexander, Deion Jones, and Louis. Remember Duke Riley-- whom TCU coveted as a recruit (and, let's be honest: still does?) He's probably not going to play defense against TCU this year, so stocked is the two-deep ahead of him. Suffice it to say that at TCU he'd probably have started.

"I’ve never been around a scrimmage where we’ve moved the football as well as this... But I really thought the first defense played well."- Head Coach Les Miles

There're a couple of sophomore Jalens at cornerback: Jalen Mills reminds me of Elisha Olabode in that he played (started, actually) as a true freshman at corner for the Tigers, tallying over 47 tackles, 5 pass breakups, and a couple of interceptions. Jalen Collins played backup in the secondary and had 22 tackles, 6 pass breakups, and a couple of interceptions. True freshman Tre'Davious White is one backup. But the current star of the secondary-- tasked with replacing last year's star, All-American and first round draftee Eric Reid-- is senior Craig Loston.

Junior Ronald Martin appears to have pinned down the second safety spot, but the competition with Corey Thompson was close. "It’s very close," Barrow said of the competition for the second safety spot. "It’s two athletic guys. It’s two physical guys. It’s two smart guys. So, it’s going to be close. I couldn’t tell who is going to start, but those guys are going to play a lot. We need them to play a lot."

As for matchups, there probably only one place where TCU has an edge over any part of the LSU defense, on paper, and that's at defensive end. TCU tackles Aviante Collins and Big V aren't going to be blown away by LSU's defensive ends. I rather expect TCU's players to win those battles, generally. I expect the Frogs to try and capitalize on this with end runs, and plays with Trevone Boykin aimed at the ends. 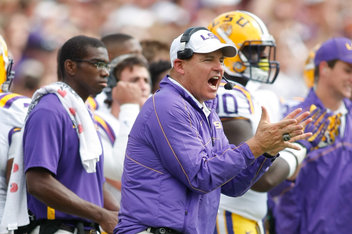 TCU's runningbacks-- whom we expect to be excellent-- are going to run into a terrific interior d-line, and excellent linebackers. It's strength-on-strength up the middle. I also expect TCU to target cornerback Jalen Collins early and see if the Horned Frog outside receivers can get behind him. I don't think there's much doubt that Pachall can put the ball there, but it does remain a question whether or not TCU can also put a player there. If the play-action can fool a corner or a linebacker, the Horned Frogs have the horses to punish LSU.

The word out of fall camp in the bayous is couched in native coach-speak, so it's difficult to tell whether the defense is growing up as quickly as Miles and Chavis want. Truth is, the coaches themselves probably don't know exactly what to expect on August 31. But there're some hints: after one mid-camp scrimmage the head coach said, "Our defense was very difficult to move against. It was mostly ones versus twos. There were times where we tested the ones versus the ones, and it was a very competitive go."

Coordinator John Chavis agrees that the first team defense is a good one. "I think the first 11 we put on the field will be as good as any in the country. The thing we’ve got to do is build that depth." Earlier this fall he let his guard down a little, falling back on the "don't you know who we are?" argument when he said, "We’ve recruited well enough to have expectations. Tradition doesn’t graduate. It’s still here."

That remains to be seen. But Coach Miles probably did the best coach speaking of all when he said, in the same sentence, two totally opposite things about his defense, leading one to suspect that this year's crew isn't going to live up to last year's top-12 finish. "I’ve never been around a scrimmage where we’ve moved the football as well as this. But I really thought the first defense played well."