Before football season starts in earnest, it's time for a last bit of silliness. Join us as we take a trip into the Frogs O' War War Room where the FoW staff and a few guests prepare to ensure a victory against the LSU tigers

Football season is upon us, and as the crew is getting geared up for all of your LSU analyzing needs, I thought it would be a good time to take a step back for a moment.  With all the importance we put on football season, it's easy to forget that the games we're playing are supposed to be fun, and when you think about it, emotionally living and dying based on the flight of a football through the air is kind of ridiculous.  Still when the season kicks off that perspective is entirely lost, and we will be unable to enjoy our Saturdays (or Thursdays in some cases) without knowing that a TCU victory was achieved earlier in the day.  To celebrate this last week before our lives get serious once again, I invite you to join me as we enter the Frogs O' War War Room (twice the war of any other room) in preparation for: Attack on Tigers. 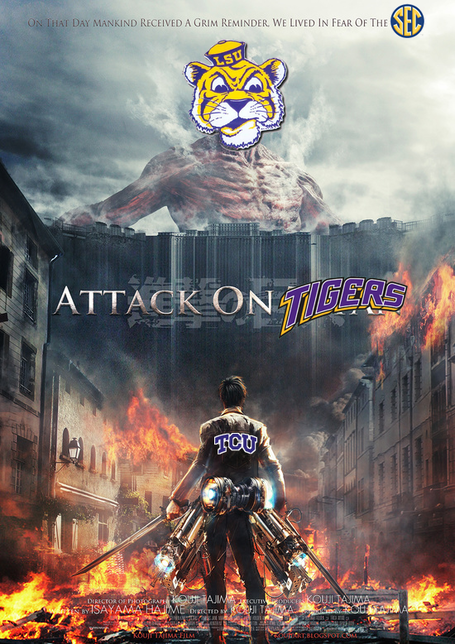 Frogs O' War War Room: Fungo Frog, Jamie Plunkett and HawkeyedFrog have gathered to discuss the plan for LSU week on the site- and to enact plans to ensure that TCU beats LSU

FungoFrog: So Hawk, have you done the film analysis post for LSU like I asked you to?

HawkeyedFrog: Not yet, Fungo, Super Frog told me he'd hire some outside help to get an in depth view of the mindset of an SEC coach.

Jamie Plunkett: You hired someone?  You know we have a monthly budget of $50.

: Hi guys, long time no see!  Great to be back in purple,

FungoFrog: Super Frog... Am I to understand that instead of just having Hawk watch the tape on LSU you went out and hired Coach Fran?

: He didn't want to leave Texas State in the middle of spring practice, but for $20 and a coupon for a free Grand Slam at Denny's he came running.  He's also the only source we have that has actually played against the SEC.

Jamie: How is he going to help us?  Coach Patterson has played against the SEC before.

HawkeyedFrog: Now Jamie, we all know Vandy doesn't count.  All right coach, what have you got for us?

: LSU has a ton of athletes there's no denying it, but they're a team that will never reach its real potential.  When I was the coach at Alabama we beat them 31-0, so follow my plans and you'll do the same I'm sure.  I wouldn't expect anything special out of that coach of theirs, Nick Saban.

: Now what you guys need to do to beat LSU is to do what I did: Run the option to the short side of the field.  Don't try to get cute with those multiple wide receiver looks, however many scholarship tailbacks you have is how many should be on the field at once.  You get one receiver to catch your passes on third and long and a tight end in there to block.  That's how you win in a league like the SEC. *phone rings* Excuse me, boys, I've got to take this.

Jamie: Does he seriously not know what's happened in college football in the past decade?

Hawkeyedfrog: Coaching at Alabama and A&M back to back must do horrifying things to one's mind.

: Great insight coach.  What else would you recommend we do?

: Actually guys, I've got to run- Virginia Tech just offered me $25 and three Virginia Tech sweatshirts if I help them prepare for Alabama.  Don't worry though, you guys can read the transcripts on the CoachFran.com members site, $20 a month membership.  Bet big on the Hokies covering the spread, Alabama will never stop the option to the short side of the field.  Who's their coach anyway?

*Coach Fran exits, pulling a Virginia Tech hat out of a sack he drags beside him as he goes*

FungoFrog: Well that was... interesting.  We'll be sure to pass that insight along to coach Patterson, Super Frog.  Do we have any other ideas for how to actually beat LSU?

HawkeyedFrog: Poison the grass at Cowboy Stadium?  If coach Miles has a fit on the sideline he won't be able to call any trick plays.

Jamie: Hawk, we want him to be calling for deep passes on fourth and three.  Anything that gets him away from the run game will only help us in the long run.

FungoFrog: If only there were some way to cripple the LSU running game.  Anything coming to mind on how to slow down Jeremy Hill, gentlemen?

HawkeyedFrog: Stack the box and hope that Zach Mettenberger can't beat us deep, I'd say.

Jamie: Unleash Devonte on them and put them in long yardage situations where they can't run.

: Surround him with haters.

FungoFrog: So if you surround him with haters what's going to happen?  He won't be able to run the football anymore?

: Something like that.  Just leave Jeremy Hill to me, gentlemen.  This meeting is adjourned.

FungoFrog: I can't believe he actually did it.

HawkeyedFrog: There must be great powers in haters.

FungoFrog: At least now that he's violated his probation there's no way he'll suit up to play against us.  A judge would have to give him the meekest of slaps on the wrist.

HawkeyedFrog: And then Les Miles would have to find some way to deflect blame for the decision so that he can keep his reputation as a disciplinarian.

Jamie: The only problem is if any of this gets traced back to us we could be in serious trouble with the LSU blogging community.  If they check the transcripts Coach Fran posts, we could be sunk.

FungoFrog: We need something to distract people and make them think that we're not a threat until this dies down.

HawkeyedFrog: Gentlemen, I believe I have just the thing.  Ponies.

FungoFrog: What the hell do ponies have to do with TCU sports?  Or Big 12 sports?  Or any sports?

HawkeyedFrog: They're really popular, people like reading about them.

FungoFrog: I don't have any other ideas, so I guess we'll give the Pony thing a try, but I really think you're way off base here, Hawk.  Nobody is going to read or comment on some post about My Little Pony.

HawkeyedFrog: We'll just see about that.