Despite a poor showing against Kansas, the Frogs still remain ahead of Baylor in the College Football Playoff Rankings.

Share All sharing options for: TCU Horned Frogs Drop to No. 5 In College Football Playoff Rankings

TCU dropped to the No. 5 spot in the College Football Playoff Rankings after arguably their poorest outing of the season, in a 34-30 win over lowly Kansas.

Alabama overtook the No. 1 spot, after defeating Mississippi State 25-20 in Tuscaloosa. Florida State hung on to the No. 3 spot despite struggling with Miami similarly to how TCU struggled to put away Kansas.

Kansas State moved to No. 12 coming out of their bye week.

Baylor remained No. 7 despite a loss from Arizona State, who fell to No. 13 after losing to Oregon State. They were jumped by Ohio State, who, after beating still-ranked No. 25 Minnesota, jumped the idle Bears.

If the playoffs were to start today, the four teams in would be Alabama, Oregon, Florida State and Mississippi State. Both Baylor and TCU should be frustrated with Mississippi State remaining in the No. 4 slot, because their non-conference schedule is arguably worse than Baylor's. It seems there's an SEC bias coming into play.

However, when it comes to it, should TCU and Baylor both win out, they'll be able to hold the title of Big 12 Champion, while Mississippi State will not be a conference champion. 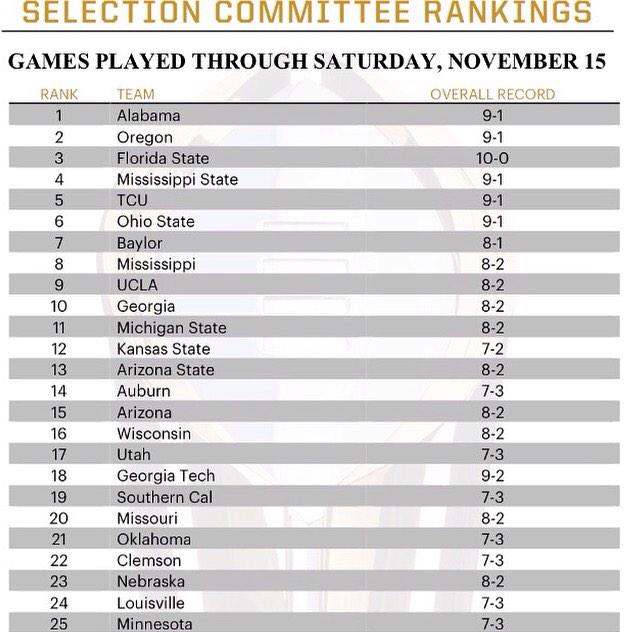