The Case For Trevone Boykin

Share All sharing options for: The Case For Trevone Boykin

As I said in my piece two weeks ago, I'm not ready to completely give up on Boykin. He can certainly make things look worse than they actually are; immediately rolling out, his awkward helicopter spins, and his liberal ball control usually result in yelling at the TV. But at the end of the day, these things can be fixed with an improved line, new offensive coordinators, and who knows what will happen when we actually start throwing the Tight End into the mix.

I Repeat, Will The Real Trevone Boykin Please Stand Up?

Boykin was thrown into the fire against Iowa State after Casey Pachall's DWI. Boykin had the first game jitters, but then again he only had two days to prepare for the starting role.

Then the Baylor game happened the next week. Debuting the Purple Chrome-Domes, Boykin lead TCU to a 49-21 whopping in their reignited rivalry against the Bears. Boykin looked incredible in that game, completing 22 of his 30 passes for 261 yards and four touchdowns. His versatility and speed were also on display as he rushed for 56 yards and one touchdown. But it wasn't so much the stats that were impressive. It was his overall demeanor. He was confident, poised, and dominant. His only rushing score looked like something out of the Johnny Manziel playbook as he completely demolished the Baylor defender. Boykin looked fluid, confident, and had the poise of a guy who'd been starting for two or three years. If this is the real Trevone Boykin, the possibilities are near limitless.

The triple overtime loss to Texas Tech exhausted the team and fans alike. The game was back and forth throughout, but it looked like Tech was going to pull away late in the fourth quarter. That was until Boykin hit LaDarius Brown on a 60 yard bomb and brought the Frogs within three points. The onside kick failed, but TCU forced Tech to punt and Oberkrom knocked one between the uprights to take the game into overtime. The game came out in Tech's favor and Boykin was the scapegoat - A brand he has worn since.

2013 was more of the same. Sure, we all really wanted Casey to come back and do great things in 2013, but the stats speak for themselves. Pachall had 6 touchdowns and 10 interceptions whereas Boykin split interceptions and touchdowns at seven a piece, and had a better completion percentage and QB-Rating than Pachall in 2013. 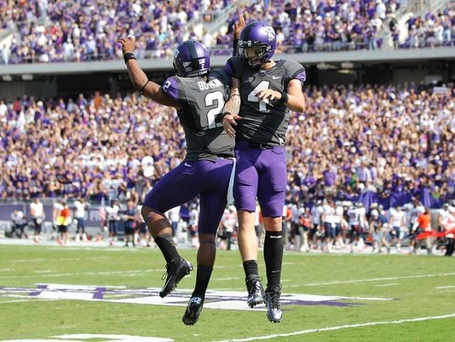 Boykin returned under similar circumstances as he did in 2012. The kid who we briefly praised as he kept us bowl eligible and out of obscurity, but who we were so quick to throw to the curb when Pachall announced he'd be returning last January. As good great as Pachall was, the cold truth is that he never quite saw the talent that Boykin has. Yes, he did see an RGIII Baylor and Boise State...but they weren't sandwiched between Oklahoma, Texas, and Kansas State. The bottom line is that we were spoiled as fans. We didn't even warm up to Dalton until midway through the Rose Bowl season. Yes...his senior year. Why? Because he lost in the Fiesta Bowl of course. Logical.

Here's where I'm really going to get shit. There hasn't been another quarterback in TCU history that's played the same week-to-week as Boykin. Dalton played great Utah and BYU teams, but the MWC was certainly not the Big 12. If you compare Boykin and Dalton's first years, Boykin comes out ahead, and considering the teams he was doing it against speaks volumes.

The most dangerous answer for the looming Quarterback battle in 2014 is to put stock in a kid without ever having seen him play.

I don't doubt the potential of the other likely candidates - Tyler Matthews or Foster Sawyer - but there's a lot of danger in electing a quarterback simply because he's "Not Boykin".

For Tyler Matthews, we probably saw him throw all of three or four times the entire season. The offensive line was bad, but Patterson's also not an idiot. If there were a battle to be won, Matthews would've been in the mix for it. With a redshirt burned and plenty of time to get work in during practice, if Matthews was as good as everyone wants him to be, he would've played over Boykin.

Speaking of counting chickens before they hatch, how about Foster Sawyer. The kid who draws a lot of Andy Dalton comparisons, both on and off the field, may very well be the most promising candidate in the mix, but why throw a 19 year old kid into the fire when you probably don't have to.

If the season started today, the risks of starting Sawyer would outweigh the positives. It's not on Sawyer either. Like I said, Sawyer is already being hailed as the next great TCU quarterback. He knows it. We know it. These expectations are already a heavy load on Sawyer's shoulders, and for a kid who's not even at school yet, it's not good for anyone. It echoes Ryan Perriloux and we all know what happened, or better yet didn't happen with him. 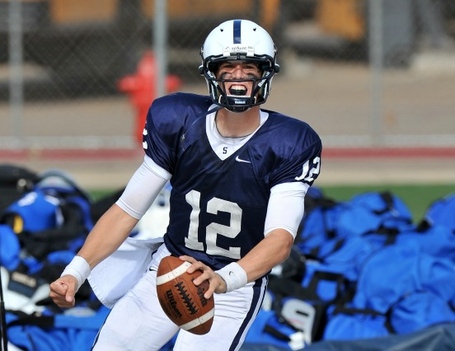 Sawyer doesn't come in following Casey Pachall, like Pachall came in following Andy Dalton and was expected to continue the greatness, Sawyer is expected to completely rebuild the greatness. I don't care if you're Jameis Winston, pressure like that should never fall on an 18/19 year old kid. Winston, even though he was a freshman, also had the advantage of playing baseball in the spring, so he already had some sense of athletic maturity.

But as we are being proactive in reestablishing the offensive identity, it's still going to take some time. The line will be improved, but it won't be perfect.

Everything In Its Right Place

I'm not going to harp on the importance of the offensive line too too much, but if the line comes together and improves from a dismal 2013 season, a Boykin-led offense could really look nice.

The confident, Baylor-Boykin is the best Boykin. But even the Boykin from the Texas game in 2012, The Game-Manager Boykin, was brilliant. Neither offense looked particularly pretty, but Boykin was as good as he needed to be...rushing for a team high of 70 yards. He didn't even break 100 yards passing...but then again he only passed nine times (Insert Ed Rooney voice). But as the commander of the Frogs' offense, he did everything perfectly. He was exactly the quarterback TCU needed him to be that game.

The loss of LaDarius Brown will hurt in 2014, but there are simply too many good weapons on the field for TCU to not score points. A lot of points. While we'll be sans Brown, we will have Josh Doctson. Doctson, who's been an absolute gift, probably has his head on straight more than anyone on the offense other than Boykin. With this in mind, Boykin and Doctson together could have the dynamic of a McCoy-Shipley (Colt and Jordan...sad I have to specify), Boyd-Watkins, or Manziel-Evans, in that not only are they extremely talented, they are also the emotional leaders of their offense.

In addition to JD, you also have the other receivers JaJaun Story, Kolby Listenbee, Ty Slanina, and David Porter. You also have Brandon Carter, and even though he may be more of an absurdist than Rust Cohle, he has more natural talent than anyone on the field.

At the end of the day I trust GP, Meacham and Cumbie. If Sawyer's the guy, then I'm on board. I just don't think Boykin should be so easily dismissed. I love Boykin in the slot, but if there isn't a confident guy throwing to him, what's the point? It's like owning a muscle car, but not knowing how to drive stick.

Boykin's on the field angst can be fixed. I'm not an expert on cars, but going back to the muscle car analogy, Meacham and Cumbie are the brilliant mechanics restoring a piece of junk, an improved offensive line is our new engine, we have plenty of wheels, and once Boykin learns manual, the possibilities are endless. Either way, we all know what our defense can do; it's our insurance. It will keep being our defense and it will be glorious.

Bad car analogies aside, where I have the most faith in Boykin is his attitude. If Jaden Oberkrom crashed his Vespa (yes, he has one), breaking his leg, Boykin would do everything in his power to be the best kicker he could be. Unlike Brandon Carter, you never doubt Boykin's motivation. If I have to go with experience versus potential, I'm taking the former.