Share All sharing options for: UT Arlington Baseball at TCU: Preview and Thread 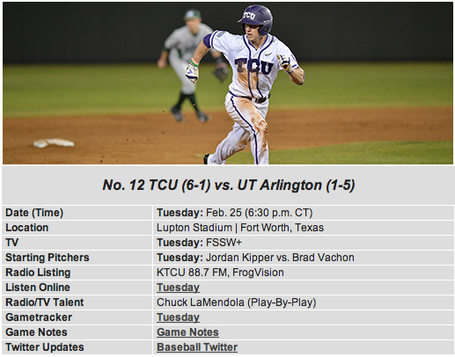 • Head Coach Jim Schlossnagle picked up his 500th career win on Sunday.
• TCU swept through the Kleberg Bank Classic to earn the tournament title.
Dylan Fitzgerald was named Tournament MVP.
• Cody Jones has gotten on base in his first plate appearance of the game five times this season. He has scored four times.
• Derek Odell hit safely and drove in a run in all four games last week.
• Connor Castellano, Kevin Cron and Boomer White have reached base safely in all seven games this season.
• TCU recorded at least 10 hits in a game for the fourth consecutive contest and the fifth time this season.
• Brandon Finnegan stretched his scoreless inning streak to 14.
• Preston Morrison hasn't allowed an earned run in 15 innings this season.
• TCU leads the Big 12 with a 0.86 ERA.

UTA NOTABLES
• The Mavericks have struggled getting out of the gates, starting 1-5 through their first six games.
• UT Arlington's lone win of the season was a 9-8 19-inning victory over McNeese State on Friday night.
• Ryan Bottger is the leading hitter for the Mavericks with a .417 average.
• John Michael Twichell is the leading run producer with five RBIs.
• Twichell and Peter Cuomo have the lone home runs for UTA this year.
• Errors have proved costly for UTA as nine errors have led to eight unearned runs on the season.
• TJ Whidby is the go-to guy in the bullpen with four appearances in the first six games. He has not allowed a run in 6 1/3 innings this season.
• The Mavericks have allowed 13 stolen bases on 15 attempts this season.

SERIES NOTABLES
• The Horned Frogs and the Mavericks will be meeting for the 146th time on Tuesday.
• Tuesday is the first of three meetings between the two teams this season.
• TCU swept all three games against the Mavericks in 2013.
• The Frogs have won four straight against UT Arlington dating back to 2012.
• UTA's last win in the series came on March 27, 2012. It was a 4-3 win in 10 innings at Clay Gould Ballpark.
• TCU holds an 90-55 edge in the all-time series.
• Since 2004, the Frogs are 19-4 against UTA.

HOME NOTABLES
• The Horned Frogs will play 31 home games this season.
• TCU holds an all-time record of 253-93 at Lupton Stadium.
• Last season, TCU ranked 11th nationally in attendance, averaging almost 3,600 fans per game.
• TCU averaged 3,332 fans in the four games this season, a mark that ranks 15th nationally.
• The Horned Frogs are 49-12 under head coach Jim Schlossnagle in home midweek contests.
MR. 500
In Sunday's 5-1 win over UTSA, head coach Jim Schlossnagle reached a career milestone with his 500th victory. 423 of the victories have come in a TCU uniform.

FLASHING HIS WHEELS
Cody Jones got off to a blistering start in 2014. The junior ranks second on the team with eight hits, including a pair of multi-hit games. He has a .333 average (8-for-24), 10 runs scored and a double.

Jones has reached base safely in his first plate appearance five times and scored four times. Thanks to a team-leading six walks and three hit by pitches, Jones boasts an impressive .515 on-base percentage.

In addition to his prowess at the plate, Jones flashed his speed on the bases. He is a perfect 8-for-8 in steals. Dating back to last season, he has stolen 14 straight bases successfully. For his career, Jones is 21-for-25.

RED HOT START
After missing the first three games of the season, Derek Odell wasted no time getting into the swing of things. He hit safely and recorded an RBI in all four games this week.

Odell is hitting a robust .474 on the season with one triple and seven RBIs. In three fewer games played, he ranks second on the team with nine hits and seven RBIs.

The junior also holds the distinction of having started at least one game at every position on the infield in his career. He has started 65 games at second base, 31 at first base, four at third base and one at shortstop.

ALL-TOURNAMENT ACCOLADES
The Horned Frogs were all over the Kleberg Bank Classic All-Tournament squad as seven members earned a spot on the team.

Dylan Fitzgerald was named tournament MVP after he reached base nine times in 13 plate appearances, tripled and drove in four runs on the weekend. He posted a .600 (6-for-10) batting average in the three games.

A HUMAN VACUUM
Keaton Jones has been the picture of consistency in his two-plus seasons at shortstop. The junior has played in 126 career games, all at shortstop. He has played 106 errorless games in his career and has a .958 career fielding percentage.