TCU heads to Houston to star in the Houston College Classic for the second time in the programs history.

Share All sharing options for: TCU at the Houston College Classic: Preview & Thread 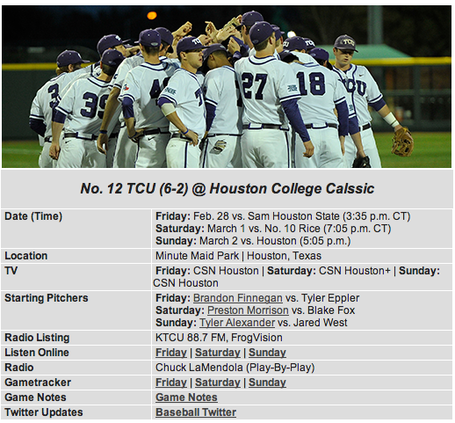 TCU NOTABLES
• Head Coach Jim Schlossnagle picked up his 500th career win on Sunday against UTSA.
• TCU swept through the Kleberg Bank Classic to earn the tournament title. Dylan Fitzgerald was named Tournament MVP.
• Along with Fitzgerald, six other Horned Frogs earned a spot on the all-tournament team.
• Tuesday night, TCU allowed 10 runs for just the second time in the last 71 games played dating back to 2012.
• The Frogs had allowed just 11 runs in the first seven games of the season before surrendering 10 against UT Arlington.
• Cody Jones has gotten on base in his first plate appearance of the game six times this season. He has scored four times.
• Derek Odell and Boomer White stretched their hitting streaks to five games.
• Dylan Fitzgerald ran his hitting streak to four games.
• Brian Trieglaff made his team-leading fourth appearance of the season.
• Connor Castellano, Kevin Cron and Boomer White have reached base safely in all eight games this season.
• Brandon Finnegan stretched his scoreless inning streak to 14.
• Preston Morrison hasn't allowed an earned run in 15 innings this season.
• TCU ranks second the Big 12 with a 1.75 ERA.
• The pitching staff has recorded double-digit strikes four times this season.

SERIES NOTABLES
• TCU and SHS are meeting for the 68th time. The Frogs hold a 38-29 advantage in the series.
• The Frogs are 3-2 against the Bearkats under Schlossnagle. TCU swept a three-game series in their last meeting to open the 2010 season.
• TCU and Rice are meeting for the 238th time. Rice holds a 121-115-1 lead.
• The Frogs are just 1-8 against the Owls under Schlossnagle. Rice has won the last eight meetings dating back to 2005.
• Sunday will be the 100th all-time meeting between TCU and Houston. The Cougars hold a 53-44-2 advantage.
• TCU and Houston are longtime conference rivals, having shared that distinction in the SWC (1973-96) and C-USA (2002-05).
• The Frogs are 10-4 against Houston under Schlossnagle. TCU took 2-of-3 from Houston in 2011 in Fort Worth. Houston won the opener 7-6 and TCU took the final two games of the series.

DYNAMIC DUO
The Horned Frogs have one of the most dymanic 1-2 punches on the mound this season. The duo of Brandon Finnegan and Preston Morrison have yet to yield an earned run this season in 29 combined innings.

Finnegan has not allowed a run in 14 innings pitched and leads the league with 22 strikeouts. Opponents are hitting just .180 off of the left-hander.

Morrison has surrendered just two unearned runs in 15 innings of work. The junior has fanned seven, issued just one walk and has held opponents to a .176 batting average.

Derek Odell ranks second on the team with seven RBIs this season, four of which have come with two outs. TCU is hitting .260 as a team with two outs this season. The Frogs have gone down in order in just 17 of the 68 innings they've been on offense.

FREE PASSES
TCU has done a good job taking what's been given to it this season, working 30 walks and getting hit by a pitch 14 times. Additionally, the Frogs have reached base via an error seven times, giving them 51 free base runners this season.

Of those 51 free passes, 17 have turned into runs for the Horned Frogs. TCU ranks fourth in the Big 12 with an on-base percentage of .380.

START ME UP
TCU has used four starting pitchers this season. The quartet of Preston Morrison, Brandon Finnegan, Jordan Kipper and Tyler Alexander have done their jobs, boasting a 5-2 combined record with a 1.63 ERA.

Overall, the group has allowed just 14 runs (nine earned) on 40 hits in 49 2/3 innings pitched. They have struck out 44 and walked just six while allowing opponents to hit .216 against them.