TCU looks to build on its two game winning streak this weekend when it plays host to Michigan State beginning Friday night. Sunday's game will be televised on FSSS+. 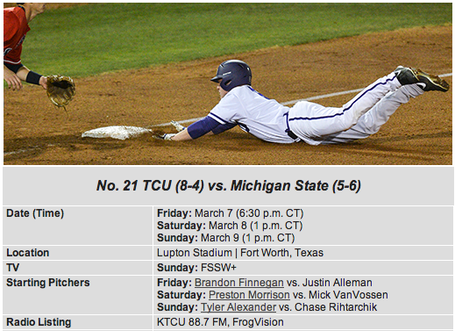 TCU NOTABLES
• TCU played in its first extra-inning game of the season and tallied a 5-4 15-inning win over Dallas Baptist Tuesday night.
• The game matched the longest game in program history. The Frogs defeated Baylor with two outs in the 15th inning on April 20, 2013.
• The bullpen allowed one unearned run on five hits in 10 innings Tuesday night. Brian Trieglaff recorded his first career victory.
• The TCU pitching staff recorded double-digit strikeouts for the sixth time this season.
• Boomer White and Kevin Cron have reached base in all 12 games this season.
• Cody Jones tallied his 10th and 11th stolen base of the season. He has stolen 17 straight dating back to last season.
• TCU leads the Big 12 with 25 stolen bases.
• TCU ranks second in pitching with a 2.15 ERA and first in strikeouts with 115.
• Preston Morrison leads the Big 12 with a 0.39 ERA, while Brandon Finnegan leads the nation in strikeouts with 33.

MICHIGAN STATE NOTABLES
• Michigan State comes in with just one victory in its last six games.
• MSU dropped a 5-1 decision to Louisiana-Monroe on Wednesday.
• The Spartans got off to a great start with a series win over Wright State and a 2-1 record in the Big Ten/Pac-12 Challenge.
• Michigan State's biggest win of the season was an 8-7 victory over then-No. 1 Oregon State on Feb. 22.
• Blaise Salter is the leading offensive threat with a .341 average, one home run and 11 RBIs.
• Anthony Cheky has six of the Spartans' 14 stolen bases.
• The defense has been an Achilles Heel for the Spartans as 16 errors have led to 21 unearned runs.
• On the mound, Jake Lowery is the go-to guy in the bullpen with six appearances in the first 11 games of the season.
• Michigan State's Saturday starter Mick VanVossen has a pair of wins to go along with a 3.00 ERA in three starts this season.

SERIES NOTABLES
• TCU and Michigan State are meeting on the diamond for the first time in series history.
• The Spartans are one of four new teams the Horned Frogs will play this season.
• TCU took a 10-3 victory over Northern Colorado in its first meeting against a new team this season.
• The Frogs will also meet Dartmouth and Cal State Northridge for the first time in program history.

FLEET OF FOOT
The Horned Frogs leads the league with 25 stolen bases. Oklahoma State is close behind with 24.

Cody Jones leads the pack with 11 stolen bases this season. Seven other Horned Frogs have contributed a stolen base this year.

TCU has tallied at least one stolen base in all but two games this season. Four times this year the Frogs have stolen four bases in a game.

EXTRA, EXTRA
Tuesday night's 5-4 win over Dallas Baptist in 15 innings tied for the longest game in program history. TCU defeated Baylor with two outs in the bottom of the 15th on April 20, 2013.

A SWING AND A MISS
The Horned Frogs are one of three teams in the Big 12 to boast 100 or more strikeouts. TCU leads the league with 115, followed by Oklahoma State with 108 and Oklahoma with 101.

TCU has tallied at least 10 strikeouts in six of the 12 games played this season. Three times, they have recorded 15 strikeouts.

TURNING TWO
TCU turned a trio of double plays in Saturday's 1-0 loss to Rice. On the season, the Horned Frogs have turned nine double plays.

No one is better at inducing a double play than Preston Morrison. Five of the 10 double plays turned by the Frogs this season have come with Morrison on the mound.

Over the course of his two-plus seasons in the Purple and White, Morrison has seen the defense turn 31 double plays.

DUCKS ON THE POND
Getting base runners has not been an issue for the Horned Frogs this season. Turning them into runs proved to be a little difficult this past weekend.

TCU has had at least one base runner in all but 24 innings this season.

FLASHING HIS WHEELS
Cody Jones got off to a blistering start in 2014. He has reached base safely in his first plate appearance eight times and scored four times. Thanks to a team-leading 11 walks and three hit by pitches, Jones boasts an impressive .466 on-base percentage.

In addition to his prowess at the plate, Jones flashed his speed on the bases. He is a perfect 11-for-11 in steals, a mark that leads the Big 12 and ranks second nationally. Dating back to last season, he has stolen 17 straight bases successfully. For his career, Jones is 24-for-28.