Did Brandon Carter just save TCU ?

And solve the Quarterback debate in the process?

Share All sharing options for: Did Brandon Carter just save TCU ?

There's always something terribly tragic about a player that doesn't fulfill their potential as a player. Brandon Carter, whose heroics in the Boise State game in 2011 or West Virginia 2012, heralded great things to come. It wasn't just Carter's off the field issues that were a problem, but that in combination with an inability to not bring those problems with him to the field was where Carter really hurt TCU.

Like we said with Ladarius a few months ago, this isn't a lecture of what to do or what not to do with your extracurricular activities. But when you're held to a higher standard, whether you like it or not, you lose certain "freedoms" other kids your age get. 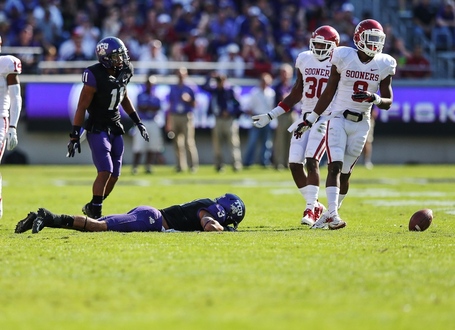 Carter's loss was a long time coming, but his (definite) eventual exit from the TCU program helps the Frogs much more than it hurts them. You're only as strong as your weakest link, and with the cancerous Carter gone, the Frogs now have more room to breath. Carter's talent and potential were endless, but no longer having to worry about Carter's mental issues, or whether or not to play him in the slot and have him return kickoffs is a load off for the Frogs.

As much as he wants to take snaps, a desire you have to admire, Boykin's NFL potential is as a receiver and today may be the day a brilliant career begins. With Boykin, the plethora of inside talent grows. David Porter, Ty Slanina and Cameron Echols-Luper should do wonders in the new fast-paced offense and no longer having to worry how Carter will fit in this equation can only help TCU. 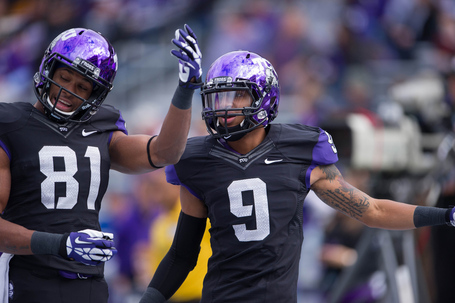 The only question now at receiver is who will join Josh Doctson on the outside? The two prime candidates are Jordan Moore and Ja'Juan Story. Regardless of whether it's Moore and Story, having either of them on the second cut with the speedy Kolby Listenbee is exciting.

So are we a little more comfortable with Boykin as receiver and Joeckel easing the transition of the new offense, and thereby letting the young guys learn the ropes?

At least we no longer have to hold our breath, close our eyes, and potentially cry every time Carter returns a kick. Plus a CEL-Boykin-Combo returning kickoffs makes me very, very happy.

As for Carter himself, I wish him nothing but the best. Despite his personal issues, he always seemed like he loved being a Frog. Being under a microscope and having to mature in the spotlight is a hard task for anyone.

I'll remember the good times, Brandon. Once a Frogs, always a Frog. Godspeed.