Will 2014 be TCU's most important year since joining the Big 12? Our good friend Alex Apple seems to think so. Why is it our most important season to date? What's being done to fix the problems from last year's tough season? And who are TCU's best recruits thus far? 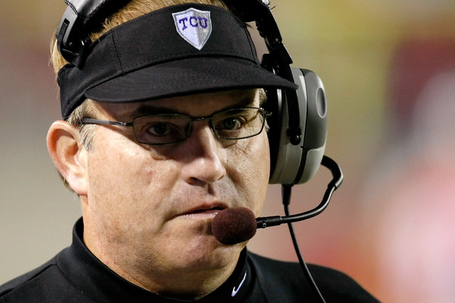 Marsh: Speaking on the 2014 Recruiting class, who do you think our best recruit is thus far?

Alex Apple: I think the class has started off strong and I think they [Coaches] have been more active earlier than they have in the past. They have some promising guys, but right now I'd go with Braylon Mitchell, the defensive end out of Round Rock. He's a real nice player, he's got incredible strength, and moves really well for a defensive end. He chose TCU pretty early. He had [an offer from] Oklahoma, he could've had anyone pretty much. But he committed pretty early, I believe last July, and I think that speaks to his level of excitement about TCU.

For an honorable mention, I'd go with JF Thomas out of South Oak Cliff. Wide receiver, 6-4, he's coming to TCU and playing a position we need. At 6-4, he can do a lot of things athletically that TCU's unable to do currently at that position.

M: Do you see any sleepers yet in the class?

AA: I don't know if you could really classify him as a sleeper, but the guy I'd say that's right up there with the two guys I've already listed is Semaj Thomas. He's a really agressive player, plays middle linebacker, but he can move sideline to sideline really well, which is crucial for Gary Patterson's 4-2-5 scheme. He's a really great fit for TCU, he's been to a lot of the practices and seems to fit in really well. 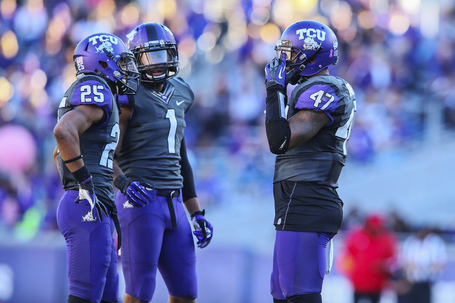 M: Staying on the subject of the defense and the Gary Patterson system, is there anything you saw in the Spring game you noticed? Jason's gone, so is there a guy right now that's going to take on that leadership role for the defense? Will it be Sam Carter? Will it be Devonte Fields? Could it even be someone like Chris Hackett?

M: I've been reading a lot about Iloka. A lot of writers are excited about him. What have you seen from him that's impressed you and shown you that's he ready to get immediately in the mix?

AA: He's got really great instincts. Patterson's defense is hard to learn right off the bat, so coming in the spring, he showed up and made some big plays. He's got the size, speed, and every tool to be a great player.

Not sure which of the three safety positions he'll fill, but you saw last year the need for the fourth safety...especially when running the nickel package. You saw last year with Kindred and how having that type of player is such a luxury in a pass happy league.

M: Let's talk a little about Texada. Also, from everything I read, Texada's been primed to take over Jason's position. What from him has impressed you?

AA: The key for Ranthony, you can't get beat deep. Ranthony has the speed. He can run, he's got good hips and he plays with great technique. They need that second corner to play well, and I think Texada can do that because he's got the requisite speed. 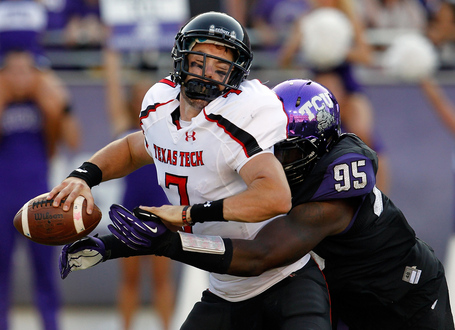 M: Let's talk about Devonte Fields. A lot of people are saying he's back and bigger than ever. After a weird 2013 season, what has he shown to prove to you that he's back?

AA: If Devonte plays well, he can go to NFL Draft in 2015. He knows that, he's just got to prove that some of immaturity he showed last year is not indicative of his character. If you get into that same sort of off-season trouble like he did last year, you start to get labeled a troublemaker and stuff like that.

One thing that helps is that he's got Davion Pierson and Chuck Hunter, two of the Big 12's best defensive tackles. So when you get them with MIke Tuaua or whoever lines up on the opposite side of Devonte, you have a very solid defensive line.

When's he right and he's focused, there's no one better on TCU's team. He's the most talented player they have.

AA: Well, it's hard to say. He's got that potential. I see him in the first or second round. Not ready to say he's first rounder quite yet. He's certainly got the arsenal for it. He's just got to show it on the field this year. He's got an NFL future for sure, and that should be enough to keep him focused and motivated.

M: The Defense is pretty much a clean sheet across the board, but do you see any signs of weakness? Is there anything we should be worried about?

AA: Two things; how's Ranthony Texada going to fill that corner position and the depth of the defensive line. Hunter and Pierson are great, and then you have Tevin Lawson, who's also really good, who will probably fill the other slot, but you're going to have to find some more depth.

Also, finding the fourth linebacker will be key. 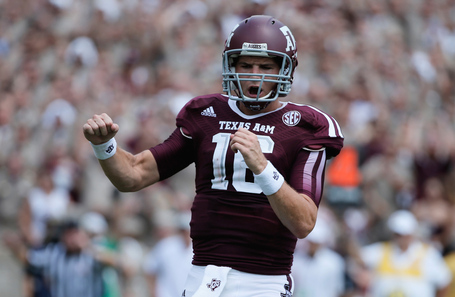 M: Shifting gears, the offense the last two seasons has been the glaring weakness for the team. Where do you think the biggest weakness is on offense and getting back on track, where do you think it starts? Does it start with Meacham and Cumbie? Or is it going to be to the offensive line?

I personally go with the offensive line as our biggest weakness.

AA: I have to disagree. I'm going to go with the wide receiver position. Right now, it's void of great playmakers. David Porter needs to step up. They're without a big player on the outside, they've got to develop something there whether it's Josh Doctson, Ja'juan Story, or Jordan Moore. The key to this offense is you're going to have to throw a three-yard pass and turn it into a first down. I don't see a guy that can do that right now.

M: With Carter's likely departure, do you think Trevone Boykin now moves to the slot full time? Basically, is it guaranteed that Boykin will be playing receiver 80-ish% of the time and Matt Joeckel becomes the starter?

AA: I don't think anything is guaranteed. I think Boykin needs to play receiver. He's 5-10 as a starter. I'm not sure he has the accuracy or throwing ability to lead this offense under its new system. So yeah, with Joeckel or whoever is taking snaps, Boykin will be out there at receiver.

Having him at receiver definitely helps. Why was Texas Tech's offense so good last year? Because they had guys like Jakeem Grant and Bradley Marquez, who you threw a four-yard pass to, and then sixty yards later they scored. That's what TCU doesn't have and that's why receiving is a focal point for TCU recruiting right now. Despite all the talent that's there, they haven't seen the production.

AA: Well when you bring in a guy like Joeckel, your hope is that he's going to come in there and start. That leaves the option to redshirt a guy like Foster Sawyer. Grayson Muehlstein is another guy that they think can start. He's got a strong arm, he's filled out, and very accurate. It's not going to be a wash and just give it to Joeckel, I think he [Joeckel] will start, and if they're tied, he's going to go with a guy with more experience.

Whether or not he's more talented, Joeckel's been in the type of system that Meacham and Cumbie will run.

M: Exactly. There's definitely a lot of overlap with Kevin Sumlin, Kliff Kingsbury, and Meacham/Cumbie, so do you think Joeckel coming in, having a knowledge of this system, will help ease the transition and help TCU in the long run?

AA: It can only help. TCU's going to have to find a way to put up 25-30 points a game, because a Gary Patterson defense rarely gives up anything more than that. So there's certainly no downside to bringing in a guy like Joeckel.

M: There certainly was a weakness on the offensive line last year, can you see anything that's being done to change this?

AA: The line is bigger and better. It's better on the interior because Joey Hunt is better, Frank Kee is better, and Bobby Thompson is better than anyone they but out last year. They needed better interior guys last year and they have that this year. Aviante Collins is a guy that needs to improve, but their pass protection is already looking better. They're doing something wrong if there isn't an improvement, because they players are certainly better. 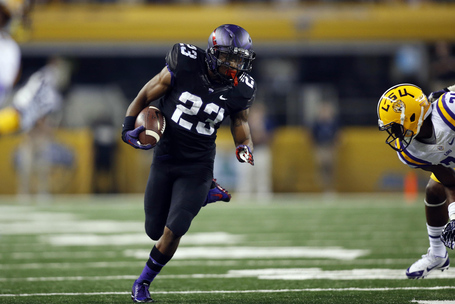 M: Looking ahead at the schedule, what's the first big challenge for TCU? We play Minnesota early, but our first conference game will be against Oklahoma, who's tabbed by many as the early favorite, what's it going to take to be prepared for that very, very big home game?

If they want to show the improvement and if TCU fans don't want to be taking crap from other schools like they did last year, then TCU needs to win three of those four. They should beat Texas Tech at home...no excuse for losing that game. Probably need to beat Oklahoma State at home and then you split the Oklahoma and Baylor games, your season's on the up and up and you have good momentum to finish the season strong against some of the weaker teams.

AA: Worst? 5-7 again. You have five wins built in; SMU, Stamford, Minnesota, Kansas and Iowa State. If you lose any of those five, you have no one to blame but yourself. If TCU wants to be where they want to be, you got to win those games then go beat the likes of Kansas State, West Virginia and Texas Tech.

9-3 would be a great season for TCU. Not saying, they can't pull off a miraculous improvement like a lot of people think they can. But a 9-3 season would be great.

M: Is there anything else we should know about the 2014 season?

AA: TCU's not the new guy anymore, and this season especially is going to be definitive and the next three or four years will depend a lot on what happens this season, more so than any other. It's of great importance for TCU to play well this season.

M: So would you say this TCU's most important year since joining the Big 12?

AA: The most important year since joining the Big 12. No question.