The Horned Frogs are the visiting team this evening. The loser will play Siena on Sunday at 2:30.

Share All sharing options for: Fort Worth Regional: Sam Houston State vs. TCU

TCU looks to extend its winning streak to eight games tonight when it takes on Sam Houston State. Preston Morrison is going for the Frogs tonight, and the Big 12 Pitcher of the Year is looking to improve his record to 10-3 on the season.

Sam Houston State advanced to this point with a 2-1 victory over Dallas Baptist Friday afternoon, while the Frogs took 11 innings to dispatch of 4-seed Siena by the same score.

In Saturday's first game, Siena recorded its first ever tournament win with a 9-8 victory over Dallas Baptist. Dallas Baptist was eliminated with the loss.

Jason Simms is on the mound for the Bearkats tonight. He's coming into tonight with a 5-3 record and 2.72 ERA on the season, and he's allowing a .230 average to opposing hitters. He last appeared on May 23rd, where he recorded a loss against Northwestern State. 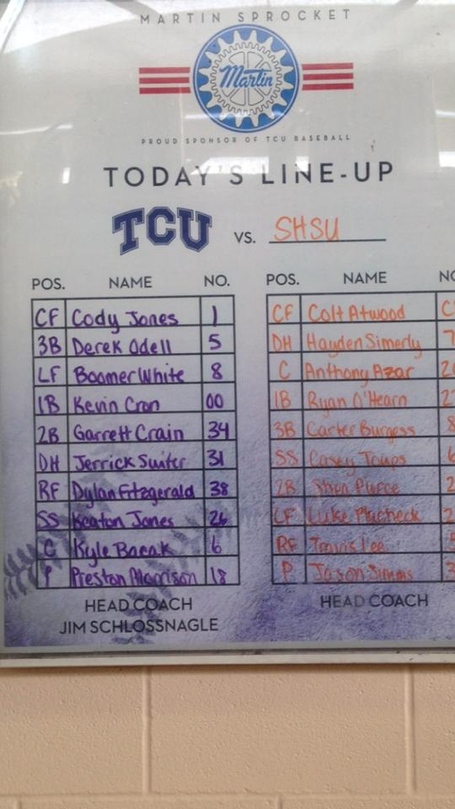