Analyze This: The Big 12 Preseason Poll

Good news for most teams--the poll is usually wrong.

Share All sharing options for: Analyze This: The Big 12 Preseason Poll 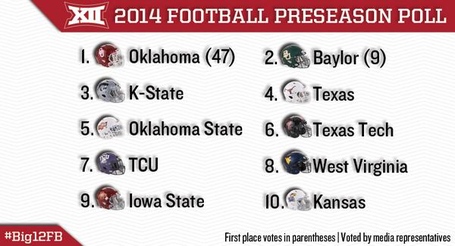 So what will 2014 bring? Let's break the Big 12 up into four distinct categories.

We're Understandably the Favorites, So We're Probably Not Going To Win 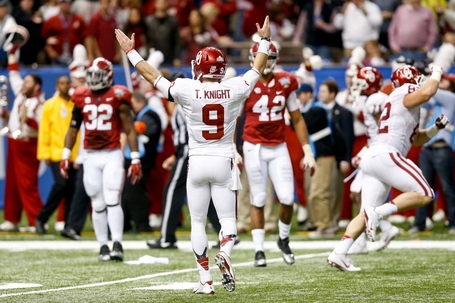 Remember when using bowl performances was a really great way to accurately calibrate next season's performance? That's not to say the Sooners didn't play a great game against Saban's machine. Nor is it to say that the machine took a break. Oklahoma beat the Tide clean as a whistle. Side note: If Saban was offered $100 million by Texas, does Oklahoma get some sort of transitive property win?

In 2010, Oklahoma was the last team that the voters correctly picked to win the conference. 2012 is an exception, because Kansas State got the tiebreaker and played in the Fiesta Bowl. OU may not be as flashy as Baylor on offense but Trevor Knight plus Mike Stoops' gritty 4-2-5 defense is the Big 12's best hope right now for the new playoff format. But an overwhelming favorite? I don't think so. However, former Missouri Tiger, Dorial Green-Beckham is appealing his eligibility status for 2014. Regardless of his poor decisions off the field, if Green-Beckham gets to play in 2014, the Sooners may be trading blows with Jimbo and Jameis come January.

Baylor may win ten games, and Bryce Petty could very well win the Heisman. But you're not going to convince me that their defense is prepared to go undefeated in this league. Bryce Hager is the best linebacker in the conference, and may end up having an All-American season, but the Bears are reloading a secondary in a pass-happy league. Not the ideal situation you want to have if you're trying get to the playoff. Also, Baylor doesn't have the same luxury that Texas and Oklahoma do. Whereas Texas or Oklahoma can sneak in as a 1-loss team, the Bears will have to go undefeated if they want to be voted into the playoff.

Baylor averaged over 600-yards per game last season, but that'll be lower this year as the Bears patch up their offensive line. The fantastic Cy Richardson is gone, and Spencer Drango and Troy Baker are both recovering from injury. Not to mention, the running game will rely heavily on Shock Linwood, who will be without his counterparts Lache Seastrunk and Glasco Martin. Shock may be the most talented of three, but it will be interesting to see how he plays without splitting significant time with other backs.

Don't get me wrong, though--the offense will still be plenty great. Petty will be without Tevin Reese, but he'll have unanimous all Big 12 selection, Antwan Goodley to anchor the receiving corps. Petty will have plenty of other weapons to play with including; Levi Norwood, Corey Coleman, and Clay Fuller.

One big reason I don't see the Bears winning the Big 12 is the November 8th matchup against Oklahoma in Norman. If things play out as most are thinking, this will essentially be the conference championship. Aside from that, Baylor's scheduling is quite favorable. They'll light up the scoreboard in their non-conference games, before finally getting early tests against Texas and TCU in early October. Until then, it'll be hard to calibrate Baylor's underlying weaknesses. But after those two games, it should be clear whether this team is for real or not.

Here's Where You're Going to Find Your Winner 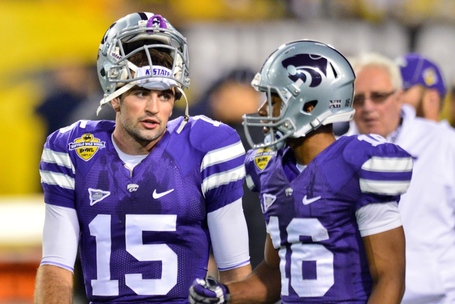 Is it fair to call Kansas State a blue-collar team? Just like in 2012, this team's going to turn a lot of heads. They've always had great defenses, but once they peppered in a capable offense, the team was firing on all cylinders at the end of last season—winning 6 of their final 7 games. Jake Waters won't do anything fancy taking snaps, but his accuracy, intelligence, and leadership could make this a 2012 scenario. Plus, he has Tyler Lockett, who could end up having the best offensive season for a player not named Bryce Petty.

Charlie Strong's defensive background is going to make Texas a frightening team. But adjusting to the new system will take some time and it will be a couple of years before Texas' true ceiling can be reached. The Longhorn is the most recognizable brand in college, but for the first time since 1998, it's going through a complete personality change on the field...and that's going to take time. Texas' quarterback dilemma is far from solved, but the strength of their running game could still make them a sleeper for 2014.

Of all the teams, Oklahoma State was the one that surprised me the most. Ahead of Kansas? Well, yeah. West Virginia and Iowa State? Yes. Even picking these guys ahead of TCU is surprising. But ahead of Tech? C'mon, now. The Cowboys lost 28 players, and have been test driving quarterbacks going on three years now. JW Walsh seems primed to establish himself as a winner and he has a great running back in Desmond Roland. The linebacker situation may be cause for concern, but Oklahoma State has enough talent on the secondary—that brings rushers and covers extremely well—and that alone will keep them very competitive. But as teams like our beloved TCU have learned, that will only get you so far.

Kliff Kingsbury and Texas Tech don't need your love. I'm not saying Davis Webb is the next Peyton Manning, but the narratives surrounding Tech--the idea that they have a constant chip on their shoulder--makes this team very scary. Plus, the idea of Webb as a four-year starter in the Kliff Kingsbury-system will make this an increasingly dangerous team. Even sans a Michael Crabtree, this could be 2008 Tech and then some. Tech has always been a strong starter, they just have to start learning to build endurance.

Simply put, TCU can score 30 points a game and they'll have 8, 9, and even 10 wins locked up. It's just a matter of whether or not the Cumbie/Meacham system will have that impact in its first year. Despite the 4-8 season, the preseason chat is more optimistic than it was last season. (TCU's Vegas odds went from 300-1 to 200-1 in a week's time, and should climb even more before the season begins).

Everyone talks about how great TCU's defense is--but everyone learned the hard way last year how dangerous it is to assume said defense will win you games. It may win you championships, but your offense is going to have to get you there. It was easy to assume the shortcomings of the Rusty Burns and Jarrett Anderson's offense would "work themselves out". Even if you took Pachall and the mediocre line out of the equation in 2013, many--including myself--thought the run game would be the slow, clock eating twist to the defense's dagger. But it wasn't, and TCU missed their first bowl game in a decade. 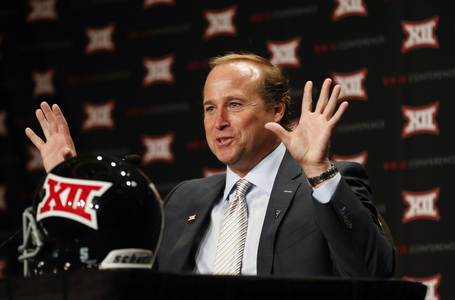 West Virginia and Iowa State will both play spoiler this season. If either are trending upwards though, I'm going to with the Cyclones. We'll talk about this later, but Dana Holgorsen is on the hot seat more than any other coach right now in the Big 12. I mean, they lost to Kansas by 11 points last year. Still, they're going to play spoiler, especially when playing in Morgantown against Oklahoma, Baylor, Kansas State, and TCU--one of these games the Mountaineers will win

Iowa State doesn't look like they want to get rid of Paul Rhoads any time soon. Rhoads' record (27-36) may not impress many, but he's the only other coach aside from Gary Patterson and Charlie Strong to come from defensive backgrounds, and that’s going to help in the long run. They had three big blowout losses last year against Baylor, Oklahoma State, Oklahoma. But played every other game close to the chest—including a narrow loss to Texas, a game they deserved to win but was left up to higher powers. 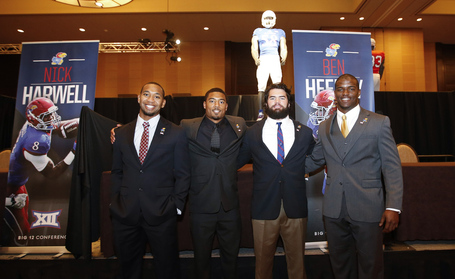 Just kidding. A year ago, I probably would've left it at that. But I'm actually excited to see what Charlie Weis is going to do with this ball club. This will always be a basketball school, but this could be a fun team to watch in the coming years. It'll be a five-year plan, but Weis' strangely optimistic view of the world is a great fit to rebuild the culture in Lawrence.