So beautiful it should be hung in the Louvre? Or hot garbage?

I'm no fashionista. But from what I can tell, white goes with just about anything. I also can't confirm this will be a helmet we will wear this season. Just that it was displayed in the TCU office. Overall, I really like the helmet. Unfortunately TCU doesn't have the same luxury as most schools do, and they're always being rebranded in some way...which can cause a headache.

The current Horned Frog (which is a great design) has been around for quite sometime, it's just trying to make it work with uniforms that's tricky. But I'm happy with this. Like I said, white goes with anything (or so I think), so having this in the arsenal will fit with every uniform combo we have.

Even if you're not a fan, just remember...it could've been a lot worse. A lot worse. 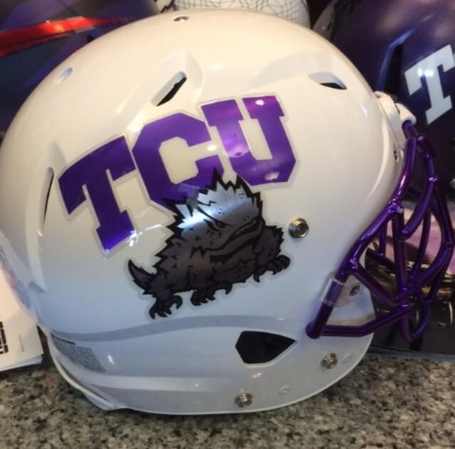 If we're going to have a half-a-dozen helmets anyway, we need a white helmet. So, this might be an "A" purely out of necessity. The purple chrome domes are my favorite. So I dig the chrome facemask. It's not necessary, but it works. The normal purple might work better, but it's a lot better than a matte facemask.

My only real qualm with the helmet is the logo. I love the idea of the Frog staying on the helmet and having a universal logo--but, I don't think a shiny silver horned frog needs to be on a white helmet. This is the rare exception where the frogless helmet works. Or just putting a little frog on the back of the helmet.

Sans the Frog, this would be a pretty perfect helmet. This also has a better first impression on me than the marble helmet that debuted during last year's LSU game (which has since grown on me). Also like the marble helmet--one improvement I'd like to see would be projectile red coming from the top of the facemask. On a white canvas, it could end up being a little too real and something straight out of American Psycho. I'll check to see if Gary likes Huey Lewis and the News.