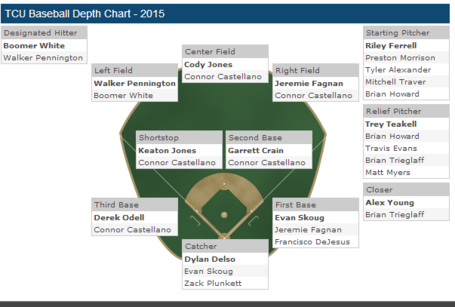 - I want to see Pennington play, the kid should have some promise in his bat and be better than Boomer in left. If not, Boomer is still there on opening day.

- Where is the depth? The front-line guys are strong across the board, but who backs up CF, RF, 3B, SS, 2B, and C? Major holes there that need to get figured out in fall ball.

- I think Skoug will get a chance to catch, but will realize he is behind both Delso and Plunkett (another freshman catcher who they kept quiet until after the draft) defensively. He could play at first though, which would get his plus lefty bat in the lineup.

- I think Delso catches, too much offense to keep him out.

- Fagnan in right makes sense IF he is recovered and healthy, the guy is a great athlete.

- Ferrell moves to SP (ugh), the other two from last year remain, plus Traver for the 4th pitcher slot.

- Teakell leads a talented but not so experienced bullpen.

- Alex Young to closer? I hate it, but if he can throw strikes he will be good there. Problem is, he has yet to consistently throw strikes in his career.

A few holes in the bullpen, closer, catcher/1B and overall depth must be solved in the fall. But, the front-line talent is awesome and undeniable... Is it February yet?