HawkeyedFrog's limited take on the best Wideouts in TCU history. The Best of the Best looks to rank the top player at each position (or unit) in the history of the school. And of course we'll be right every time.

Share All sharing options for: TCU's Best of the Best: Wide Receivers

Here's a disclaimer before we get into discussion on TCU's best wideouts- This is not an easy position to do a "best of" list for a school like TCU.  Ever since the departure of the great Dutch Meyer, TCU has generally had most of its success on offense on the ground with quarterbacks not asked to do too much (other than run the ball and not screw up), and back in the day when Sam Baugh and Davey O'Brien were slinging the ball the concept of the wide receiver was still in its infancy- the passes were generally to wingbacks and tight ends.  Then there's the issue of the team that each frog was playing on- how do you rate a player who was essentially the sole focus of the defense on some bad TCU teams in the 70s and 80s against the explosive numbers of some of the more recent frog receivers?  The end result is that if you've been following the team for the past twelve years or so you were probably fortunate enough to see many of TCU's all time great receivers play, and hopefully the new offense will result in some new names jumping to the head of the list.  Still, despite the relative lack of names, the HawkeyedList goes seven deep, because so many of these players played huge roles in getting us where we are now. 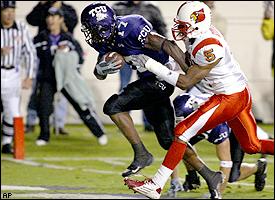 Rodgers made his TCU debut in 2003 and immediately became a key player in that fantastic Frog team that, but for a slow start against Southern Miss, would have been the first ever BCS buster.  Despite being mainly remembered as a kick return specialist (which he did well enough to be a first team All-American) and slightly overshadowed by his running mate Reggie Harrell, Rodgers was dynamite on the field and averaged over 14 yards per catch over his career and is eighth on the Frogs' all-time receiving list despite playing for just three seasons.  Rogers' explosive plays were also often featured on highlight reels, which couldn't have hurt when the Mountain West started sniffing around to extend an invitation, and he was a big part of winning that first MWC championship in 2005, where he scored the game winner in overtime against the hated BYU Cougars in our first meeting since the early WAC.  Rodgers was Jeremy Kerley before Jeremy Kerley. 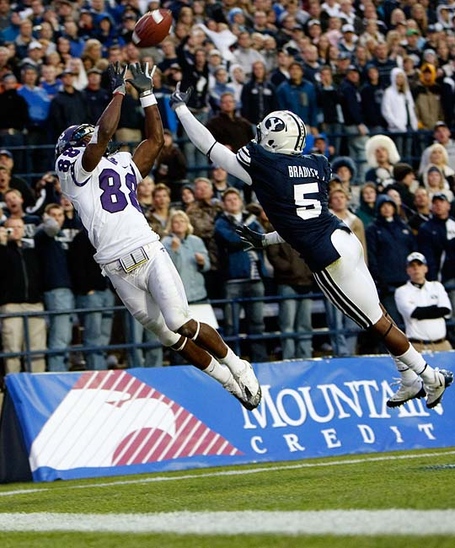 TCU's third all time leading receiver achieved big things through consistency.  One of two frog receivers on the list to come agonizingly close to breaking the 1,000 yard mark in a single season, ending up at 988 yards in 2008.  A more balanced attack led to fewer targets and catches for Young in his junior and senior years, but Young remained a selfless and consistent possession receiver and ended his career with a rose in his mouth, making 5 receptions for 57 yards in the Rose Bowl.  He also made one of my all time favorite touchdown catches in a game against BYU, which you can see above. 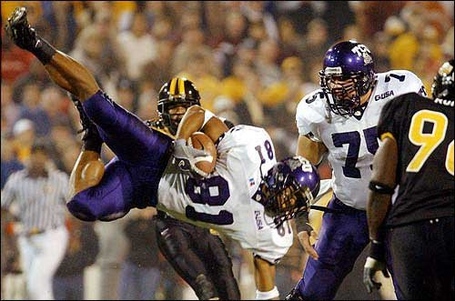 The other half of the wide receiver duo that terrorized CUSA, you can tell how much I love Reggie Harrell by the fact that his presence makes it okay for me to look at a reminder of that 2003 game at Southern Miss.  Like Cory Rodgers, Harrell played just three years for the frogs, but compiled TCU's only season of 1,000+ yard receiving in that 2003 season, before injuries limited him to appearing in just 7 games in the 2004 season that we don't talk about 'round these parts- heck, having a healthy Harrell might have actually made 2004 a season worth remembering.  Harrell compiled a beastly 17.6 yards per catch over his career, every bit of the big play receiver, but his lone failing was not finding his way into end zone enough- only 6 touchdowns for his career, often leaving the frogs short of the end zone and having to settle for field goals.  I don't blame Harrell for this- we all remember Mike Schultz's conservative playcalling in the red zone, but it does hold him back from a spot in the top 3, which might otherwise be warranted. 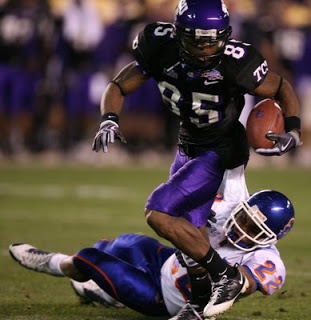 Here's where the selecting gets tricky.  Jeremy Kerley was absolute dynamite in his last two seasons for TCU, tying the single season record for receiving touchdowns in 2010 and was a true threat to score any time he touched the ball.  On the other hand, a lot of Kerley's best moments came at quarterback and returner, so ranking him specifically as a receiver is much more of a challenge- he doesn't have the total numbers of anyone else on the list, with just over 1,000 career receiving yards, but for being a game changer Kerley is solidly in my top 5 all time- I just wish I could justify him higher on the list. 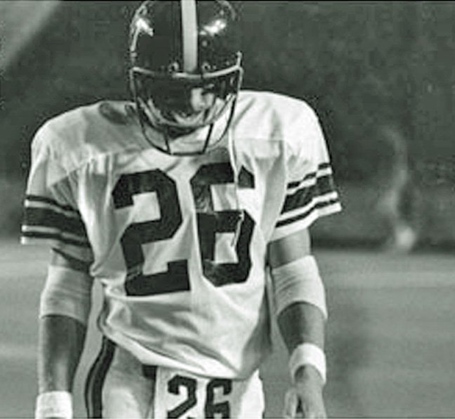 TCU may have been the worst team of the 1970s, but there was one bright spot for the horned frogs in the dark ages- the consistent excellence of Mike Renfro.  TCU won just four games in Renfro's four seasons, beating UT-Arlington, Rice twice and Miami (Florida Miami, and yes they sucked then).  Despite a dearth of talent, Renfro carried the team and became TCU's all-time leading receiver in both yards and touchdowns, the former title he holds even to this day.  If there's a player on this list I'm underrating, it's probably Renfro as he was both before my day and a part of some truly miserable frog teams, but they'd have been many times worse without Renfro's efforts. 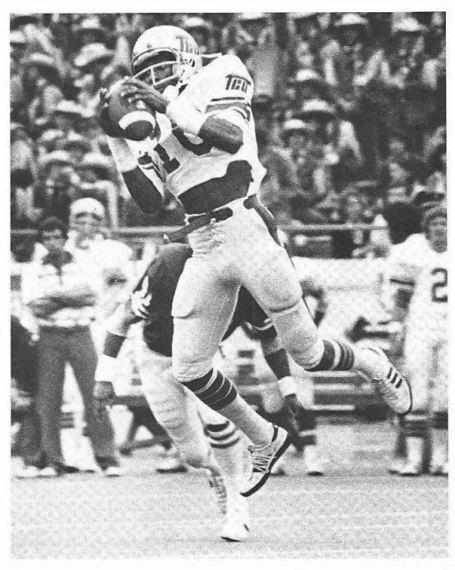 Despite playing in some of the dark times of TCU history, Washington is TCU's only first team All-American receiver in team history, which shows the amount of talent he had (even if the talent around him was lacking).  Washington was the key player in defeating the 18th ranked Arkansas Razorbacks in 1981, who had beaten the Frogs in 22 straight contests before Washington scored two touchdowns in the last five minutes of the game to put TCU on top 28-24.  During his All-American season Washington snagged 49 passes for 854 yards and 6 touchdowns despite appearing in only eight games- that's a 106 yards-per-game average for the games he was on the field, an average no other TCU receiver could even sniff.  That Washington had the most dominant single-season for the Frogs is hard to dispute, but in the all-time race he's just short of... 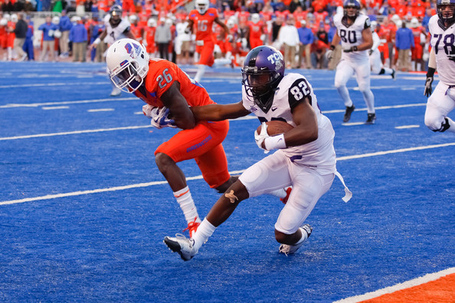 Power, speed, hands, leaping ability.  If Boyce had been three inches taller he would've had his name called early in the first round of the NFL draft, because it's hard to draw up a better receiver.  Boyce is TCU's record holder for touchdown receptions and is number two on the all-time yardage list, and amazingly he did it in only three seasons.  Still, it's hard to find any fault at all in his resume, no matter what criteria you're judging wide receivers by.  Numbers?  22 touchdowns and 2,535 yards.  Successful teams?  He was a big part of the Rose Bowl team his freshman year, won the Mountain West again his second year and helped ensure a bowl bid in our first Big 12 season.  Clutch plays?  First watch as Josh Boyce breaks Boise State's 65 game home winning streak.  Then look at this, going to Boyce in the clutch to ensure a bowl game for TCU.  His last two years at TCU Josh Boyce was simply the best player on the field every time he strapped on his helmet (cry away, Kellen Moore) and is the best receiver in TCU history.

Agree?  Disagree?  Die-hard Stephen Shipley fan who wants to fight me?  Let us know in the comments!