Then there were two. We revive "The Great Quarterback Debate" debate that began last April.

Last April, the arrival of former Texas A&M quarterback and Johnny Football's number 2, spiced up TCU's quarterback race. And by spice up, we mean everyone assumed TCU finally had a quarterback. There wasn't even much of a debate as to whether Joeckel would start, it was more about how he'd fit into TCU's new offense. It's now late August, and while Joeckel hasn't disappointed, Trevone Boykin has just made things more interesting.

Patterson says both will play during the Samford game, and the race will go from there. The narrative of a two-quarterback is not only familiar, but as we saw last season, it's deeply unpleasant. So here's a modified version of the debate we had in the spring. 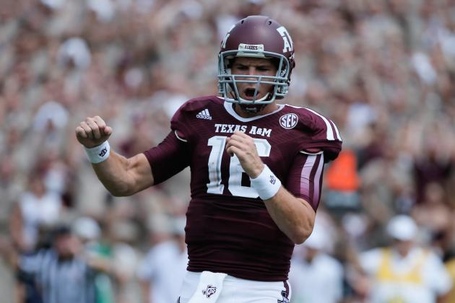 Joeckel's playing time last year was minimal, but effective. As a junior, Joeckel went 22-of-37 for 293 yards and threw for two touchdowns. Getting time under the Sumlin and Kingsbury system, which has significant overlap with the Cumbie and Meacham system, it's possible that Joeckel could fit right in with the new system.

Like Winston "The Wolf" in Pulp Fiction, Joeckel could be the fixer TCU needs to help them ease into a new offense. But with great power, comes great responsibility...and a lot of pressure. If Joeckel's going to come in and stir the pot, he better be ready to immediately prove his worth. If something's twenty minutes away, Joeckel better be there in ten.

Here's the best play-out of The Joeckel Situation:

Win: Even as a Pro-Style quarterback, Joeckel fits in very well with Meacham and Cumbie's fast-paced offense. The offensive line is significantly improved and the defense finally gets some wiggle room to work with. Joeckel's maturity and experience is also a huge plus. He spent considerable time in College Station learning from one of the best offensive minds in college football in Kevin Sumlin and shadowed arguably the greatest college player of all-time in Johnny Manziel.

Win: Boykin, whose athletic ability makes him one of the best weapons on the team, finds his true niche as a slot receiver and fills the void that Brandon Carter has left open.

Win: Rather than being thrown into the fire as freshmen, Grayson Muehlstein and Foster Sawyer when they redshirt this year. (see also: Zach Allen) The spirit of competition and familiarity of the system will help what Cumbie, Meacham, and GMFP really want--an offensive identity. 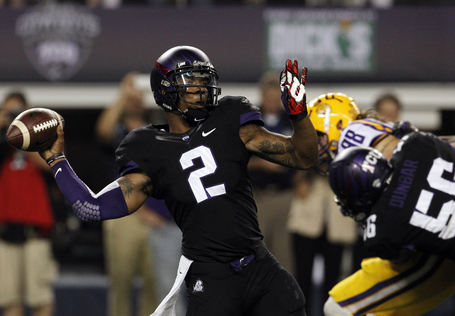 I'm not going to harp on the importance of the offensive line too too much, but if the line comes together and improves from a dismal 2013 season, a Boykin-led offense could really look nice. Boykin cut down the fast food in the off-season and lost the 15 pounds, on top of the baby fat he lost between his freshman and sophomore years.

The confident, Baylor-Boykin is the best Boykin. But even the Boykin from the Texas game in 2012, The Game-Manager Boykin, was brilliant. Neither offense looked particularly pretty, but Boykin was as good as he needed to be...rushing for a team high of 70 yards. He didn't even break 100 yards passing...but then again he only passed nine times (Insert Ed Rooney voice). But as the commander of the Frogs' offense, he did everything perfectly. He was exactly the quarterback TCU needed him to be that game.

How Soon is Now?

After two years of offensive misery, TCU fans have rightfully become impatient. Regardless of Pachall's injury, having two quarterbacks didn't work last season. So the idea of Joeckel coming in, thereby allowing Boykin to play receiver and the young guys to learn the system seemed too perfect. Now Boykin's giving Joeckel a run for his money. If TCU wants to stick with two guys past the Samford game, should the fans trust in the new system? Maybe Meacham and Cumbie have something special up their sleeve.