The questions at offensive line may call for TCU's 'semi-secret weapon', Jaden Oberkrom.

Share All sharing options for: Midweek Musings: Week One.

It's fairly obvious that I was elated with the new offense. However, let's not burn ourselves out on the new Frog Raid quite yet...at least until after the Minnesota game. We've also got a week off, so it wouldn't be advantageous to anyone to start worrying about our offensive line against a gnarly Gopher defense. By all means, the offense could rid themselves of the first game jitters and look even more comfortable in their new system in two weeks. However, the questions at offensive line may call for TCU's semi-secret weapon, Jaden Oberkrom, to become one of the more important kickers in Big 12 history. 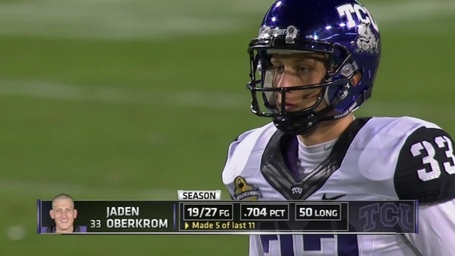 We know three things. We know TCU's really great at defense. We also know that their new offense is better than last year's---which was kind of like the college football equivalent of elevator music. And we know Big 12 teams score a lot. (Baylor, Oklahoma, and--even in losses--West Virginia and Oklahoma State all dazzled last weekend.) The stretch of Oklahoma, Baylor, Oklahoma State, Texas Tech, now West Virginia, and Kansas State would be punishing for anyone (see Florida State and Alabama). Even firing on all cylinders, the new offense will have to play nearly perfect to come out of that stretch unscathed. Hell, even splitting these games will be difficult.

Oberkrom is just about as talented of a kicker as you'll find. While guys like Justin Tucker had great colleges careers, their careers are defined by one moment. One great, game winning kick. Oberkrom has a chance to make a handful.

Going full Marisa Tomei, Oberkrom is dead on balls accurate. Based on how we've played the likes of Oklahoma, West Virginia, and Texas Tech the past couple of years, let's just say TCU will need 30 points a game to win out. This is a lot to ask for in a 6-game stretch, especially if you're breaking in a new offense. We should be smart enough to assume that even if the Frog Raid doesn't muster up a sub-2 minute touchdown drive every time, they'll at least give Oberkrom more chances than he had last year. Especially inside the 30 and 40-- he hit 13 of 14 field goals under 50-yards in 2013. It's also fair to say that with the new offense, Oberkrom may get double the chances he had in 2013. And given the fact that seven of TCU's eight losses in 2013 were by 14 or less--and six were by ten or less--, these games could've had different results had Oberkrom been given more chances.

My money for Oberkrom's breakout game is against Oklahoma on October 4th. Many have Oklahoma on upset alert for that game, and given that it's been a 3-point game the past two years--in the Sooners' favor--Oberkrom could get that kick he so desperately wants, and the one TCU so desperately needs.

TCU won't blow everyone out. They may blow some out. They may even blow really good teams out. But they're not going to have six Samford-esque games in a row. Like last year, they're going to play tight games. But this year, the results could sway in the Frogs' favor. Why? The Krom--hopping on his Vespa and riding off into the sunset, laughing at you.