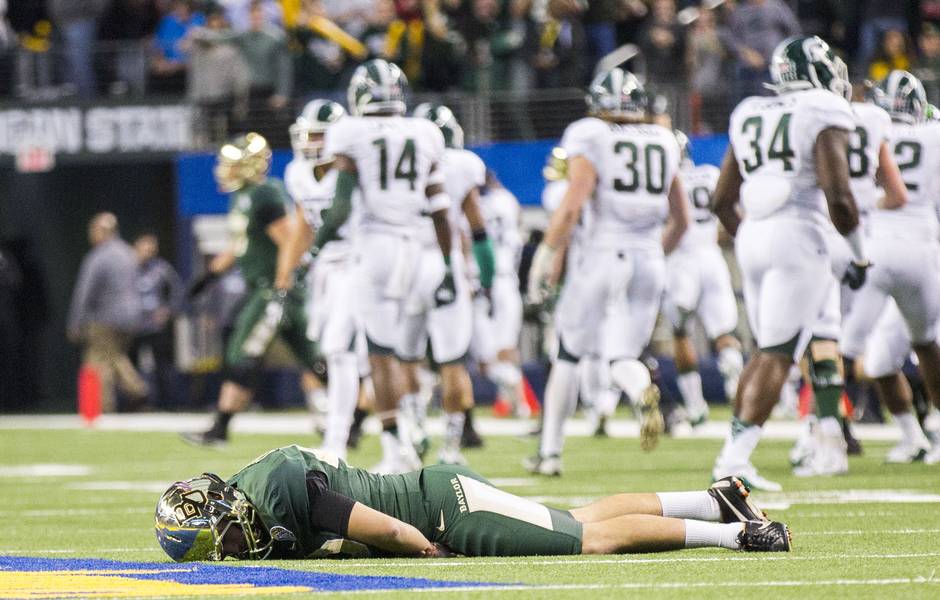 Recap: Coach P, You are the Man and I love the move. Your plumbs are obviously larger than my buddy JP’s, bravo sir… bravo.

Prologue: I don’t truly hate anything… in the archetypal sense anyway. True hate is reserved for skinheads, the Jinjaweed and anyone who’s been fooled into seeing Guns & Roses live after Chinese Democracy. I don’t hate Baylor. I won’t attempt to de-humanize Baylor people. They’re human alright… the part of the evolutionary tree that doesn’t fork. Baylor disgusts me. I look at Baylor like a backed-up toilet… in Cairo. To me, Baylor people don’t wash their hands after using the restroom. Baylor people use the word "irregardless". Baylor people kill endangered animals on captive trophy hunts. Baylor people eagerly await the next Kevin James film. (Expletive which means "to fornicate") Baylor.

Reason #1: Waco – I’ve been to some of the more hopeless, desolate spots on the planet where shrapnel and overpressure are daily concerns. I remember those places fondly when driving through Waco. Traveling through that armpit of a town is like having a tooth pulled; it’s painful, momentary and an instant reminder that you’d rather not do it again. Earlier in the year, I called Lubbock a post-apocalyptic wasteland, but there’s no way I’d heap such high praise on Waco, TX. Gamma ray exposure has a way of throwing obstacles in your path. Waco has no such excuse. Waco is the obstacle. Travel further than 2 streets off of one of the nation’s busiest smuggling routes and you’ll find yourself steps away from a popular spot to abandon cars. It’s a few exits down from a town that built a school next to a company with a penchant for stockpiling anhydrous ammonia. What could possibly go wrong? I gave up on speculation of what the removal of meth production might do to local tax receipts in Waco. It wouldn’t matter because that town couldn’t possibly get any worse.

Reason #2: Terminated for incompetence – Playing Baylor on the Big 12 schedule is like having to wrestle the kid with cold sores in the District tournament. There exists no scenario in which something is not lost. This is how I felt when interacting with my former Baylor-alum-coworker on daily basis. Every morning, I sat in silent, soul-cleaving agony ignoring his droll platitudes, waiting for the moments where he mercifully stopped complaining about his aptitude-deficient offspring or his clueless wife. At least a few minutes of this verbal waterboarding were always dedicated to his love for Baylor athletics. This piece of putrescence never failed in his frequent reminders to the world that he wasn’t "much of a reader" and seized every available 45 minute window to make female wait staff uncomfortable about their employment decisions. His bad jokes skewed heavily to the amputee and little people categories. To top it off, he was one of the more incompetent humans I’ve ever met. Now when I watch Animal House, I add "openly homophobic" and "morally corrupt" to "fat, drunk and stupid" on the now famous list of objectionable states of living. I do this in memory of the most repugnant human I’ve ever known, my former Baylor-alum-coworker.

Reason #3: Jeff Dunham – All comedy is born of tragedy and I can’t think of anything more tragic than attending Baylor. The notion that a man who converses with himself on stage is one of the highest paid entertainers on the planet doesn’t surprise me when his jokes don’t require more than a second grade education to land. But it’s a jalapeno… ON A STICK… get it? I get that the puppet impaled on his hand isn’t the only thing in the building that would flat-line an EEG. "But my grandparent’s love Jeff Dunham", they cry. I’ll give anyone a pass on taste if they were born before the Chosin Reservoir Campaign. For everyone else, Dunham is just a glorified sword-swallower cashing in on the intellectual decline of America. Great job Baylor.

Reason #4: The Biker Shootout… – That’s right, an exchange of small arms fire among rival biker gangs that left 9 people dead. Is there anything more sad and juvenile than the modern outlaw biker gang? Just when they thought a V-twin, a side business selling trucker-crank and infection with the whole hepatitis alphabet weren’t adequate totems of life’s accomplishments, they found out that there were other moronic, socially-deficient people just like them. Disputes you say? Let’s get every waste of oxygen we know together in one place to settle these issues. I know the perfect place. It’s not in some small backwater roadhouse or big patch of dirt out in the desert… instead, it’s a low-rent breastaurant in the parking lot of a Bed Bath & Beyond that’s 5 minutes from Baylor campus. I thought "why Waco" for a few moments and then it came to me. If I were at an elevated risk of incarceration, I’d want to be in a place where the line between "biologically female" and "250lb transient from Brownsville" is blurry at best so as to ease my transition to Huntsville should the authorities intervene.

Reason #5: …the (verb which means "to fornicate" in present participle form) cult –Ask anyone who is aware of cults about the aforementioned topic, and you’re bound to get a Waco thread in your response. Sure, the more seasoned West Coast hippies might have a Heaven’s Gate joke that they’ve been waiting to dust off for a while. You might even hear about Ruby Ridge or Jonestown. But I’d bet every breakfast juice box I get for a week here at court-ordered observation that you’ll hear about David Koresh and the Branch Davidians. I can see it in my mind’s eye right now. "This place is perfect for the compound! We can put the menstruation shed right over there… and the location is soooooo much better for my illegal weapons trafficking business." We all know how this ended. Just like ghost pepper sprinkled on a taco… it was interesting, it induced a little sweat, but once the burning was over most people just forgot about it. 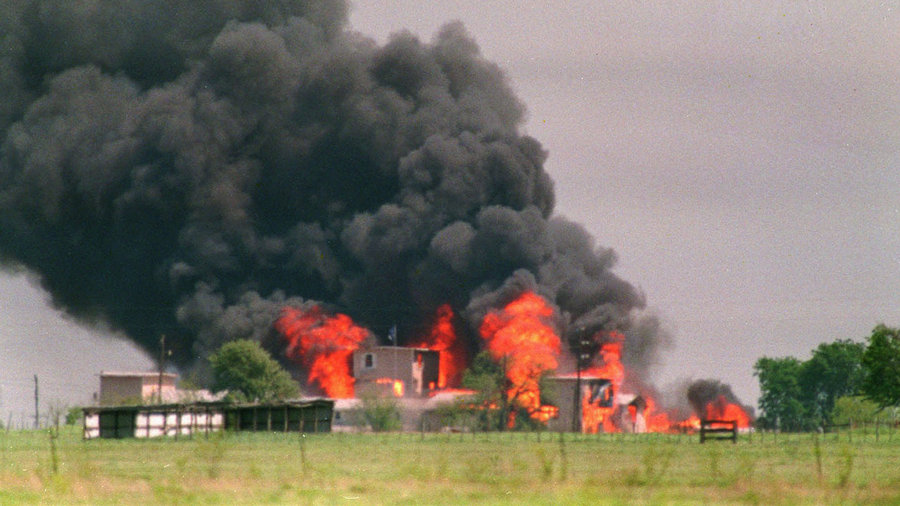 Reason #6: Steve Irwin – For those of you with minimal traffic in the medial temporal lobe, Steve Irwin was this loud, cartoon-character of a person behind the international mega-hit show The Crocodile Hunter. Look around your seat right now for Komodo dragons and Cape buffalo. They’re not there because those animals are smart enough to steer clear of us. In spite of this, crazy-ass Steve (who had no formal education whatsoever) spent years screaming "Crikey!" and dancing about on television sets tormenting the toothed, horned, fanged and everything else in between. Every day I waited for a docile Puff Adder to load Steve’s face up with paralytic compounds and digestive enzymes. Yet for years he avoided permanent injury… then it happened. To me, Baylor fans are just like Steve Irwin. They spend all fall harassing anyone who can’t outrun them with empty, uninformed babble but in the end, they’re vanquished by a more dangerous animal on camera. The only difference is that Baylor fans don’t get the opportunity to destroy the tape before the world sees it.

Reason #7: Amateurism – Besides child beauty pageants and dirtbike "Big Air", nothing does more to inhibit the amateur development of otherwise productive young athletes than the Baylor Football program. I don’t know exactly how, but proof isn’t tough to find. Remember Baylor offensive tackle Jason Smith? He was the 2nd overall pick in the 2009 NFL Draft. You probably don’t remember him because was cut by his 3rd team and out of pro football by the 2013 season. How about Danny Watkins? He was the offensive guard taken 23rd overall in the 2011 NFL Draft (2 spots after the other Baylor first round bust that year, DT Phil Taylor). Then Danny realized that he didn’t like football. Not being good at it, probably influenced his opinion. Both he and Phil are now out of the NFL. This is particularly fun because 4 out of the 5 Horned Frogs drafted in that class (Dalton, Cannon, Kerley and Jones) are still playing in the NFL today. Last but not least, there’s RG3, the 2011 Heisman trophy winner and former NFL Rookie of the Year. The second overall pick looked good early, but has trailed off quite a bit of late. He’s injury prone. He’s divisive in the locker room and he’s best buds with one of the worst owners in pro football. Did I mention he likes the blame game? He’s everything you need in a franchise QB. RG3 can always look to Charlie Sheen for some post meltdown inspiration. Besides, RG3 is in better health than Charlie… he doesn’t have a terminal illness, he only plays like he does.

Reason #8: A blueprint for coach behavior – Long before every boring accountant in Dallas started dressing their kids up in Baylor gear for trips to the supermarket, the only concrete story about Baylor athletics that ever surfaced in conversation was the murder of Baylor basketball player Patrick Dennehy by another Baylor basketball player Carlton Dotson. To compound this vile act, Baylor coach Dave Bliss, decided that it would be a great idea to instruct his players to fabricate the story that Dennehy was paying his tuition by dealing drugs out of fear that the murder investigation might uncover clear violations by Bliss to, among other things, circumvent scholarship limits. Ultimately the scandal was uncovered with sanctions imposed. Only at Baylor would an idiot head coach resort to extortion, obstruction of justice and witness tampering in an attempt to avoid disrupting the season. I should note that no criminal charges were filed against Bliss (I guess one can’t obstruct justice if it isn’t taking place). At the end of the day, this scandal laid the foundation for Coach Briles and the old-fashioned way he runs his team. Deny, deny, deny.

Reason #9: Denial is not just a river in Waco – It’s good to be Art Briles. He’s built a national contender with his high powered offense. Coach Briles is high enough on the ladder that he doesn’t need to concern himself with the details. I’m not sure Art has really dug in on the current climate in the Crimea. I’m sure he’s not up to date on the Presidential race. It’s just too much information. Did Art know his son was involved in any recruiting violations? Not aware. Did he know one of his assistant coaches was on the opponent’s sideline in a game against a Big 12 conference rival (not that it did them any good)? Nope, no one told him. Did Art knowingly recruit a known woman batterer to his program after the freshman All-American was dismissed from another program? Coach Briles just figured the guy wanted to be closer to home. Just how unaware is Coach Briles? Tubes of empty airplane glue in the locker room? Someone must be a model enthusiast! Someone offers Coach Briles some premium stereo equipment in the Whataburger parking lot? It must just be his lucky day! He doesn’t worry about the NCAA or players on his roster who’ve given up on consensual relationships. Coach Briles’ day is simple. He’s got to make sure Kendal has enough finger tape (and find out why Kendal keeps spiking his coffee with cinnamon for that matter). He’s got to make sure one of these is handy in case he needs to vet any recruits. He’s got to make sure everyone on the team knows when to fake injury. There’s a ball game on Friday.