TCU Baseball Preview: The Night is Dark and Full of Bears

Coming off a wonderful run in LA, TCU kicks off conference play with the um--hated, and struggling Baylor Bears...

Share All sharing options for: TCU Baseball Preview: The Night is Dark and Full of Bears

Using a soccer (née football) reference for a baseball/football analogy may be heresy but here we go; there was once a soccer player named Roy Keane. Keane, a scary center-mid from Ireland, and who played the majority of his career with Manchester United, was injured during the 1997-98 campaign by Leeds player Alf-Inge Haland--forcing an end to Keane’s season. Four years later, Keane, in the fifth minute of the game, took a shot to Haland’s knee--essentially ending his career. 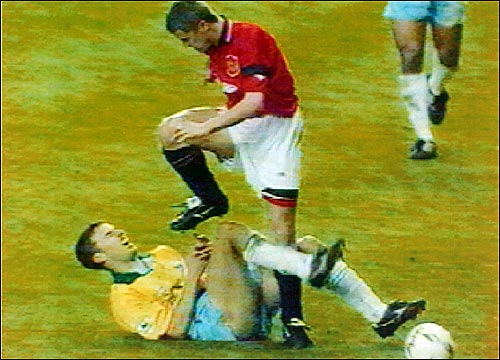 (This picture is from a separate event, and the player on the ground was a colleague of Keane's once they both retired and became commentators)

While I don’t support this kind of violent revenge: the spirit of it, is what I’d like to see this weekend. After months of annoying 61-58 hashtags, I’m so over North Temple and Baylor, that I might as well be in another dimension ala the dumpster fire that was Interstellar. While they loved baseball a few weeks ago, but have since forgotten about it after their recent slide, Baylor fans, and their team, have their work cut out for them against a soaring Frog team.

Don’t go for the cheap shots, but as Gary says, Make it Personal.

quick side note: today's preview is brought to you by: FIRE

Mitchell Traver will make his second Friday start in his relatively new role as the Horned Frogs’ Friday guy. This a dream, because having Preston Morrison throw during the day--and to a lesser degree Alex Young in addition--just works better with the Human Torch Traver throwing at night. This is a pretty dream 1-2-3, and I've been pretty galvanized on how smooth it's been for both Traver and Young. It only has one lefty, sure; but when your right-handers are Morrison and Traver--there’s not a lot of room for complaints. Traver should attack the Bears well on Friday night, and more than likely will end up with more strikeouts than his counterparts.

Preston Morrison (3-0, .75 ERA) is once again, the Big 12’s best pitcher. Sure, he may have finally given up a run--but considering it was against the defending CWS Champs, Vanderbilt, it’s safe to say that no Big 12 pitcher, and no Big 12 team, has been as impressive as P-MO and the Frogs. Traver and Morrison are also third and fourth respectively (Big 12) in opponent BA with .189 and .193--this is assisted by TCU's league leading defense.

And it gets worse: Alex Young, who’ll start Sunday, leads the Big 12 in opponent BA (.189) and was absolutely incredible against UCLA last Saturday. Attacking the Bruins’ brilliant top half of ther lineup and only allowing one hit within it, it's encouraging to think what he'll do against a struggling Baylor offense. Traver and Morrison have overshadowed Young so far this season, but at this rate, Young could end up being "Big 12 Pitcher of the Year".

And it gets even worse; even if Baylor keeps it really close to the chest in any game this weekend, they’ll have to face the best closer in college baseball in Riley "La Flama" Ferrell. The weekend three, plus Ferrell, truly makes for a Fantastic Four for these weekend series.

Hitting wise, we can probably combine the preview. Because as we’ve said, there’s not a whole there for Baylor. They’re hitting .261 as a team and averaging just 4.5 runs per game. Basically, senior outfielder, Logan Brown is only Baylor currently pulling his weight offensively.

As the Baylor staff has a team ERA of 5.54, this could be a really exciting weekend for the TCU offense. TCU’s been shuffling their offensive deck quite a bit and have already used 11 combinations--mostly rotating the second spot. And I know I harp on this a lot, and while I still think Crain would be best suited for it, I really like Keaton Jones the most in terms of eligible candidates for the two-hole. He’s coming off a wonderful weekend in LA, and should this continue, he’d be ideal for hitting in that slot permanently.

Going off of that, I think Derek Odell is simply more comfortable hitting lower in the lineup--he’s hitting .250 right now, plummeting from where he was just a couple of weeks ago. However, if Odell stays lower in the lineup, it’s more than likely he’ll creep back up into that .300 area. The Bears simply don’t have the fire power to subdue a balanced lineup like this. None of their starters have wins—and their bullpen, which is only slightly better, will have a difficult time as well. If Baylor does get a win at any point this weekend, it’ll come from the bullpen.

Not talked about enough: Dane Steinhagen and Nolan Brown. Both have over 40 ABs, and lead the team respectively in BA (.333 and .318) and have a combined 28 hits. We’ve talked about balance recently, but these guys plus Elliot Barzilli are living proof of that. The learned leadership of Cody Jones and Keaton Jones--and I know Odell and Garrett Crain will get out of their slumps--plus the balance dominated by youth throughout the rest of lineup is going to compliment the pitching perfectly and is thus what makes the Frogs one of the deadliest teams in the country.

I hate making a prediction like this, but the risk is worth the reward. Despite OBP problems, the pitching and young guys shine. F R O G S sweep.