If you're a coach planning for an opponent, do you have a plan B if your original idea doesn't work?

A lot of the subject matter surrounding football coaching strategy is how to adapt to the unique challenges you see from your opponent each week.

By using a play that's becoming more and more common across college football, an adapted form of the power scheme, TCU does just that on a regular basis.

The trips formation to the wide side of the field has stretched the defensive front to the limit, leaving only the Mike linebacker stacked on top of the nose in the middle of the box.

Speaking of spacing, the receivers in the slot aren't running any kind of bubble screen or pass routes to get open. Instead they're just searching out the nearest defenders across from them and going to block them. This is important, since the QB is opening to his left on his play, he wouldn't be able to see the defense's reaction after the snap as he's supposed to be looking in the opposite direction anyway. 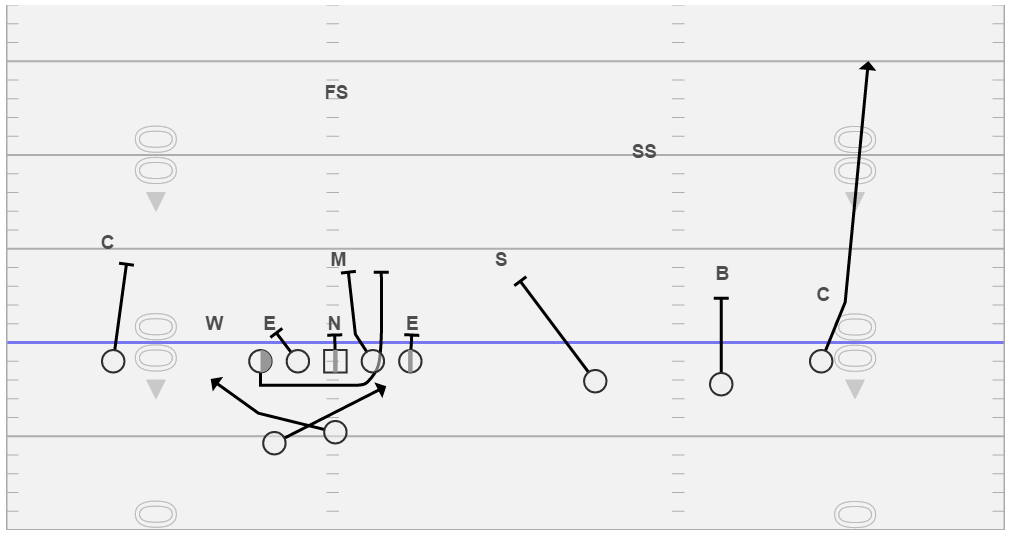 Now here's what really sets this play apart from the more traditional scheme: The tackle, not the guard pulls around into the first hole he sees, and that should be the A gap against this front.

Because of the formation and the spacing conflicts it causes, the Mike linebacker can end up with two blockers on him, while the Will linebacker is sitting to the single receiver side waiting to pounce on any quarterback keep.

A lot of people call this a wrap scheme and that's fine.

The bottom line is that it's a play where the offensive line blocks down and another lineman pulls around. In other words, it's just another way to get where you're trying to go.

But why pull the tackle instead of the guard?

Well, simply put, teams are always looking for for ideas on how to run the same play different ways.

One of the biggest potential problems with running the power play is the amount of penetration that can come through the B-gap once the guard leaves and pulls around to the other side.

On the traditional power play, you've got a big hole between the center and the tackle they both have to work hard to close before the defense slips in and causes problems in the backfield. If the defender gets a jump, they can beat the tackle across his face and blow that play up in the backfield before it starts.

This is especially true if you're a defense facing a spread-style attack like TCU, who isn't afraid to run their quarterback in any number of ways.

This is why a lot of odd front teams play with their techniques to the side of the back. There are all kinds of stunts and blitzes you can pull to try to give the offense trouble in the one-back option game, including cheating the defensive end to the inside leg of the offensive tackle to whichever side the back is lined up on.

This is a way to get a headstart on any quarterback keepers around the edge, by taking away the inside gaps and freeing up the Will linebacker in this case to handle the quarterback. This is something teams practice a lot during linebacker drills during the week, putting their best guys in a position where they're ready to contain the quarterback if he decides to keep the ball.

The point is, this is a way to create a solid wall of four offensive linemen blocking one way instead of two separate groups of linemen (RT, RG, C together, then the LT on the backside) trying to close an area between them.

Like we talked about yesterday, every "crazy" play that coaches come up with has a reason.

The one-on-one block of the right tackle is key

This is probably the toughest block in the entire scheme because the right tackle doesn't have any real angles on the defender, and he's gotta deal with the guy across from him straight up.

His first step should be with his inside foot to help protect the B-gap, but if the end slants inside too hard he can still wash him down and create a large gap to the outside where the guard and the back can follow through.

This can turn into a positive for the back however, as the block of the right tackle can tell him where to go. It's also another great reason why the innermost slot receiver is looking for that linebacker to block instead of running some kind of bubble route.

The QB can read it (some times)

Remember we talked about all the different looks a defense can give you on the backside of the play?

That Will linebacker is still sitting there, and if he decides to chase the tailback (unlikely) there's no one left to play the QB. Trevone Boykin made a living off of this last year, and it's a big reason why this offense was so dangerous.

Put another way, if the defense TCU is facing has a history of bringing a lot of pressure from the boundary, including any kind of corner blitzing, the quarterback has the ability to keep it.

Still, usually this works best as a regular give, and unless the defense is showing some kind of unusual pressure from that side, he'll hand it off.

The chess game continues as offensive and defensive coaches go back and forth and come up with new wrinkles to attack one another, and this play is no different.

TCU's defense grabs a lot of major headlines, and for good reason, but the offensive unit has more than held their own the past few seasons, and they're a major reason why the Horned Frogs have been and will continue to be a dangerous opponent this year.