Easily the position with the biggest shoes to fill for 2016, so who is going to be under center for the Frogs this upcoming season?

Easily the position with the biggest shoes to fill, TCU walks into 2016 with no surefire answer at quarterback, but that isn't a bad thing. Remember the summer of 2014, when the QB race was between Matt Joekel and Boykin? The following season turned out pretty well if you ask me. While we don't have an incumbent, due to the departure of not one, but two TCU legends (Boykin and the lord of San Antonio Bram Kohlhausen) the spot behind center just got a whole lot more interesting. As of this moment, the job looks like it is a battle between Kenny Hill (Trill) or Foster Sawyer.

In my opinion (which you all should trust my word as law, since everything I have ever said ever is correct 100% of the time) the job is going to go to Kenny Hill. He's had some experience under his belt, and we've seen Gary give the nod to the guy with more experience in the past.

While his time at A&M was more than well documented, Kenny was able to show flashes of how good he could really be. I mean it's not every day that you see a player set school passing records in his first start. In 2014, Hill completed 66.7% of his passes, for 2649 yards, 23 touchdowns, and 8 interceptions during the 8 games that he played. Of course he tacked on 156 yards on the ground as well on 52 attempts.

As always, you can't mention the good without the bad. Early on Hill had made a couple of mistakes off the field (similar to another GREAT A&M quarterback) and it didn't help that the locker room culture was still that of instant success regardless of the preparation. I'm not trying to throw shade at TAMU, but the culture of the program at that time seemed to be...well you tell em BBD. Anyways, we're all hoping for a huge comeback season for Mr. Hill.

To me, Hill just looks like he fits the offense better, with athleticism that matches that of Boykin and a quick release, I think Hill is the right man to give the nod to. But we can't count out everyone's favorite Fort Worth son just yet... 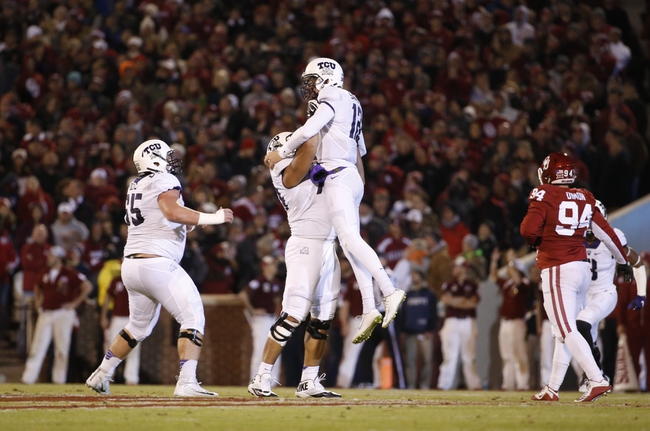 What we saw of Foster last season wasn't much. There were flashes of promise and flashes that reminded us that he was just a redshirt freshman. Of course it is really hard to grade someone when they are thrown to the wolves (one of the best defenses in the Big 12) with about a week to prepare or when the starting QB goes down and the backup doesn't perform very well and you have to be the guy on very short notice. So while I won't say I'm impressed with what I've seen, I'm nowhere near giving up on the Foster Sawyer hype train. It's like walking away from Breaking Bad just because the first episode is slow.

We really only saw Sawyer twice last season: against Kansas and against OU. Against Kansas (a game that I can safely say was the ugliest TCU game I've ever seen where they came out with a W) Foster completed 1 of 7 for 42 yards. That being said, his one completion was a 42 yard touchdown pass to Shaun Nixon. Now moving on to the not-so-stellar OU game, where Sawyer went 8 for 18, passing for 107 yards, with one touchdown and three interceptions. The three interceptions all came on deep throws that were essentially arm punts, but were still picks nonetheless. Again, judging a redshirt freshman with a week to prepare for the best defense in the conference is a bit harsh...so I can't really say I know what Foster can really do.

That being said, I really want to know what he can do. He is 6-5 and has the arm power to throw an absolute gorgeous bomb off of his back foot and with two older guys gone, we may be able to see Sawyer in action more often. Whether it is as the main guy or in more of a clean up role.

A roster is only as good as its depth and if last year was any indication, the more depth the better. At this moment, the three other quarterbacks on the roster are Grayson Muehlstein (AKA: The Mule), Brennan Wooten (AKA: WOO like the sound that Swizz Beatz makes in Kanye West's Famous), and walk on Jordan Kitna (son of former NFL QB Jon Kitna). Muehlstein is going to be a redshirt sophomore, while Wooten and Kitna are both freshman.

With Wooten, I feel like he deserves a special shout out for this, but apparently he was the guy this recruiting season for TCU. By that I mean he was making calls to some of the other recruits, selling them on TCU and getting them to absolutely buy into the hype. So thanks for that Brennan, you make all of our jobs here at FoW a lot easier!

When you look at these three on paper, it's really interesting how different they are from one another. Mule is more of a dual threat kind of guy, where as both Kitna and Wooten are pro style quarterbacks. Looking at it now, barring the worst injury bug 2.0, don't expect Kitna or Wooten to play much if any this season; however, look forward to them in the next couple of years. After all, it never hurts to have more competition in the summer.