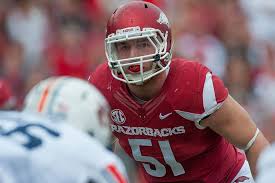 A Few Things to Know about the Razorbacks...

Before I start I would like to say good luck to you guys this Saturday. Should be a fun game between two good football teams. As an Arkansas fan, I thought it would be nice to come over to Frogs O' War and give you guys a little bit of a rundown on what the Hogs are like. Hope you guys enjoy!

The Razorback offense is a lot different from years past. Sure, Arkansas still likes to run the football a lot, but the Razorbacks will throw it around more than they have these past few years. Austin Allen will be playing in his 2nd football game as a starter. His first start went okay, going 20-29 for 191 yards and 2 TDs (as well as 2 INTs...mostly under pressure early in the game). Austin, unlike his brother Brandon (the former QB), will throw it around a lot more often and can throw it much deeper. Austin is much more aggressive and is prone to INTs, but can really be someone that can rack up yards in chunks IF you give him time. As far as the running game is concerned, Rawleigh Williams III is the top RB. He had 20 carries for 100 yards against Louisiana Tech, and is a big play maker if you give him space or room. Kody Walker is the big back, who can get you 3 yards or more every time no matter how many people you bring. Look out for him if the Razorbacks are in the Red Zone. There is also a freshman running back to watch for the Hogs, Devwah Whaley who was a 5 star recruit out of Texas. The wide receivers corp is the strong point of this team, and is perhaps one of the deepest in the SEC. Keon Hatcher is the top Wide Receiver. He is fast, strong and deadly in the open field. Drew Morgan is another weapon that the Hogs will utilize. Dominique Reed is a speedster that can outrun the secondary in the blink of an eye. Jared Cornilies is utilized mostly for Jet Sweeps and slants, but is absolutely deadly doing it. Then there is the Tight End Jeremy Sprinkle. On the field, this guy looks like a monster, and he is. If he is open, watch out. He can't really be brought down with one guy, so one on one coverage won't work. All in all, Arkansas has an offense that can really be the best in the country when Austin Allen is clicking. Give him and the running backs protection and time, and the Hogs will rack up 50 points in a hurry...

Then there is the defense. While certainly the defensive line is stout, the secondary, not so much. The D-Line consists of D. Wise Jr., Jeremiah Ledbetter, Taiwan Johnson and Karl Roesler. Both Wise and Ledbetter are the two that TCU must keep an eye on. Those guys are sack machines if you don't get a big push on them. Linebackers are also a good unit on this defense. Brooks Ellis is a tackling machine, and usually brings you down if he gets a hold of you. Dre Greenlaw is probably the best defender on the team, earning SEC Freshmen of the Year honors last year and getting an INT in the game against Tech. But then there is the secondary. This unit really brings the Razorback Defense down. Jared Collins is probably the best CB, and usually is put against the top receiver on the other team. While he is good, he is prone to just dumb lapses where he can't defend at all for a play or two, and that is costly. The FS Josh Liddell is also, like Collins, prone to these lapses. The good news for the Hogs secondary is that they get their best CB, DJ Dean back for this game, and will be a big boost to the secondary. Still though, the Razorback Defense is prone to lapses and mistakes, and those prove costly in games. If the D-Line doesn't get push, that spells trouble for the Razorbacks.

So there you have it! Hope you guys have a little info about what the Razorbacks have to offer! Good luck this weekend guys!