Newgrounds is an entertainment website and company founded by Tom Fulp in 1995. It hosts user-generated content such as games, films, audio, and artwork composition in four respective website categories, and also provides visitor-driven voting and ranking of user-generated submissions.[1] Fulp produces in-house content at the headquarters and offices in Glenside, Pennsylvania.[2]

In the 2000s and 2010s, Newgrounds played an important role in Internet culture and in independent video gaming in particular. Newgrounds has been called a "distinct time in gaming history", and a place "where many animators and developers cut their teeth and gained a following long before social media was even a thing".[3]

User-generated content can be uploaded and categorized into either one of the site's four web portals: Games, Movies, Audio, and Art. A Movie or Games submission entered undergoes the process termed "judgment", where it can be rated by all users (from 0 to 5 stars) and reviewed by other users. The average score calculated at various points during judgment determines if whether the content will be "saved" (added onto the database) or "blammed" (deleted with only its reviews saved in the "Obituaries" section).

Art and Audio compositions are processed using a different method called "scouting". All users can put art and audio onto their own page, but only those that are "scouted" will appear in the public area. Like the judgment system, it stops stolen content, spam, or prohibited material reaching the public area, relying on users and site moderators. Once an individual is scouted, they are given the privilege to scout others. 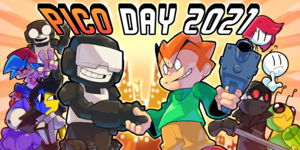 Content and context are liable to be reported for review to the moderators and staff members by flagging it for violations to the site's guidelines.[4] A weighted system recognizes experienced users and gives their flag more voice.[5] Newgrounds' homepage includes featured submissions from each category, as well as awards and honors to users whose submission that fall under the site's requirements to earn them.[6] Members of Newgrounds also organize animations called "collabs" through the discussion forum on the site.[7][8] Some scholars noted that while hundreds of these "collabs" are produced every year, only 20% are completed due to stress on those making the animations, while other scholars said that animators maintain a "strong sense" of authorship and ownership of what they produce, especially solo animators.[9][10][11]