All Hail the Kings

The TCU pitching staff has given up two earned runs in the past 72 innings. But is this staff better than 2010?

Share All sharing options for: All Hail the Kings

The 2014 TCU pitching staff has been the talk of college baseball for the last three weeks, and the Frogs continued to dazzle this past weekend against Cal State Northridge and increased their win-streak to 8 games.

The sweep of sweep of the Matadors added to TCU's outstanding April record, bringing TCU's record to 15-1 for the month. Adding to an already dominating April, the Frogs have now allowed just 2 earned runs over the last 72.1 innings.

2010: Matt Purke in the first game of the Super Regional in Austin is still one of the most impressive pitching performances I've seen in person. Purke strutted into Austin and struck out an impressive 11, but it felt like Kerry Wood's 20 against the Astros in 1999.

So thinking back to that series in Austin, and comparing it Brandon Finnegan, Preston Morrison, and Tyler Alexander's performance a few weeks ago, and really the whole season, which pitching staff stacks up better?

Purke was the most electric pitcher I've seen play at the college level. The theatrics of Purke; the slightly crooked hat, the rec specs, and the first pump, added to Purke's dynamic. Purke also had an absolutely filthy 142 strikeouts for the 2010 season. 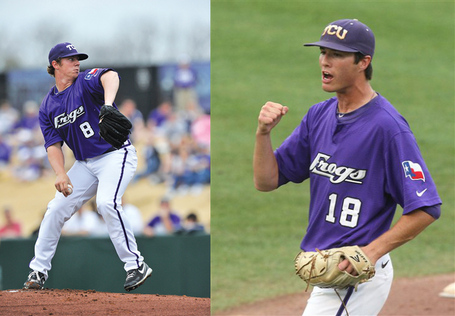 In addition to Morrison's statistical advantage, the complete change of pace from Finnegan to Morrison, makes Morrison a deadlier Saturday starter. Opponents get the Randy Johnson heat and nasty slider on Friday, then the Greg Maddux-flow on Saturday. It's a combination that's getting tougher and tougher to beat. 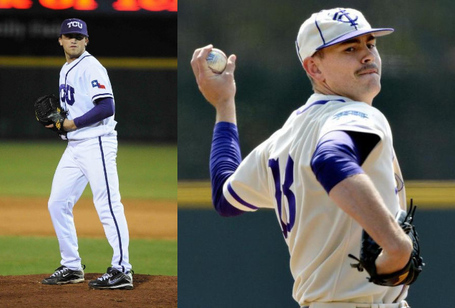 Alexander is growing into the role, but Maxwell was a brilliant and consistent weekend closer, something TCU's lacked this season and is where their highest percentage of losses have come from. If you're going to play a Regional, or Super Regional, you want a guy who will suffocate the opponent nearly as well as your Friday guy.

Finny, and even P-Mo to a degree, have taken the spotlight from Ferrell. But he's just as integral to this staff as both of those guys. He's absolutely lights out. No one wants to face Riley Ferrell.Merck and Lockwood were really effective, but there's really not a lot of room for argument here. The 2014-Ferrell is the best closer TCU's ever had. 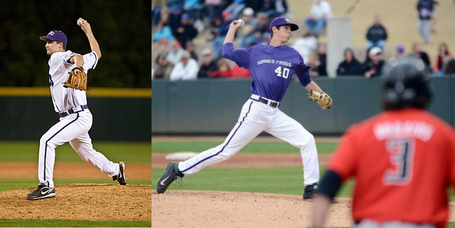 Teakell's improving, but Appleby was a master-class middle-innings guy. One of Appleby's finest moments was against the CWS loss to a Trevor Bauer led UCLA squad. After Winkler and Paul Gerrish gave up 6 runs early in the game, it was Appleby that came in a settled down the Bruin hitters and kept TCU somewhat alive.

The two teams have equally dominating weekend starters, while 2010 holds the advantage for middle-relief and 2014 has the advantage of a lights-out closer.

There's been a pretty clear downward trajectory since the NCAA implemented the BBCOR bats in order to reduce the extremely high velocities which the old bats produced, thus protecting the pitchers. A good move in my opinion, but then again, I covet the day college reverts to wood bats. Given that, it's easy to think the 2010 staff had it harder. But it goes both ways. Yes, the 2010 guys had to face the bats with more pop, but the 2014 staff didn't have the luxury of their own players using these bats either, thus having less wiggle room.

Regardless of the BBCOR, top to bottom, the 2014 staff is a more complete staff. But only by a hair.