Another weekend. Another clinched series.

Share All sharing options for: Monday Afternoon Manager: May 12th

It's pretty easy to get spoiled with winning, especially when you've been playing like TCU for nearly two months now. But while the Frogs proved that they're still human, they showed us why they're still the hottest team in college baseball. 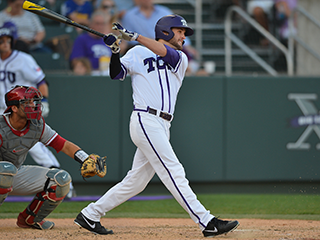 The Sooners jumped out to an early 2-0 lead in the 1st, but Finnegan was able to shake off his comeback jitters pretty quickly. Finnegan threw nearly 30 pitches in the 1st, but by the 3rd inning, Finny looked his normal self and finished the game with 4 strikeouts, while improving to 8-2 on the year.

Despite OU's early lead, the Frogs responded with a big 3rd inning that began with a Kyle Bacak walk. With one out, Boomer White hit a rope up the middle that probably should've been a double play, but was bobbled instead and the costly error proved fatal for the Sooners. Garrett Crain, aka Captain Clutch, drove in two runs with a perfectly placed ball to left and put the Frogs up 3-2.

Thanks to a Dylan Fitzgerald homer and a two out rally started off by Cody Jones in the 4th, the Frogs capitalized on their 7-2 lead in the 7th. 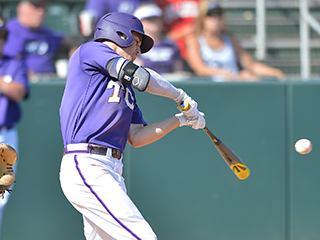 P-Mo and Oklahoma's Jake Elliot had a nice pitcher's duel going for a minute and neither team scored until Oklahoma put up two in the top of the 6th. Despite not coming up with the win, Morrison only gave up only one earned-run in over six innings of work.

The Frogs nearly put together a comeback-win in the 9th thanks to the bats of Keaton Jones, Derek Odell, and Boomer White. After putting up a five sport in the 9th, the TCU bats nearly finished the comeback win in the 10th. The Frogs loaded the bases, but their effort was thwarted by an Oklahoma double-play to end the inning. Oklahoma went on to score two in the top of 11th, to which the Frogs could not answer.

I Get Knocked Down, But I Get Up Again: TCU 9, Oklahoma 1 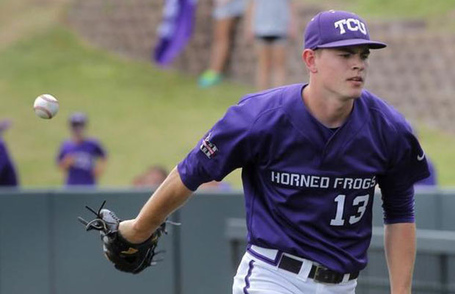 Tyler Alexander shined and delivered his most effective performance of the season thus far. Alexander only continues to improve and finished the day with three strikeouts, zero walks, and gave up only one run in 8 innings of work. Alexander also got some help from the brilliant leather of Derek Odell and Keaton Jones.

The bats were in full-effect on Mother's Day as TCU broke it open early in the 2nd, putting up four runs. The runs TCU collected in the 4th were all they would need for the day, but TCU tacked on five in the 4th and picked up the series win.

You can read the polls as they update here.

A lot of folks would give Boomer White the offensive MVP for 2014, but during this hot streak, it's Crain that's emerged as TCU's crown jewel at the plate.

The numbers don't have the wow factor that Finnegan and Morrison usually have, but the freshman out-shined both of those guys this weekend in a brilliant Sunday start.

Because I Can: Keaton Jones

Continues to do everything we need him to do at the plate and still has the best glove in the Big 12, if not the entire nation.

The Frogs are still in a prime position to earn a National seed in the tournament. Voters love nothing more than momentum and the Frogs still have plenty of gas left in the tank. But what will it take exactly?

"If the Frogs win the Big 12 regular-season title, I think they’re in good shape for a national seed. They could conceivably snag a national seed even without a Big 12 title, if they win those last two series (which are winnable, vs. Oklahoma and at Baylor), because their RPI is strong and the committee is gonna love their blistering second half. Momentum matters."-Aaron Fitt, Baseball America

We should sweep Baylor anyway, but a sweep in Waco plus winning the Big 12 tournament would make TCU a lock for a National seed. They could probably get by with a loss in Waco, but judging on how the Bears are hitting the ball, the match-up doesn't favor our Green friends.

However, the Baylor series may not have much weight at all. The Frogs have the highest RPI in the Big 12, but a series in Waco won't do too much to help it. Bottom line: The National seed is going to come down to the Big 12 Tournament and more than likely, it will be Oklahoma State and TCU dueling for the spot.

A Trial by Combat.