Share All sharing options for: Monday Morning Manager: May 5th

Another season of not living up to the expectations was looking more and more likely, but the past month has been a different story. Maybe it was because Joseph Gordon-Levitt made a wish for TCU to find their groove. Whatever it was; since April 1st, the Frogs have been unlike any other team in college baseball, winning 19 of their last 20. 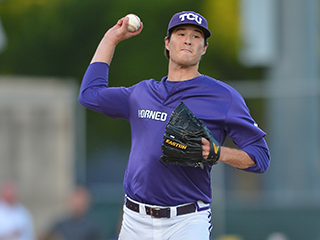 With Finnegan taking the weekend off (no reason to risk it against a lowly Wildcats team), Preston Morrison started the Friday game. In what was arguably his finest performance of the season, P-Mo continues to be in top form; tossing a complete game shutout, striking out seven and only giving up one walk in the process. Morrison's ability to keep hitters from making any sort of solid contact is only getting better and once Brandon Finnegan returns, their 1-2 combo will continue its authoritative grasp on Big 12 hitters.

On offense, the Frogs' bats opened up the lead early in the second inning that began with a Kevin Cron base hit. Thanks to a Jerrick Suiter double and the ever-effective Dylan Fitzgerald each driving in a run, TCU jumped out to a 2-0 lead. The Frogs continued to chip away, highlighted by Kevin Cron, who collected four hits in the game. Also, let's just take a moment to give some credit to Garrett Crain, who just continues to be the unspoken machine for TCU's offense. In addition to scoring one of the opening runs in the second, Crain also drove in Boomer White on a sac-fly in the 6th to put TCU up 4-0. 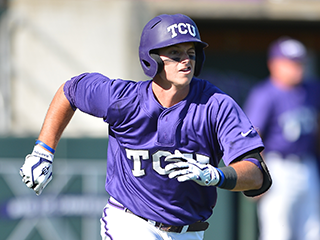 While it shouldn't come as any shock, the TCU pitching didn't disappoint Saturday. Well, unless your disappointed by a run crossing the plate.

After Alexander gave K-State an early lead, the Frogs rallied back in the bottom of the 4th to make it 3-1. Dylan Fitzgerald led off the two out rally with an RBI single, but it was Keaton Jones' monster triple that gave the Frogs the lead. With his five assists in Saturday's game, Jones also surpassed Brad Wallace's career total of 481 assists to move into fifth place all-time.

And this is where we pause to give Keaton Jones all the credit in the world. Jones has become the Cal Ripken for TCU on many levels. Coming to Ft. Worth as a scrawny pitcher/shortstop walk-on, Jones has since settled at short and has started 164 of 165 possible games. Jones has arguably the best glove in TCU's history and has demonstrated his lock-down defense since he was a freshman. Even though he batted a measly .166 his freshman year, I always wanted him in the lineup because he defense was unparalleled to anything I've seen at the college level.

I had a class with Jones when I was a senior during his freshman year and even in May of 2012, he could barely pass for a 15 year old. Which made sense, because most TCU fans were astounded any time Jones hit the ball out of the infield. But Jones did what everyone wanted him to do that off-season and came back with 20 pounds of muscle in 2013. He improved his average 70 points in 2012, drove some guys in, and continued his one-of-kind defense.

Two years removed from David Vanderwerken's short story class and hitting better than he ever has, Jones has grown into one of the most important leaders in the TCU clubhouse in addition to being one their most dangerous assets. 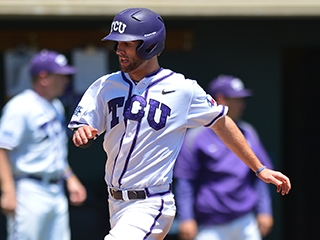 I'm not quite sure what A.J. McCarron means by #PissedOffForGreatness, I do however know he doesn't like Lorde because of all the "evil" she brings to the world. But maybe this pissed off for greatness is what TCU experienced just over a month ago.

Is it just me or are some of the Grammy performances so far seem to be really demonic?? Looks like there is a lot of evil in the world..

Down 3 runs going into the bottom of the 5th, TCU sent 11 batters to the plate, scoring 7 runs to take an 11-7 lead. The Frogs had another monster inning in the 6th; and with the help of some Kansas State errors and the bats of Keaton Jones, Garrett Crain and Dylan Fitzgerald, TCU put up 10 and run-ruled the Wildcats to finish the sweep. Trey Teakell, now 4-0 on the year, gave up only one hit in 3 innings of work.

Complete game, 7 strikeouts, one walks, and a shutout. Yep, that'll do.

Like Schloss, I probably can't say much that hasn't already been said. But this turnaround has been nothing short of brilliant. But it shouldn't come as a shock either. With the Three Kings; Brandon Finnegan, Preston Morrison, and Tyler Alexander all in top form, TCU's future opponents are going to have a very, very difficult time putting up any runs. Additionally, if the bats keep producing like this past weekend, the Frogs should be nothing less than feared going into post-season.

Bottom Line: TCU's pitching will likely work its way around a lack of offense anyway, but this recent surge of offense has made the Frogs unstoppable at the perfect time.