Of course, all coaches say things like that, especially in the week prior to the game. "It can deceive you," is how the coach described TCU's 4-2-5.

But we have good reason to think Coach Dana really believes it. He tangled with the Horned Frogs a couple of times, and came away the worse for it.

In 2006, Dana Holgorson was Mike Leach's co-offensive coordinator and inside receivers coach when the Sand Aggies came to Fort Worth. The Tech Tards never got their air raid off the ground, and the rest, as they say, is history. (Fat little girlfriends may or may not have had anything to do with that... it probably depends on who's asking whom.) 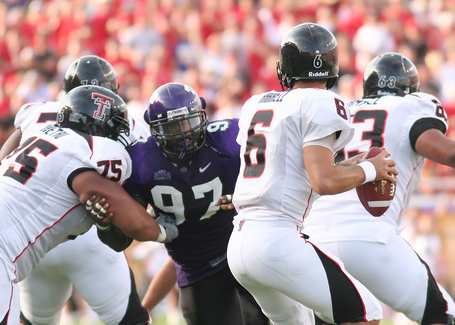 And Dana Holgorson ain't the only one: current WVU offensive line coach Bill Bedenbaugh was the Red Raiders' o-line coach in '06. One only imagines that Tommy Blake still haunts the Mountaineer coaches' dreams, a streak of black death with that Darth-Vadar neck gear, roaming free in the backfield, breathing purple fire.

At least, that's how it looked from the east side stands.

This year Holgorsen has changed in his steed and saber for a musket and beard; probably it's an upgrade, but the Horned Frogs won't notice. Ask Baylor.